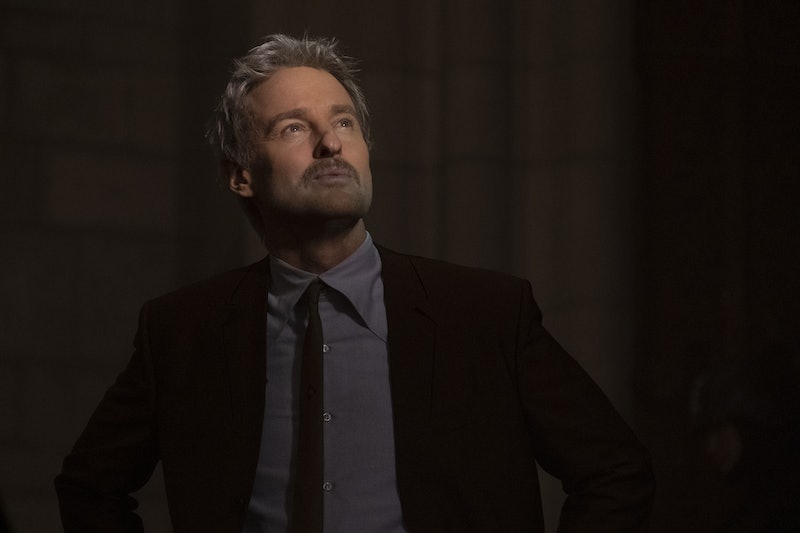 The Marvel Cinematic Universe (MCU) is as interested in exploring its expansive tapestry of superhero stories as it is about teasing what’s to come. Every MCU show and movie is littered with clues about what could be coming, and the first episode of Loki proved no different. The jam-packed premiere was full of emotion, subversion, and dynamite dialogue, answering several questions about the ramifications of Loki’s (played by Tom Hiddleston) actions following the events of Avengers: Endgame. However, like any MCU property, it also raised several questions during an early scene in a French church.

The year is 1549, and Mobius M. Mobius (played by Owen Wilson) and the Time Variance Authority (TVA) are investigating a timeline deviation in Aix-en-Provence, France. There, they inspect the remains of a previous TVA unit who were killed and had their reset charge stolen while on a mission at the very same church. As Mobius examines the bodies, he deduces that the fatal wounds are consistent with stab marks and that the dead TVA unit was ambushed, suggesting there may be a pattern. Now, if there’s any MCU character known for their affinity for daggers and trickery, it’s Loki.

As Mobius looks over the crime scene, a TVA agent vaguely says, “It’s him.” The statement receives essentially no follow-up as Mobius and the rest of his unit shift their attention to the intrusion of a child, who is standing in front of a large stained-glass window depicting a red, horned devil with a blue tongue. Upon conversing with the child in French, Mobius asks, “Do you know who did this?” The child ominously turns to the devil figure, and Mobius remarks, “Don’t worry, that devil is afraid of us.”

As Mobius and the child talk, he notices a tint on the kid’s teeth due to a blue candy labeled “Kablooie.” The carton itself has a sinister, troll-looking blue face on it, to which Mobius remarks, “Devil bearing gifts.” Loki is a show about variation, and it’s here where the endless possibilities of Marvel’s newest show start to materialize. Here’s everything you need to know about the Kablooie candy and that sinister red figure from the first episode of Loki.

If you’ve participated in any fraction of discourse around Marvel’s seminal streaming show, Wandavision, you’ve heard the name Mephisto — the extra-dimensional villain everyone thought would show up at the end of the season. (Instead, it was Agatha All Along.) In the comics, Wanda and the demon become linked after she used his soul to create her children, Billy and Tommy. Mephisto ultimately reanimated himself and reabsorbed Wanda’s children, wiping them from existence and forcing Wanda to work with Agatha Harkness to help ease the pain of her loss.

At this point, viewers still don’t actually know who Mephisto is, but it’s natural for fans to think he could figure into Loki, given his comic origins. In keeping with satanic allusion, Mephisto looks like the traditional concept of the devil — however, he’s been known to change his appearance at will. It’s unclear if his resemblance to Satan himself is his true form or just a trick. Either way, the presence of a massive red demon in the church doesn’t seem accidental.

All that said, Loki director Kate Herron insists the portrait’s connection to Mephisto is purely a coincidence. She told ET Online:

“It's honestly just a super weird coincidence. Like, it's genuinely a reference to Loki — the horns, he was cast out of heaven, that's what it's a reference to. Because we filmed that a long time before — I think WandaVision must have been in post when we filmed that. I did see all the stuff about that online and I was like, ‘Oh, this is going to be interesting.’ But no, it's more relevant to the themes of our show and it's not a nod to that character.”

Loki has always been his own biggest fan, obsessed with monumentalizing himself, so a variant of Loki memorializing himself on a church window does check out.

Of course, Marvel has straight-up lied about their properties before, so the Mephisto theory is still on the table, if only marginally at best. However, one thing’s for sure: The stained glass depicts the devil with a blue tongue, meaning he could have something to do with the blue teeth of the French child, which begs the question…

What Is Kablooie & Where Did It Come From?

Unlike Mephisto, the modern-looking Kablooie candy doesn’t have decades of lore. Hints aren’t found in the comics but instead on the box. The face on the carton kinda-sorta looks like a Frost Giant, which, as explained in 2011’s Thor, is Loki’s actual race of origin, not Asgardian. Loki’s patronage is directly addressed in the first episode as he’s referred to as “Mr. Laufeyson” instead of “Odinson.” It’s within reason that the candy was delivered by another Loki variant, one who embraced his Frost Giant origins. In fact, the blue hue of the French child’s mouth is certainly similar to the teeth of Frost Giants, further incriminating some version of Loki in this whole mess.

If the Frost Giant theory is true, it certainly implicates Loki as the mastermind behind the cathedral massacre. Add that to Herron’s explanation, and you have a resentful, shapeshifting figure who has a flair for theatrics, wears horns, and has a penchant for stabbing people.

Kablooie could also introduce the next Marvel villain, but maybe not the Kang The Conqueror and Ravonna Renslayer storyline you’re thinking of. Leave it to Marvel to have us parsing over playful banter, but Loki referring to the TVA as a “nightmare” may not be so innocuous. “Nightmare” is the name of a Marvel villain who, in the comic books, resides in a pocket of the universe known as the “Dream Dimension,” where he rules as a Fear Lord. His white, ghoulish face is similar to the one on the carton of candy, and the character is rumored to be the villain in the upcoming Doctor Strange sequel, Doctor Strange in the Multiverse of Madness. As far as the comics go, Loki has history wherein he fought and defeated Nightmare, setting a precedent for a possible on-screen adaptation. If that’s not enough for you, Loki head writer Michael Waldron also wrote the script for Doctor Strange in the Multiverse of Madness, which, in addition to being linked to Wandavision, will also have direct ties to Loki.

As fun as it is to theorize about heretofore unseen devils and villains, it’s more likely the guy who the show is named after — or at least some version of him.

More like this
The 'Andor' Timeline, Explained
By Gretchen Smail
Nicola Coughlan Shared A Lady Whistledown Excerpt From ‘Bridgerton’ Season 3
By Grace Wehniainen, Alyssa Lapid and Sam Ramsden
Alicent's Green Dress In 'House Of The Dragon' May Be An Act Of War
By Kadin Burnett
The 50 Most Powerful Characters In The Marvel Universe, Ranked
By Johnny Brayson and Nola Pfau
Get Even More From Bustle — Sign Up For The Newsletter