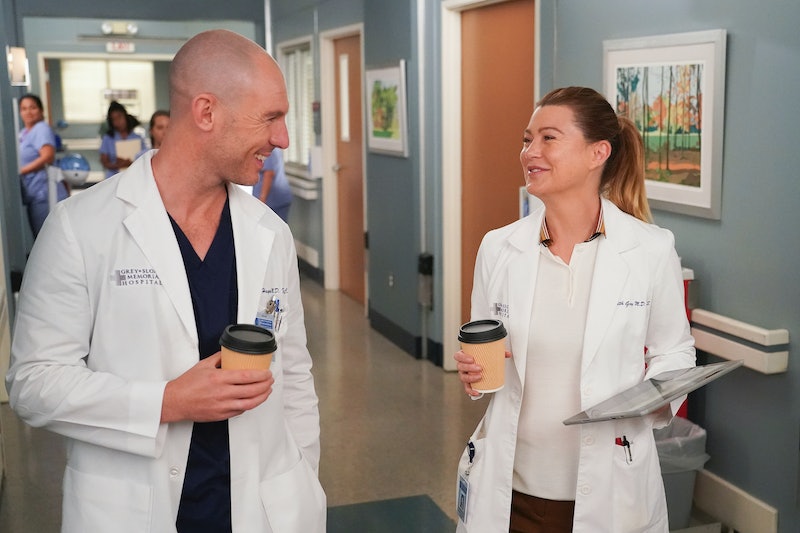 If Season 17 of Grey’s Anatomy taught us anything, it’s that the series still has plenty of surprises to dish out — and now that Season 18 is finally upon us, expect even more chaos to come. Addison’s return promises to shake things up (just like her debut did 16 years ago), and you can count on lots of emotional moments between Meredith and her mom, Ellis, from beyond — and, knowing Grey’s, maybe some secrets from the past, too. Plus, the show will be entering “a post-COVID world,” Camilla Luddington confirmed to Access on Sept. 27, meaning “a little bit more of a sexy season.”

Adding to the high stakes of Season 18? The fact that it could potentially be the show’s last. The fate of Grey’s Anatomy has recently felt pretty precarious — not for lack of viewers, of course, but because series star Ellen Pompeo has “been trying to get away for years,” as she recently revealed in her joking-but-not-joking way on the Emmys red carpet. “[ABC] have been very, very good to me, and have incentivized me to stay,” she told Entertainment Tonight on Sept. 19. “Miraculously, we keep coming up with ways to have a reason to stay, and so if there’s a reason, that warrants it.” Here’s hoping those reasons keep coming, please.

Fortunately, in the meantime, we have an entire new season to stave off the inevitable Grey’s void a little longer. Here are some of the most interesting Grey’s Anatomy Season 18 theories to keep in mind now that the show is making its long-awaited return.

Following Maggie and Winston’s beautiful beach wedding, could a new baby be in the couple’s future? TikTok user ryanfry5 thinks it would be a perfect next step, especially since Kelly McCreary recently confirmed her IRL pregnancy. “Now that we know she’s pregnant in real life,” suggested ryanfry5, “why wouldn’t they make her pregnant on the show? Like, it’s a really good opportunity.” Plus, Maggie and Winston did seem to enjoy looking after Meredith’s kids, so now that her sister is OK, it certainly seems plausible that Maggie might consider expanding her own family.

Meredith And Hayes Will Get Together

While many fans would prefer Meredith and Hayes (aka McWidow) stay friends, others are hoping the pair finally get together in Season 18. “I just want to see her in a committed relationship with a guy who loves kids, doesn’t have a kidnapped fiancée who comes back all out of a sudden, and who needs a girlfriend, not a mother, and who has a personality beyond being attracted to her,” wrote Reddit user Antoninette_Marie in May.

User smitlaz agreed that the doctors should be “endgame,” due in part to their respective experiences with loss: “They can be together, whilst being respectful of the fact that they are not each other’s ‘love of their life.’ There would be no jealousy or judgement between them with regards to their ex-partners, and I think Meredith needs that.” More recently, Twitter user greysanatommy4L theorized that Meredith would consult Amelia for advice about Hayes, based on an upcoming episode synopsis.

It’s not that far off a guess — not only was Hayes there for Meredith during her COVID beach crisis, but Executive Producer Meg Marinis teased the possibility of romance for Meredith, even if it’s not necessarily a priority right now. “She did just lose DeLuca,” Marinis reminded viewers via TVLine. “I don’t think she’s actively looking for [romance]. ... Now, does that mean it won’t possibly find her?”

The OB Squad Will Take Shape With *Another* Surprise Return

Jo and Addison’s connection seemed fated from the day Kate Walsh’s return was announced. After all, who better to mentor the OB newbie than the pro herself? However, several Twitter users are also theorizing (or hoping) that Arizona Robbins might make a surprise return, too. User KEPNERSWILSON laid out the dream scenario of Carina, Addison, and Arizona mentoring Jo — “I NEED THIS TO HAPPEN AND I NEED IT NOW,” the user wrote. User Captshawed wrote that they want to see Addison and Arizona “in one frame again ... is that too much to ask.”

No, not really, because Luddington herself wants to see it, too — and she revealed that she was recently talking to Jessica Capshaw. “I would love to see Arizona come back,” Luddington told Entertainment Tonight on Sept. 27, fanning the fan-theory flames. “I just adore her. I think the character is amazing, I think Jessica is amazing. I would love for her to come back and work with Jo now that Jo’s OB.”

Riggs Will Be Back

With Teddy and Owen getting married and Abigail Spencer’s confirmed return as Megan Hunt, it seems only natural that Meredith’s former flame Nathan Riggs would show up, too. Even though he wasn’t in the promos for this season, Redditor tinnedcranberrysauce noted that his appearance would be a very Grey’s surprise, “kind of like how we knew about Lexie, but Mark was the big shocker” back in that McSteamy April 1 beach episode.

Izzie’s Daughter Could Be A Surgeon

Redditor emmysjj thinks now would be the perfect time for Izzie’s daughter, Hannah (whom she had as a teenager), to come back to Grey Sloan — this time, as a doctor herself. “She’d be about 25 now, so the timeline matches up,” emmysjj wrote. “I think it would be a good way to bring back the spirit of Izzie. ... She could be an intern, and maybe she could follow in Izzie’s footsteps and become a surgical oncologist (since she has leukemia).”

Alex And Izzie Aren’t Actually Together

A darker spin on a potential Izzie tie-in? That she hasn’t actually been with Alex this whole time at all. Twitter user dreamymerder broke down the disturbing scenario, suggesting that Izzie could come visit the hospital, and Meredith would ask about Alex — only for Izzie to respond, “I haven’t seen him since 2010.” Per dreamymerder’s theory, Alex would have left Jo and Grey Sloan after being diagnosed with schizophrenia, of which his family had a history.

Like hospital disasters, character deaths, and trysts in on-call rooms, surprise family members are a staple on Grey’s. Redditor Miserable_Link4556 posits that yet another could be on the way in the form of Peter Gallagher’s David Hamilton — as Meredith’s real father. “Think about it ... that could also explain why Thatcher didn’t fight for Meredith,” the user wrote, “and didn’t walk through the door she opened when she gave him a liver.” Deadline reported that Hamilton is a doctor “who knew Ellis ... back in the day,” so it’s definitely a possibility.

A Love Square Will Form

What is Grey’s without a little romantic drama? Redditor Oncer93 think there might be a tricky situation on the way — “a love square,” to be specific, involving “Jo, Link, Amelia, and a new character.” Jo and Link have been getting closer, as he helped her become a foster parent for baby Luna. Now that Link’s likely hurting after that sweet beach proposal gone wrong (making the case for why you maybe shouldn’t propose at friends’ weddings...), a love square does seem slightly more plausible than before. For what it’s worth, though, Luddington opts to see the pair as adorably platonic, tweeting in June that she “reallllllyyyyy” loves their friendship.

Of course, whether or not Jo and Link will link up (or, like Oncer93 suggests, enter into complicated romantic geometry) remains one of the big questions going into Season 18.