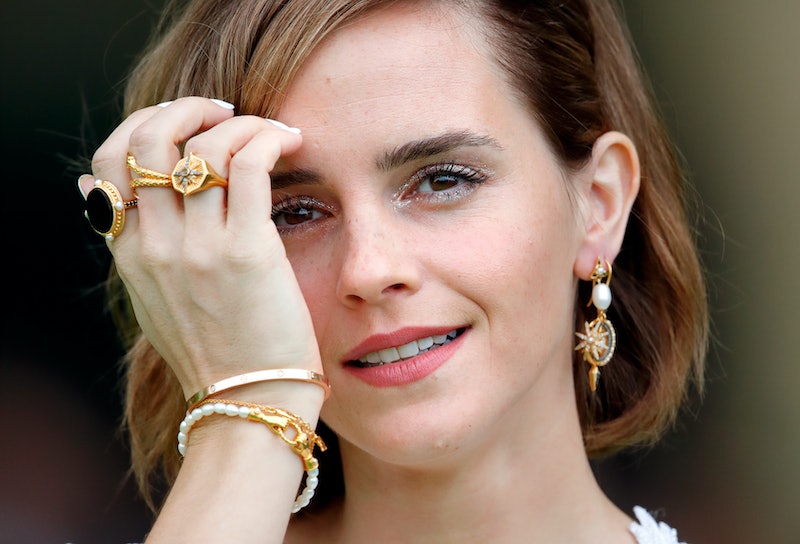 If you’re a Potterhead fan, there’s a good chance you spent some of New Year’s weekend watching Harry Potter 20th Anniversary: Return to Hogwarts on HBO Max. The highly anticipated reunion special provided even more than Harry Potter fans could have hoped for — from reveals about childhood crushes, to cast changes, to the way two-thirds of the Golden Trio almost didn’t stick around for the whole series.

In honor of the franchise’s big anniversary, the Harry Potter reunion also reflected on the casting process ahead of the first film, Harry Potter and the Sorcerer’s Stone. Childhood photos of The Boy Who Lived and his co-stars provided a major dose of nostalgia — but as some observant viewers pointed out, a non-Harry Potter actor’s childhood picture somehow snuck into the special.

Head to HBO Max and skip to the 6:50 mark to see for yourself: As Emma Watson shares a sweet anecdote about reading Harry Potter with her family as a child, a photo of a young girl in Minnie Mouse ears is shown. But it’s not actually Watson. It’s another Hollywood Emma — Emma Roberts, to be exact. Twitter user vee_delmonico99 alerted fans to the mix-up on Jan. 1. “GUYS HELP ME THATS LITERALLY EMMA ROBERTS NOT EMMA WATSON,” they wrote. Oops!

Indeed, if you scroll way back on the Scream Queens star’s Instagram feed, you’ll find the photo, which she originally posted in 2012 with the caption, “Minnie mouse ears!”

Emma Watson’s Reaction To The Mix-Up

Watson playfully reacted to the mix-up on Jan. 5 by re-posting Roberts’ photo, with the caption, “I was NOT this cute, @emmaroberts 😂#emmasistersforever”

Producers’ Statement About The Mix-Up

In a statement to EW, Return to Hogwarts producers said, “Well spotted Harry Potter fans! You brought an editing mistake of a mislabeled photograph to our attention. New version up shortly.”

The Emma error wasn’t the only suspected editing moment that had fans talking. As TikTok user just_p_theb pointed out, it looks like twins James and Oliver Phelps are miscredited as each other upon their first introduction in the special. “Pls tell me it’s made on purpose,” the user wrote, acknowledging the possibility that the name mix-up was a nod to Fred and George’s penchant for pranks, including pretending to be one another.

More like this
Hilary Duff Is “Optimistic” About A 'Lizzie McGuire' Reboot
By Alyssa Lapid
Ashton Kutcher Wants Danny Masterson “To Be Found Innocent” In Rape Retrial
By Jake Viswanath
At 28, Debra Jo Rupp Was Living A Much Different '70s Show
By Grace Wehniainen
Rupert Grint Just Shared A *Major* Update About Ron Weasley’s Future
By El Hunt
Get Even More From Bustle — Sign Up For The Newsletter
From hair trends to relationship advice, our daily newsletter has everything you need to sound like a person who’s on TikTok, even if you aren’t.

This article was originally published on Jan. 2, 2022