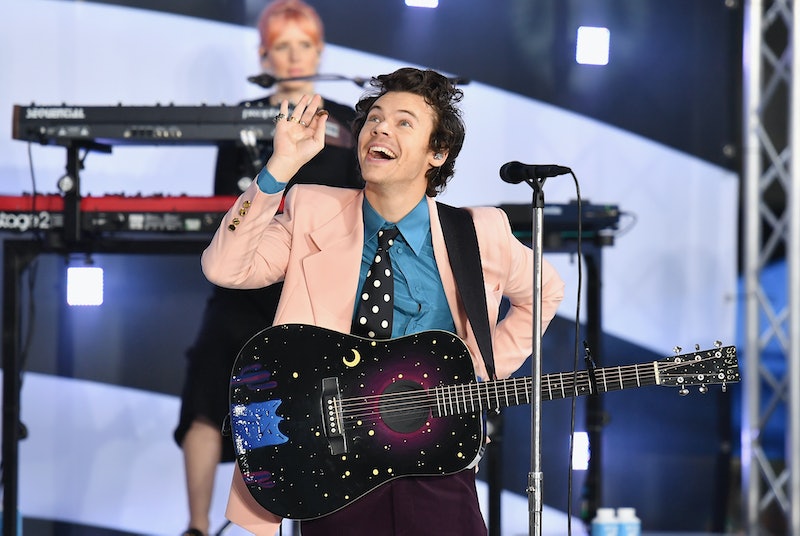 Harry Styles has been reconnecting with fans through his ongoing Love On Tour, which launched on Sept. 4, following over a year's worth of delays. Spanning arenas across North America, it's his first concert tour since 2018, and the musician hasn't missed an opportunity to provide his audience with the artist-fan connection they've craved throughout lockdown. Last week, Styles paused his set in Chicago, Illinois, to help a fan propose to their longtime significant other before performing the ultra-romantic "Canyon Moon." During his Sept. 29 show in Nashville, Tennessee, the former One Direction member excitedly assisted a fan in revealing the sex of their baby to come.

According to photos posted on Twitter, two fans brought signs to the concert that included references to his 2018 track "Kiwi," which features the lyric: "I'm having your baby / It's none of your business." One sign read, "I'm having a baby. Please make it your business...," while the other stated, "...And open these gender results" alongside a folded sheet of paper that presumably featured the baby's sex. Per a video shared to Twitter, it appears Styles called the fan's husband while onstage so they’d be present for the big reveal.

"Are you still there, mate?" he said into a phone before requesting a countdown from the audience. Then, Styles broke the news: "A little baby girl." As the crowd erupted in applause and the expecting fan burst into tears, the singer dropped to his knees, hands in the air, and pretended to cry along with them. "That's what I wanted. Is that what you wanted?" he joked before handing the paper back to the fan and congratulating their spouse on the phone. He then lowered his microphone to his side and proceeded to privately converse with the fan's spouse before returning their phone.

As for Styles' own relationship with actor and filmmaker Olivia Wilde, it appears to be going strong. She attended the inaugural Love On Tour show in Las Vegas on Sept. 4, and per E! News, the Booksmart director "was so happy and dancing all night" and "singing along to every song." The couple is currently preparing for the release of Don't Worry Darling, a forthcoming psychological thriller directed by Wilde and starring Styles alongside Florence Pugh.

While there's no sign of an engagement or pregnancy in the cards for them anytime soon, Styles told Another Man magazine in 2017 that he sees himself getting "married and having kids" in the future. "Well, I think so. Probably," he continued. "I can't wait for a time when that's a thing for me; I look forward to that in my life... For now, I feel like you enjoy experiences more when you go with people you really want to be with and really care about. I'm enjoying working right now, and if you're enjoying working, you should make the most of it."

More like this
The Beyhive Is Mad At Harry Styles After Beyoncé’s Album Of The Year Snub
By Jake Viswanath
Ariana Grande & Kristin Chenoweth Sing A Wizard Of Oz Classic On TikTok
By Alyssa Lapid
Olivia Rodrigo Manifested Finally Meeting Demi Lovato
By Jake Viswanath
Taylor Lautner Thought Taylor Swift's 2009 VMAs Interruption Was A "Skit"
By Alyssa Lapid
Get Even More From Bustle — Sign Up For The Newsletter
From hair trends to relationship advice, our daily newsletter has everything you need to sound like a person who’s on TikTok, even if you aren’t.