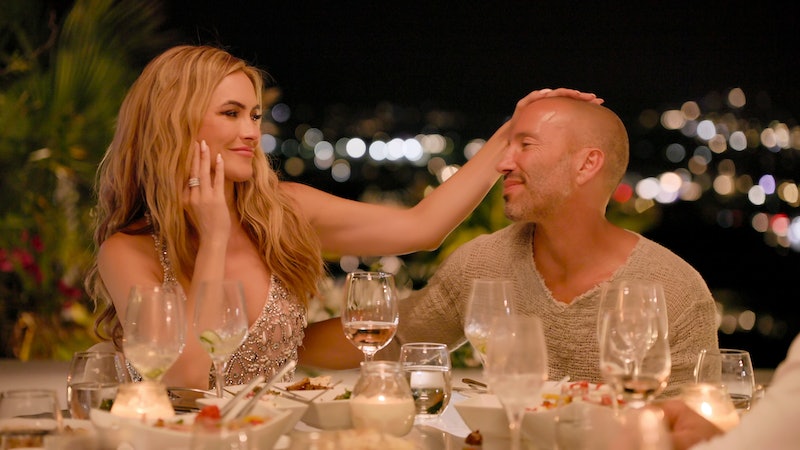 There were several buzz-worthy moments in Selling Sunset’s Season 5, which premiered on Netflix on April 22: The arrival of a new agent and potential troublemaker Chelsea Lazkani, Chrishell Stause and Jason Oppenheim’s relationship and breakup, and Emma Hernan’s claims that Ben Affleck asked her out for coffee on the dating app Raya. But one innocuous moment went viral online and it was when Jason supposedly made a “fake” phone call in one episode of Netflix’s hit show. On May 2, Jason debunked the rumors that he staged a faux call.

The phone call in question happened after Chelsea announced that she bagged a buyer for one of the brokerage’s properties. Jason promised her a spot on the team if she could close a deal, and she delivered with a difficult offer to beat. Jason immediately stepped out to call his client with the offer. After the client accepted, Chelsea was officially welcomed to the team. But because nothing escapes eagle-eyed Selling Sunset fans, many noticed that while Jason was on the phone, the camera app was open, leaving fans convinced that the phone call was staged.

Jason cleared the rumors about that viral moment in TMZ video posted on May 2. After a reporter asked him why he staged the call, he replied, “It wasn’t a fake phone call.” While he’s well aware of the trending moment, he maintained it was a legit business call. Inviting him to participate in a “quick investigation,” TMZ challenged him to call someone to see if it was possible to have the camera open during a call. “I’m sure it works because it was a phone call,” he reiterated.

Proving that it works, Jason called his assistant, opened the camera app, and let TMZ hear the ringing. “It’s not that complicated. Of course, I know it was a real call. So I know this works,” he told the outlet. After TMZ further surmised how the camera app could’ve been opened (i.e. if his ear hit the app), he just said, “I have no idea. All I know is I was talking to the client.”

This isn’t the first time Jason’s phone use has been poked fun at, especially this season. The O Group agents pointed out in Season 5 that they’ve never seen Jason actually text. He likes to use the voice dictate.

Whether or not this incident will be brought up in the Selling Sunset Season 5 reunion on May 6 is unclear. But it likely wouldn’t be the burning question that would make Jason squirm. Speaking to Entertainment Tonight on April 24, the broker revealed he was “apprehensive” about the reunion special and potentially talking about his breakup with Chrishell. “That’s a difficult thing that I’m still working through,” he told the outlet, adding that he was still “processing” their breakup and that it’s “still a little rough.”

More like this
Christine Quinn Says She & This Co-Star Got Paid The Most For 'Selling Sunset'
By Grace Wehniainen
When Was 'Bling Empire' Season 2 Filmed?
By Alyssa Lapid
Everything We Know About Chèrie & Jessey’s Abrupt Exit From Bling Empire
By Alyssa Lapid
The Richest 'Bling Empire' Cast Member Is...
By Hugh McIntyre
Get Even More From Bustle — Sign Up For The Newsletter