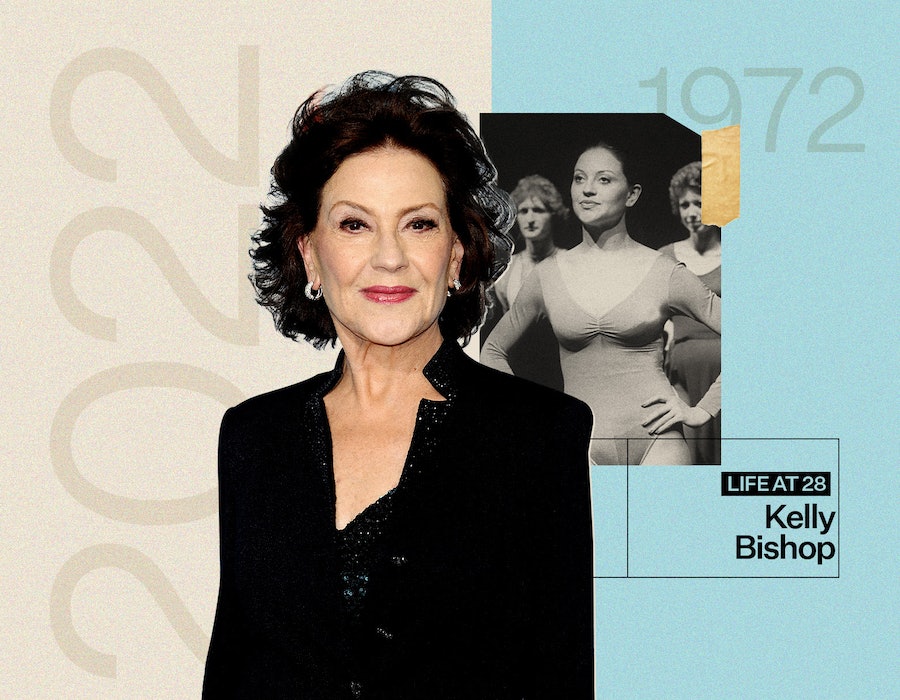 At 28, elitist Gilmore Girls matriarch Emily Gilmore had already married Richard and was well on her way to conquering Connecticut high society. But life at 28 for Kelly Bishop, the actor who played her, was a lot less simple. Not only was she wearing sexy ensembles that would have made Emily clutch her pearls, but she was plotting to leave her then-husband.

After buckling under societal pressures to marry before 30, Bishop quickly realized she’d made a mistake. “I really, truly wasn’t in love with him, and he was only in love with my bank account,” the 78-year-old tells Bustle of the three-year partnership.

But despite the marital strife, Bishop recalls having a “fabulous” time living and working in New York. “I was doing the best kind of job you could do: I was dancing on Broadway.” After moving to the city at 18, the Colorado native — who was then going by her given name Carole Bishop — landed roles in productions of On The Town, Golden Rainbow, and Promises, Promises. Her life revolved around dance: she’d perform eight times a week and party until 3 a.m. But as she neared 30, Bishop was acutely aware that her best dancing years were numbered, so she set her sights on acting.

It wasn’t until three years later at age 31 that Bishop would land her first principal role as Sheila in A Chorus Line; after the 1976 Tony Awards, Bishop would head home to her Upper West Side apartment with a trophy and a newly debuted stage name: Kelly.

The change may have been for bureaucratic reasons — there was another Carole Bishop in the industry — but it was eerily prophetic. “There’s a group of us that hung around together, and we’d make up different [characters],” Bishop remembers. Kelly was one of hers, whom she imagined as “a snotty little rich girl.” More than two decades later, she’d make an indelible mark on Hollywood for playing the grown-up version of just that.

Below, Bishop talks about reuniting with Amy Sherman-Palladino on the set of The Marvelous Mrs. Maisel, how Broadway star Elaine Stritch gave her the courage to sing, and which of Rory Gilmore’s boyfriends she would have dated.

Did you have a signature look?

We were moving into the disco years, so if you went out, you were wearing hot pants. Do you even know what those are?

They would be satin or something totally fabulous. And by then, we were wearing the little white Courrèges boots and very often exposed midriffs. I was a dancer, and I was 28, so you could get away with all that ’cause your body looked great.

And lots of hair and eyelashes. What we were really into then was faux. It would cost some money, but even if your hair was long, you pull your hair up into a ponytail and this faux would be 10 inches long of fabulous human hair. We were having a good time.

Was your living situation equally fabulous?

Well, not so much. I got married a couple years before. Because of the generation I am and the norms of what was right and what was wrong, I decided to get married. I was dating a guy – actually, we were kind of living together – and I thought I had to get married before I’m 30 because if you [weren’t], you were an old maid. Now, that’s ludicrous to think about considering I was a professional dancer on Broadway. It’s not like I was an old maid. But it’s the mores of what I was raised with. So I thought, “Well, now I gotta find a husband [and] I might as well marry the guy that I’m seeing.”

So I was in the midst of realizing I made a dreadful mistake. So as far as my life went, it wasn’t so good. As I tell women who are knocking on 40 and say, “I’ve never been married yet,” I say, “That’s OK. You just skipped the lousy first marriage anyway.”

What were you most proud of accomplishing at 28?

The idea of being a dancer on Broadway in a hit show was really good. It was really cool. Still is. That was it, just being a professional dancer. Made me proud.

You had already been in multiple shows then. Did you think transitioning to acting was within reach at 28?

That part didn’t occur to me. I was wanting to transition out of the chorus [but] my problem was I wasn’t a singer. I didn’t have a good vocal technique, and I knew it. And if you’re gonna be a principal in a musical, you’re gonna have a song.

The magical moment happened when I saw this production of Company at the Actors Fund Benefit, and there’s Elaine Stritch. I remember she came stage right, walked straight downstage toward the audience, and [sang] “The Ladies Who Lunch.” Boy, it was a showstopper. It was a big number – she won a Tony for that. But Elaine Stritch was not a beautiful singer by any stretch of the imagination. And I looked at her, and I went, “I can do that! I can do that!” That was my moment.

[Later], when I was doing A Chorus Line, all the important people were coming to see us backstage. And I remember the night that Elaine Stritch came over and we started talking. I didn’t put it that way because I didn’t want to insult her voice, but I told her about seeing her in that role and that’s what gave me the courage to get out of the chorus.

Your Chorus Line song “At the Ballet” was based on your audition for the part! How did it feel back then to perform a mini-memoir?

When I read the script, I [went], “That’s exactly what I said. This is just the transcript. This is me!” I realized that my story was completely Sheila’s story and actually verbatim quotes. So I was very flattered because I didn’t think I was that interesting.

I did have to say to my mother when she came to see the show, “When you see my character, you’re going to recognize a lot. I just want you to know that this is theatricalized.” She was just thrilled. Of course, she [was] terribly proud of me.

In an interview, you mentioned your relationship with your mom was more like Lorelai and Rory’s on Gilmore Girls.

Absolutely. She would talk to me like a regular girlfriend her age, and I sometimes look back and think, “My goodness, I learned a lot of things I was probably too young to learn.” But I seemed to be sophisticated enough to handle them. She was just straight out with me, and that’s one of the great things about her.

And that’s why even in [the lyrics of] “At The Ballet” – “When I was a little girl and I said to my mother, ‘Will I be pretty when I grow up?’” That happened to me. And she looked at me and said, “No. You’ll be very attractive. You’ll be different, and you’ll have a lot of flair.” And I was sitting there [thinking], “But I [want] to be pretty!” That’s the perfect example of my mother. I asked a question, I got an answer.

But her relationship with her mother was like Lorelai’s and Emily’s. My poor mother could not do anything right the entire time I was growing up. That was so sad. It really bothered me. So when we got to Gilmore Girls, I understood those characters completely.

Mrs. Maisel is like a Gilmore Girls reunion. Were you able to reunite with any old castmates on the set?

No. Only ’cause I only did a couple of episodes. The only people these days from Gilmore Girls I socialize with on any sort of regular basis [are creator] Amy [Sherman-Palladino] and Lauren Graham. I’m still close with her, but that’s pretty much it. I’m very friendly with Yanic Truesdale, and I was very friendly with Ed Herrmann, but the only people I see socially [are] Lauren and Amy.

Probably Dean. ’Cause he was cute! Big, tall, cute guy! And he was nice. They were all good, and they all made sense, [but] it definitely would’ve been Dean.

He’s a sincere, gentle guy. He’s professional, kind, and he’s not a diva. He’s just a good guy. I think they nailed him when they cast him.

I did! I’m gonna do a little self-analysis here. What it boiled down to [was] I wanted control of my own life. Even though I had a wonderful mother – my father was something else altogether and the family life was so contentious – I felt not being a child would give me my freedom to make my own decisions.

Somehow being 30 meant no one could treat me like a child anymore. Especially my generation – it still happens, I know – but when men meet a young woman, they refer to [them] as “dear.” “Yes, dear. Yes, sweetheart.” And I always found that so insulting. I thought, when I get to be 30, no one’s gonna call me “dear” without me saying something back to them. So that’s what being 30 was all about; it was a representation of being an autonomous adult.

What about looking young? Did that preoccupy you at all when you were pushing 30?

No, no, no, no. I’ve always resented or [envied] the fact that in Europe, women actors can get older, look older, and they’re still revered and still work. Turning 30, that didn’t bother me because I never wanted anybody to think I was younger than I was anyway.

Why lie about my age? Say I’m younger and have everybody say, “God, she looks terrible for her 20s”? If you’re gonna lie about your age, say you’re 10 years older and everybody will think you look fabulous.

Go ahead and leave [your] husband right away. ASAP. Before your entire savings is wiped out.

More like this
Jennifer Lopez Found The Perfect Ben Affleck Throwback Video For Mother’s Day
By Stephanie Topacio Long
At 28, Minnie Driver’s Personal Life Was “Falling Apart”
By Kate Dwyer
Jesse Williams Is “Not Down” Despite Leaked Images Of His Broadway Nude Scene
By Brad Witter
Penn Badgley & Leighton Meester Met On A Horror Movie Set Before 'Gossip Girl'
By Jake Viswanath
Get Even More From Bustle — Sign Up For The Newsletter