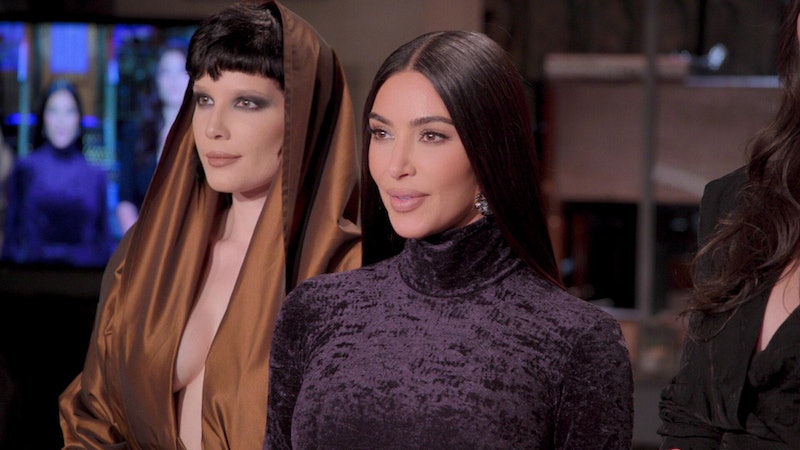 Kim Kardashian delivered a seemingly no-holds-barred monologue at the top of her debut Saturday Night Live hosting gig in October, but the billionaire and aspiring lawyer insists it could’ve been even more ruthless. In a cover story interview with i-D magazine published on Dec. 14, Kardashian revealed she cut a joke from her monologue about her sister Khloé Kardashian and NBA player Tristian Thompson’s rocky relationship.

While she stopped short of revealing the joke in December, viewers of The Kardashians heard the savage joke during the April 21 episode of the new Hulu series while Kim K was rehearsing an early version of her monologue with friend and comedian Amy Schumer. “Oh Khloé, you have the biggest heart,” she said. “It’s so big, it has room for Tristan and all of his side pieces.” Even Schumer, who’s known for her provocative punchlines, was stunned. “Oh sh*t,” she responded.

The punchline was an obvious nod to Thompson’s multiple alleged cheating scandals, which reportedly lead to his split from Khloé in June 2021. In December, Maralee Nichols birthed a baby boy allegedly fathered by Thompson, whom she claims asked her to get an abortion and tried to bribe her into silence. While Thompson denied the allegations, DNA test results confirmed that he was indeed the father of Nichols’ son in January. He apologized to Khloé and took “full responsibility” for his actions in an Instagram statement. “You don’t deserve the heartache and humiliation I have caused you,” he wrote. “You don’t deserve the way I have treated you over the years. My actions certainly have not lined up with the way I view you.”

Jokes that did make it into Kardashian’s monologue were about divorcing Kanye West, having more followers than SNL does weekly viewers, and her father’s involvement in O.J. Simpson’s murder trial, among other scathing topics.

Speaking to actor and playwright Jeremy O. Harris for i-D, the Skims entrepreneur detailed her family’s openness toward jokes about them on SNL. “Everyone in the family was just like, ‘You can do whatever you want.’ Everyone was really easy and game for me to do whatever I wanted,” she told i-D. “Although I had a really funny joke about Tristan and Khloé that I took out — I could’ve maybe gone further. But everyone was like, ‘Use me. Do whatever you want. This is your time.’ They were down. That was super cool.”

Elsewhere in Kim’s i-D interview, she spoke about how she felt to be asked to host SNL, a feat she wasn’t clamoring to achieve. “I really hadn’t been manifesting it,” she explained. “I had been asked in the past, and I was like, ‘Oh my God, I can’t do it. I can’t do it. I don’t have it in me.’ This time felt like the right time. And once I commit, I commit.”

Despite not feeling particularly drawn to the gig, Kardashian wasn’t intimidated by the work or intense schedule. “I actually wasn’t nervous at all. I had such a good time,” she continued. “I was amazed by the amount of work they do on that show. It’s crazy. One day we worked 23 hours, it was insane, and literally, you don’t even get a lunch break. You eat as you go.”

This article was originally published on Dec. 14, 2021