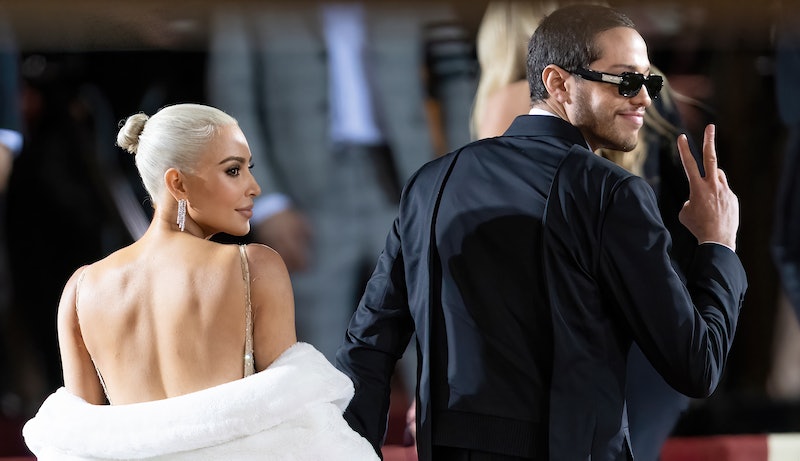 Pete Davidson was the lucky star who was chosen to go to space on Jeff Bezos’ 20th Blue Origin flight, and he had a very Pete Davidson reason for accepting the offer in March. On the Oct. 13 episode of The Kardashians Season 2, the comedian gabbed about his planned space travel in a phone call with his then-girlfriend Kim Kardashian and her family, revealing why he was looking forward to blasting off.

“To be completely honest, I can’t wait to get the f*ck away from everybody,” Davidson said. Kim echoed her mom Kris Jenner’s question, “Are you gonna come back?” He warned her that she may end up on Earth alone. “I think I’m gonna stay up there, babe,” he said. The Saturday Night Live alum told Kris that he had no fears about going to space, quipping that “my personal life is scarier.” However, on her advice, he said that he was making a will in case things went awry.

When Kim’s sister Kendall Jenner asked how Davidson’s preparation for space was going, Kim told her that it wasn’t going to happen due to scheduling conflicts with one of the actor’s projects on the new lift-off date. “I’m sure there’s nothing Pete would love more than to get off of this planet right now, and would love to go to space to get away from everyone,” she said in a confessional. In a previous episode of The Kardashians, Kim expressed concerns about Davidson going to space, which were assuaged by Bezos. “I understand the greater goal for our planet, but I always was like, ‘Can it blow up?’” she said. “After talking to Bezos about it, and hearing how safe it is... I felt comfortable with him going. I was like, ‘If I didn’t have four kids, I would absolutely go.’”

If Davidson decides to take up Bezos’ offer again in the future, he won’t have to run it by Kim first. The pair reportedly broke up in August 2022 after ten months of dating, and while neither of them have yet to comment on the reason for their split, it certainly wasn’t due to discord with the family. Kris praised him in a confessional, expressing how good he was to her daughter. “No drama, no stress, he’s just Pete, fits in with the family,” she said. “I think Kim is happy. She laughs, she’s more confident. Pete brings out the best in her.”