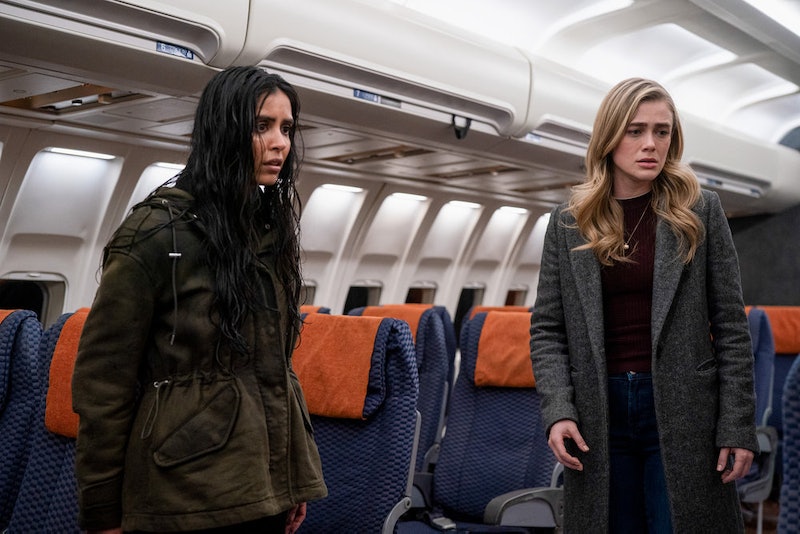 When NBC abruptly canceled supernatural plane drama Manifest after just three seasons, viewers were left with burning questions about the fate of Montego Air Flight 828 and its 191 passengers. How did turbulence cause a five-year time freeze? What are “callings,” and who are they really from? And where exactly did Montego Air Flight 828 disappear to for half a decade? All questions fans fervently demanded answers for.

The June 2021 cancellation — which came despite NBC’s six-season deal with creator Jeff Rake — prompted fans (aka Manifesters) to create a petition for the show’s renewal. More than 95,000 fans affixed their signatures to the Change.org petition to #SaveManifest and many also took to social media to contest the cancellation. That’s where Netflix stepped in to resuscitate yet another series.

On Aug. 28, 2021 (8/28, just like the plane, of course), Netflix announced it had renewed the show for a fourth and final season. Though it’s rare for a canceled show to get picked up again, Netflix is known for giving shows a second life thanks to its famed “Netflix Bump.” When Manifest dropped on the streaming platform, it peaked as the top-watched media for the service for weeks. The show even amassed 2.5 billion viewing minutes the week it was canceled by NBC, so the renewal didn’t necessarily come as a surprise. (A series that shares a similar fan-enabled revival is Lucifer, which Netflix picked up after fans trended #SaveLucifer and #PickUpLucifer on Twitter.)

With the plane drama returning for a final season, here’s everything to know about Manifest Season 4, including what loose ends the series will have to resolve.

While Manifest abruptly ended on cliffhangers, its creator now has a chance to tie up some loose ends. Rake told Entertainment Weekly in June 2021, “There is a huge appetite for people wanting to know what’s that end of the story, what happened to the passengers, what ultimately happened to that airplane.” He’ll have 20 episodes to feed that appetite.

Rake thanked the fans in a statement after the renewal, saying in part, “That we will be able to reward the fans with the ending they deserve moves me to no end. On behalf of the cast, the crew, the writers, directors, and producers, thank you to Netflix, to Warner Bros., and of course to the fans. You did this.” Even Netflix Head of Global TV Bela Bajaria aims to give fans “some closure” with this “final supersized season,” saying in a statement, “Jeff Rake and his team have crafted a beguiling mystery that has viewers around the world on the edge of their seats and believing again in second chances.”

Season 4 will unfold over an extended 20-episode, two-part season, despite previous seasons only containing 13 episodes on average. The change will hopefully provide more time to clear up any remaining questions surrounding Season 3’s abrupt cliffhangers on Angelina’s actions, Captain Daly’s brief reappearance, and Cal’s teenage spurt, as well as demystify Flight 828 once and for all.

On Sept. 24, Netflix finally revealed the Manifest Season 4, Part 1 plot synopsis. Set two years after Grace’s brutal murder, the Stone family “is in shambles as a devastated Ben continues to mourn his wife and search for his kidnapped daughter, Eden,” per the streamer. “Consumed by his grief, Ben has stepped down from his role as co-captain of the lifeboat, leaving Michaela to captain it alone, a near impossible feat with the passengers’ every move now being monitored by a government registry. As the Death Date draws closer and the passengers grow desperate for a path to survival, a mysterious passenger arrives with a package for Cal that changes everything they know about Flight 828 and will prove to be the key to unlocking the secret of the Callings in this compelling, mind-bending, and deeply emotional journey.”

Even before there was a definitive list of returning cast members, the series regulars tweeted excitedly about the renewal announcement. They included Melissa Roxburgh and Josh Dallas, who play siblings Michaela and Ben Stone. According to Deadline, both of them had closed deals to return for Season 4 with “sizable pay increases.” Afterward, Parveen Kaur, who plays medical researcher Saanvi Bah, J.R. Ramirez, who plays detective Jared Vasquez, and Matt Long, who plays Zeke Landonis, were all confirmed for a Season 4 comeback.

Season 3 newcomer Holly Taylor, who plays Angelina Meyer, and Luna Blaise and Jack Messina, who play twins Olive and Cal, also took to Twitter to celebrate the news. However, it was later revealed that the twins will be played by older actors, given the time jump, and, following Grace’s Season 3 finale fate, Athena Karkanis, also will not return.

Netflix dropped the Manifest Season 4, Part 1 trailer at Tudum on Sept. 24. “828 wasn’t an accident,” Michaela tells Ben in one clip, adding, “We’re supposed to save the passengers together.” Meanwhile, Saanvi points out that the passengers are now 18 months away from the dreaded Death Date — aka the day when a resurrected person has to face their second death — and Cal visits a familiar shipping yard where he finds the missing black box from Flight 828. “Have we had this wrong the whole time?” Saanvi asks after reviewing the information. After Michaela tells the Flight 828 pilot that they didn’t fly into the storm — it flew into and “chose” them. It’s also revealed that someone is murdering the passengers, a voice says over an aircraft intercom, “We are now beginning our final descent.”

After production began in the fall of 2021, Netflix announced on Sept. 24 that Manifest Season 4, Part 1 will be available to stream on Nov. 4. A Part 2 premiere date still remains forthcoming.

This post will be updated with additional details as more information on Manifest Season 4 becomes available.

More like this
Nicola Coughlan Shared A Lady Whistledown Excerpt From ‘Bridgerton’ Season 3
By Grace Wehniainen, Alyssa Lapid and Sam Ramsden
Netflix Reveals First Look At Wednesday In The 'Addams Family' Spinoff Series
By Bustle Editors
Viserys’ Fate On 'House Of The Dragon' Could Differ From The Book In This Surprising Way
By Grace Wehniainen
A New 'And Just Like That' Table Read Pic Confirms A Key Character's Return
By Jack Irvin and Grace Wehniainen
Get Even More From Bustle — Sign Up For The Newsletter

This article was originally published on Aug. 30, 2021