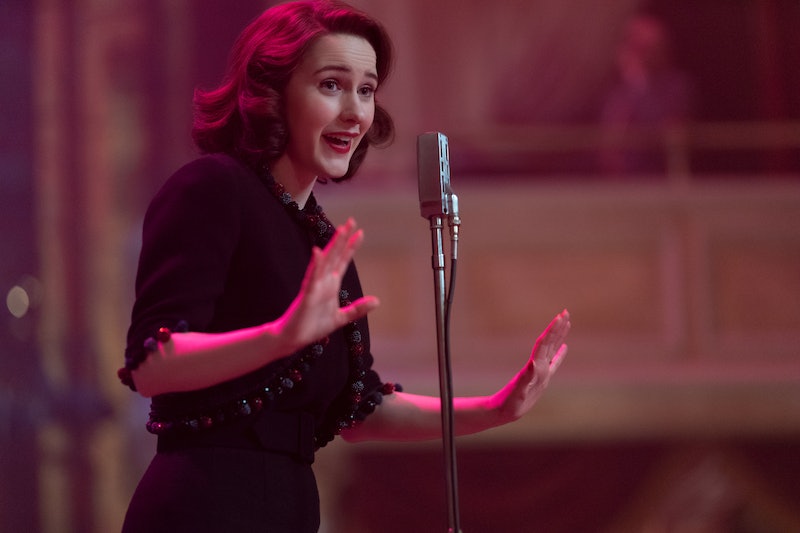 At the start of The Marvelous Mrs. Maisel Season 3, Midge’s (Rachel Brosnahan) stand-up career was taking off. But by the end, she was basically back at square one. She got booted from her gig opening on tour for musician Shy Baldwin after accidentally outing him, leaving her financial situation in a rough place.

“It was time for her to learn about the true driving force in the creative process, which is anger and revenge,” series co-creator Amy Sherman-Palladino explained to Deadline of the abrupt shift. “After thinking that she was doing really great, and on tour with Shy Baldwin and that they were really close friends, and they’re pals. And then she screwed up at the Apollo and got nervous and her mouth said things that her brain should have censored first, but they didn’t. And it got her to trouble. And she feels a little betrayed now.”

In Season 4, premiering on Feb. 18, Midge finds a job that gives her total creative freedom. “You know what’s great about me?” she says in the trailer. “It’s when I’m me. Every single show I’m going to say exactly what’s on my mind.” But in typical Midge fashion, her complete commitment creates a rift between her and her loved ones.

Here’s everything you need to remember from Season 3 before hitting play on the new season.

At the start of Season 3, Midge and Susie (Alex Borstein) hit the road with jazz singer Shy Baldwin (LeRoy McClain), who Midge was opening for on his national tour. Their first gig was at a USO show, which represented a huge milestone for Midge — it was easily the largest crowd she’d ever performed for, and for the first time, her comedy was profitable.

As the tour continued, Midge was forced to hone her craft, adjusting her routine for different cities and crowds. She also grew close to Shy and even developed a good rapport with his strict manager, Reggie (Sterling K. Brown). Their bond deepened when she discovered Shy beaten and bruised, and he opened up to her about being a not out Black gay man.

But during a show at the Apollo Theater in Harlem, Midge unintentionally blew up everything up. Asked to open ahead of Moms Mabley (Wanda Sykes) and nervous about how to appeal to Shy’s community, Midge made one too many jokes alluding to Shy’s sexuality. Afterward, Reggie stopped her and Susie from boarding the plane to continue the tour in Europe. He informed them that Midge’s jokes crossed a line, leaving them stranded on the tarmac.

Abe and Rose lost their home

After Abe (Tony Shalhoub) was let go from his job as a Columbia professor, Rose (Marin Hinkle) went to see her wealthy family. However, she ultimately gave up her trust fund after tiring of their sexist treatment toward her. This left Rose and Abe without a means to support themselves, so they moved out of their fancy Upper West Side apartment and in with Joel’s (Michael Zegen) parents, Moishe (Kevin Pollack) and Shirley (Caroline Aaron). Living with them was grating, but eventually forced Abe and Rose to grow. Abe delved into communism and became a theater critic for The Village Voice, and Rose learned to become more independent.

Joel got a new love interest

Joel pursued his dreams of opening his own nightclub in Chinatown, and realized pretty quickly that the rent was low because there was an illegal gambling ring in the basement. There, he met and began to date Mei Lin (Stephanie Hsu), whose family runs the casino. She helpfully acted as a mediator between him and her parents.

In order to help make ends meet, Susie took comedian Sophie Lennon on as a second client. Sophie was determined to become a serious theater actor, and Susie pulled the strings to make it happen. But on the opening night of Sophie’s play, Sophie froze and reverted to her Sophie from Queens routine. The critics tore her apart, and Susie angrily confronted her outside the theater.

Meanwhile, Susie began to gamble while Midge and Shy were on tour in Vegas, and the problem only deepened throughout the season. After gambling away all of Midge’s tour money, Susie went to Joel to beg him to take over as her financial manager, as she clearly couldn’t be trusted.

Midge’s love life was a mess

Season 3 opened with Midge leaving Joel’s bed after a Season 2 hook-up. They later finalized their divorce, despite the judge not understanding why they were separating if they were so amicable. It seemed like they were finally moving on until Joel decided to fly to Las Vegas to catch Midge’s show. The two got drinks and woke up the next day with hangovers — and the reveal that they’d gotten married again. They agreed to annul it, but we never actually saw that happen.

Meanwhile, Benjamin (Zachary Levi) confronted Midge for suddenly ending their engagement via a “Dear John letter, un-proofed.” (Yikes, Midge.) Her slow burn romance with Lenny Bruce (Luke Kirby) also continued, with the two having a dreamy night of dinner and dancing at a Cuban nightclub. But just when it seemed like they would finally sleep together, Midge opted to return to her motel room alone. “Before I’m dead,” Lenny told her as they parted. One can only hope they find a way back to each other in Season 4.