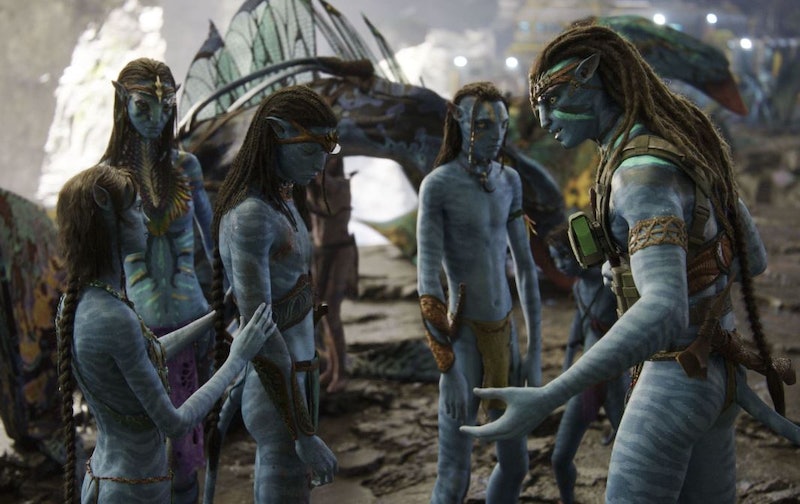 Almost thirteen years later to the day, James Cameron released his long-promised sequel to the smash sci-fi hit Avatar. Avatar: The Way of Water hit theaters on Dec. 16, 2022, and was immediately lauded for its advanced, stylized computer and motion capture graphics.

Taking place more than a decade after the events of the first film, the Avatar sequel follows ex-Marine Jake Sully (Sam Worthington) and his Na’vi family (including wife Neytiri, played by Zoe Saldana) as they battle a new human threat in Pandora. Avatar: The Way of Water has already grossed over $881.4 million worldwide as of Dec. 26, 2022, and is currently the fifth-highest-grossing movie of the year behind Marvel releases like Spider-Man: No Way Home and Doctor Strange in the Multiverse of Madness.

With a holiday release and many carving out three and a half hours in their day to go see the film in theaters (did we mention the runtime is 192 minutes?), fans had a lot to say — both good and bad (but mostly good) — about the latest Hollywood blockbuster.

A lot of people were in awe at the visuals and technical work of the film, marking it as a truly theatrical experience.

Many were delighted by a cameo from Edie Falco, and others were confused about but impressed by Sigourney Weaver’s reimagined role (she played an officer in the first film and her own character’s daughter — a Na’vi teenager adopted by Sully and Neytiri — in the second).

A 2010 quote from Cameron about the Lakota tribe of Native Americans resurfaced during the press tour for the sequel, drawing attention to the potentially racist undertones of the film. Cameron said that Native Americans should have “fought harder” against colonialism. Many called for a boycott of the Avatar franchise or even suggested handing the reins over to an Indigenous filmmaker.

There were many Internet memes that riffed off of the costume design and graphics of the film, comparing them to other pop culture cornerstones like Arrested Development and The Lonely Island.

Some have enjoyed the film so much, they are expecting it to clean up when Oscar nominations come out early next year.

Cameron has announced three more sequels in the series and rumor has it that Cameron turned in a nine-hour cut of the third installment. Despite a potentially even longer running time than The Way of Water, Twitter is still (mostly) hype about seeing more of this world.

More like this
Anne Hathaway Shared A "Thrilling" 'Princess Diaries 3' Update
By Darshita Goyal
The 'Scream 6' Trailer Shows Off Hayden Panettiere's Return & Ghostface In NYC
By Jack Irvin and Jake Viswanath
Twitter Is Overjoyed By Angela Bassett’s Record-Making Oscar Nomination
By Maxine Harrison
Twitter Is Saying The Same Thing About Beyoncé's Renaissance World Tour
By Shahed Ezaydi
Get Even More From Bustle — Sign Up For The Newsletter
From hair trends to relationship advice, our daily newsletter has everything you need to sound like a person who’s on TikTok, even if you aren’t.