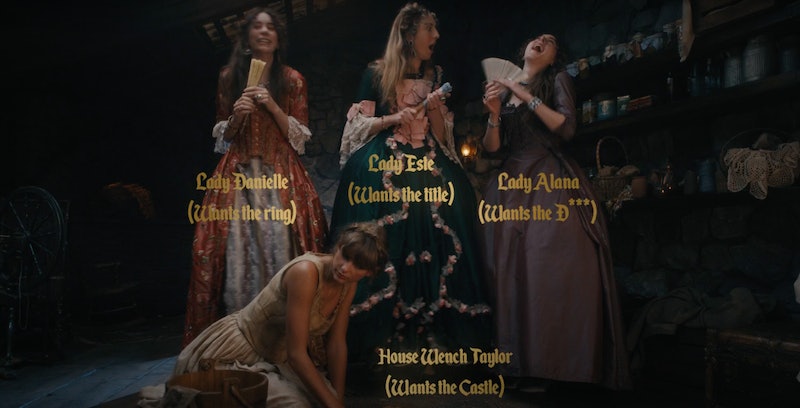 Taylor Swift just created Cinderella (Taylor’s Version). In her new Midnights music video for “Bejeweled,” which premiered at midnight on Oct. 25, the 11-time Grammy winner plays a modern-day Cinderella, who’s called House Wench Taylor by her cruel family. But rather than fall in love with Prince Charming, she impresses the entire ball with a knockout performance that wins the talent competition, earning Swift her coveted castle and a marriage proposal.

After the release, Dern took to Twitter to share on-set photos of Swift in action: “Thank you to my director @taylorswift13 for inviting me to join her party and celebrate her triumph!!”

The “Bejeweled” video contains so many Easter eggs (“a psychotic amount”) that Swift’s team had to keep track of them in a PDF file, as she told Jimmy Fallon before the video’s premiere. Most of the easter eggs hinted at the upcoming release of Speak Now (Taylor’s Version), which immediately sent Swifties into a frenzy. Between the dazzling visuals, quotable one-liners, A-list guest stars, and endless Easter eggs, Twitter became very overwhelmed by the video.

Many fans pointed out how Swift subtly celebrated her personal and professional growth in the video, like how she went from her castle crumbling down in her 2017 deep cut “Call It What You Want” to keeping the castle for herself at the end of the “Bejeweled” video.

As fans worked to uncover all of the Speak Now-related Easter eggs in the video, they also created memes about them.

Some fans continued to celebrate how Swift wrote and directed the “Bejeweled” music video, which marks the ninth video that she’s helmed.