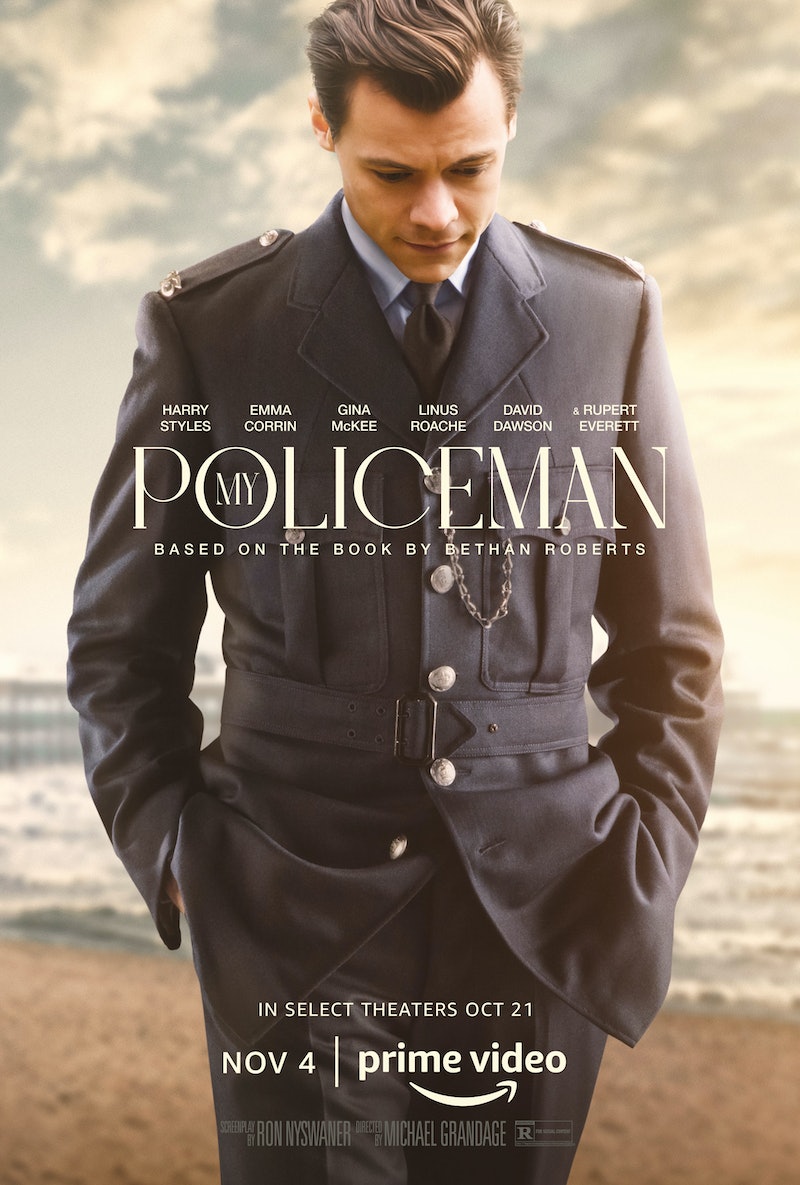 2022 has already been an especially good year for Harry Styles stans — from the continuation of Love on Tour to the celebrated release of Harry’s House (whose lead single, “As It Was,” has spent five weeks and counting at No. 1 on the Billboard Hot 100). And there’s more to come this fall, when two (2!!!) Styles-starring movies will be making their debut. First is September’s Don’t Worry Darling, anticipated as much for its mysterious vibes as for the IRL relationship between Styles and director Olivia Wilde.

Then comes My Policeman, the period romance that promises to be similarly steamy — in fact, as Styles told Howard Stern, it features his first scene sans clothing, ever. (“There's no peen in the final cut,” he clarified, but “there's bum bum.”) But those specifics aside, what is My Policeman all about? Here’s everything you need to know about the rest of the My Policeman cast, plot, and newly released photos teasing the 1950s drama.

In addition to Styles — the titular policeman, Tom Burgess — the My Policeman cast includes The Crown’s Emma Corrin as Marion, a teacher, and Peaky Blinders’ David Dawson as Patrick Hazelwood, a museum curator.

In a June 9 first look, director Michael Grandage opened up to Vanity Fair about casting Styles in the lead role — and why it’s a pretty meta choice. “This story is about two people that are in love with Tom, slightly obsessed with him,” he said. “Harry — the world is so transfixed on him, on his every move.” The director added that Style’s limited acting experience was a benefit to the project.

“Because he hasn’t done much, he hasn’t developed the ability to work out tricks or even lie,” Grandage explained. “He can only do it truthfully and as he knows it.”

Styles’ policeman, Tom, is in a relationship with Marion — while also having a private affair with Patrick Hazelwood. “Forced to repress his true feelings, he decides to marry Marion, and as tensions rise between the married couple, Patrick’s life ends up in shambles,” Vanity Fair notes of Tom, who is not out.

Per an official synopsis from Prime Video, the film will also flash to the future of the trio — who “are still reeling with longing and regret, but now they have one last chance to repair the damage of the past.” If you aren’t too spoiler-averse, you can figure out how the love triangle ends before even watching the movie — because My Policeman is actually based on Bethan Roberts’ 2012 novel of the same name.

My Policeman will be released in theaters Oct. 21, and will be available to stream on Prime Video starting Nov. 4.

This post will be updated with additional details as more information on My Policeman becomes available.