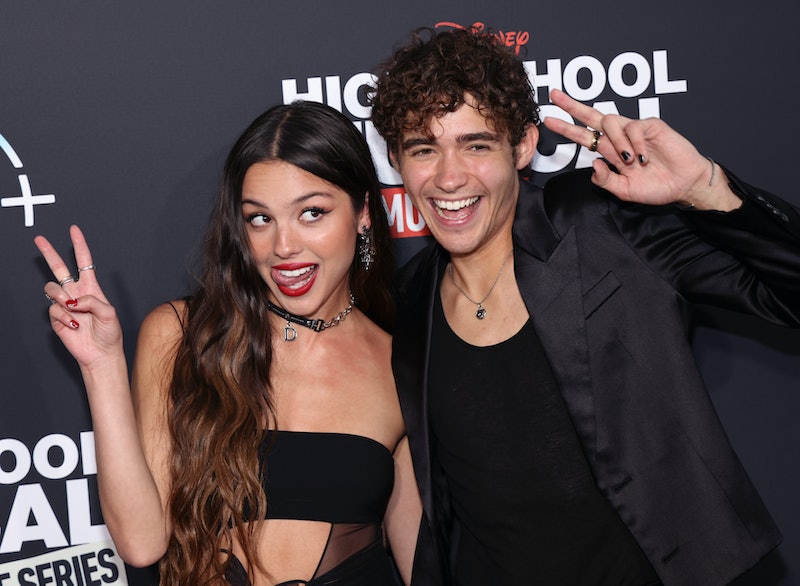 Disney really can make miracles happen. Olivia Rodrigo and Joshua Bassett reunited for the first time since the great “Drivers License” saga of 2021 at the premiere of High School Musical: The Musical: The Series Season 3 on July 27. The onscreen love interests and rumored offscreen exes posed for photos on the red carpet, some with just each other and others with co-stars Matt Cornett and Sofia Wylie, sending Twitter into absolute mayhem.

After the premiere, Rodrigo took to Instagram to share a red carpet photo with Bassett Wylie, and Cornett, as well as one with the entire HSMTMTS cast and crew, slyly acknowledging the rumored subject of her hit song by tagging Bassett in the post. “love all these people so so so much,” she captioned the post. “knowing and working with them has been one of the greatest joys of my life. episode 1 of season 3 of hsmtmts is streaming now! wildcats forever.”

In December 2021, Bassett told GQ that he attempted to connect with Rodrigo after releasing songs that were supposedly written about each other, but she “hasn't spoken to me since ‘Drivers License’ came out.” Naturally, when they reunited on the red carpet and happily posed for friendly photos, fans were both surprised and elated at the sight of the duo together once again.

Rodrigo and Bassett first met in 2019 while preparing to shoot the first season of HSMTMTS, in which their characters Nini and Ricky have a history of dating. Fans have long speculated that the two started dating in real life and broke up sometime in 2020. The relationship allegedly inspired Rodrigo’s Grammy-winning breakout single “Drivers License” and much of her eventual debut album Sour, and after Bassett was spotted with fellow Disney star Sabrina Carpenter, fans thought she was singing about him moving on. In turn, it’s rumored that Bassett wrote some of his newer songs, including “Crisis” and “Secret,” in response to Rodrigo and the public outcry against him.

Neither of them have ever confirmed their romance or split, but regardless, they had to deal with the fallout of their rumored love triangle. In December, Bassett opened up to GQ about the hate and threats he received after “Drivers License.” “I would see TikToks with like 50 million views and 10 million likes saying, ‘I’m going to f*cking kill him,’” he recalled. “It’s hard to see that and then be living in New York and walking down the street.” Despite having to relive it, Bassett said he had moved on from his situation with Rodrigo and changed because of it. “People don't realize how long ago that was,” he said. “It's not as recent as it seems. I'm a completely different person now.”