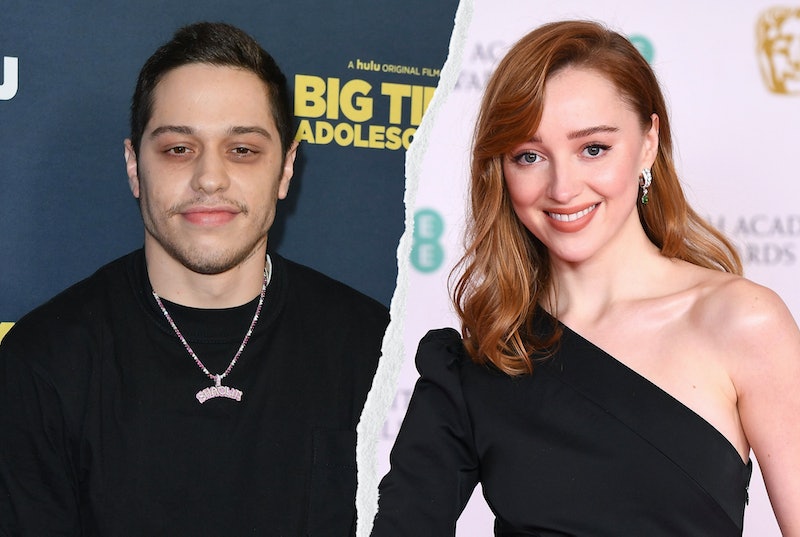 Did Pete Davidson just confirm his rumored relationship with Bridgerton’s Phoebe Dynevor? It’s certainly possible. During an interview with Marquette University students on Sunday, April 11, the Saturday Night Live star was asked to reveal his biggest celebrity crush. Fortunately, the 27-year-old didn’t have to think too hard because, well, he’s currently in a relationship with them.

“I’m with my celebrity crush,” the comedian teased with a wide smile, confirming that he is once again off the market. “That’s all I can speak on.” Despite not mentioning who he’s dating by name, recent reports suggest that he and Dynevor have been hitting it off in recent weeks. Page Six was the first to report their rumored romance on March 22, claiming that the two had been “spending time” together. The outlet added that the Bridgerton star visited New York, where Davidson lives, in February to film Younger. In March, the SNL star reportedly visited Manchester, where Dynevor lived with her mother throughout the pandemic.

Davidson’s cheeky comment comes just a few weeks after Us Weekly reported that the two are trying to make things work long-distance. “Pete and Phoebe are still going strong despite not being able to physically spend time together,” one of their sources revealed. “They keep in touch over text and FaceTime. Right now, they’re just focused on work. … They’re not looking to rush things.” The insider also said Davidson is “hoping to visit her for her upcoming birthday,” which is on April 17.

While it doesn’t seem like things are super serious quite yet, Us Weekly’s insider revealed that the pair is “seeing where their relationship goes.” “They’re happy with each other,” the source continued. “He makes her laugh. Pete is a good guy and definitely a charmer. He’s easy-going and fun to be around.”

If the reports are true, Dynevor wouldn’t be the first A-list celebrity to be charmed by the King of Staten Island star. In June 2018, Davidson proposed to pop star Ariana Grande and they broke off their engagement four months later. He addressed their split on SNL’s Weekend Update in November. “The truth is, it’s nobody’s business," he said. “Sometimes things just don’t work out, and that’s OK. She’s a wonderful strong person, and I genuinely wish her all the happiness in the world.” In January 2019, he went on to date Kate Beckinsale, but they called it quits in April. Margaret Qualley and Kaia Gerber are among his other exes.

Per Daily Mail, Dynevor’s most recent relationship was with Skins actor Sean Teale in 2017. However, when Bridgerton premiered, rumors began floating around that she was dating her co-star Regé-Jean Page. “I’d love to say there was really something between us, but no, it has always been strictly professional,” the 25-year-old actor told You magazine in February. “There was so much pressure on us to get it right that it was all about the work. We have a really professional working relationship. I’m glad for that, actually. It would be very complicated if it went further.”

More like this
Hilary Duff's Husband Matthew Koma Has Her Name Tattooed On His Butt
By Jake Viswanath and Stephanie Downs
Who Is Pete Davidson Dating? He & Chase Sui Wonders Got Caught Kissing
By Jake Viswanath
Did Pete Davidson Remove His Kim Kardashian Tattoos? Photos Point To Yes
By Alyssa Lapid
Vanessa Hudgens Is Reportedly Engaged To Cole Tucker
By Jake Viswanath
Get Even More From Bustle — Sign Up For The Newsletter
From hair trends to relationship advice, our daily newsletter has everything you need to sound like a person who’s on TikTok, even if you aren’t.