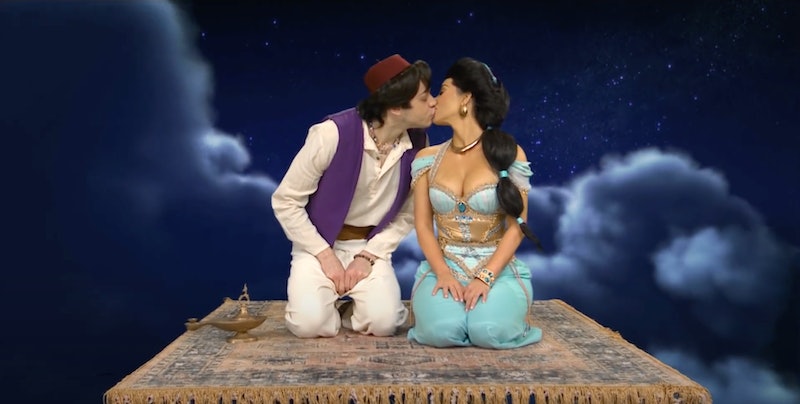 Kim Kardashian’s Saturday Night Live hosting debut in October 2021 sparked one of today’s most unexpected romances with SNL star Pete Davidson. Now on April 6, during a group interview with her family on Jimmy Kimmel Live, Kardashian revealed the sentimental Valentine’s Day gift that she received from Davidson — and it all ties back to their initial SNL encounter.

Weeks before they actually started dating, fans first saw the new couple together in the Aladdin sketch on SNL, where Davidson parodied the title character and Kardashian played Jasmine. The reality star told host Jimmy Kimmel that the kiss in the sketch was actually their first kiss, so for Valentine’s Day, Davidson asked the SNL props and costume department for some mementos from that special moment. “For Valentine's Day, he got me the rug and the whole outfits, and the little Genie lamp,” she told Kimmel. “So I do own the rug.”

Although Valentine’s Day passed weeks ago, the gifts haven’t stopped coming in. Kimmel revealed that his team “had to carry in a huge bouquet of flowers that Pete sent for you here.” Kardashian’s sister Kendall Jenner said she didn’t know that happened, to which Kimmel quipped, “You’re going to have to call Devin,” nodding to her NBA player boyfriend Devin Booker.

Kardashian and Davidson first sparked dating rumors when they were spotted holding hands in Los Angeles just a couple weeks after her SNL stint. At first, reports insisted they were just friends, but when she was seen in Davidson’s hometown of Staten Island, fans figured it was the real deal. The two kept quiet about their romance at first, meaning fans shouldn’t expect to see Davidson on his girlfriend’s upcoming new Hulu show The Kardashians. However, in recent weeks, Kardashian has been more open about her relationship with the comedian.

On April 6, just before the family talked to Kimmel, Kardashian revealed how serious she was with Davidson in her family’s ABC interview with Robin Roberts. “I am a relationship kind of girl, for sure, and I wouldn't be with someone if I didn't plan on spending a lot of my time with them,” she said. “Obviously, I want to take my time, but I'm very happy and very content. And, it's such a good feeling to be at peace.”

More like this
Kim Kardashian Gives “Bucket List Dream” Lecture At Harvard
By Alyssa Lapid
Khloé Kardashian Writes Touching Instagram Tribute To Tristan Thompson’s Mother
By Alyssa Lapid
Travis Barker's New Tattoo Is Causing Some Awkward Confusion Among Fans
By Stephanie Topacio Long
Kourtney Kardashian's Daughter Penelope Rates Mason’s Sneakers On TikTok
By Alyssa Lapid
Get Even More From Bustle — Sign Up For The Newsletter
From hair trends to relationship advice, our daily newsletter has everything you need to sound like a person who’s on TikTok, even if you aren’t.