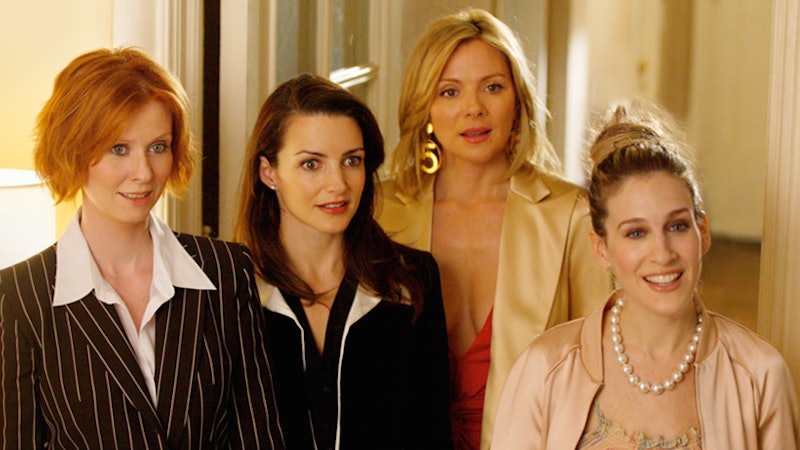 Sarah Jessica Parker was the absolute standout star of HBO’s Sex and the City, a romantic dramedy based on Candace Bushnell’s 1997 book of the same name. Though, it’s only fair to admit Carrie Bradshaw’s eye-catching wardrobe definitely came in at a close second. If you were completely taken by the character’s smile, charm, or the sparkle of her studded Manolo Blahniks — questionably expensive shoes for the writer of one weekly newspaper column — we can’t blame you. But allow us to pause the Carrie praise to illuminate a few of the famous actors who made guest appearances on Sex and the City that you may have forgotten about.

Plenty of familiar faces made appearances throughout the series’ 94-episode run, and that’s not counting the two subsequent theatrical films. From Jon Bon Jovi, Alanis Morissette, and Vince Vaughn to Elizabeth Banks, Hugh Hefner, and Justin Theroux (twice!), SATC is listed on the resumes of quite a few Hollywood actors. If you were too enamored by Carrie, Miranda, Charlotte, and Samantha’s love, sex, and drama-filled storylines to notice the celebrity guest stars, that’s understandable. But with the Dec. 9 premiere of HBO Max’s spinoff series, And Just Like That…, you may want to refresh your memory in case any of them return to the world of SATC — especially in Samantha’s absence. Here are seven famous faces you may not remember landed roles on Sex and the City.

Feeling melancholy after her “Single and Fabulous” New York magazine photoshoot unexpectedly went awry, Carrie stays out extra late at a club and encounters Jake (Bradley Cooper), who kindly lights her cigarette. But after passionately kissing in his Porsche, Jake stops to buy more smokes and encounters Carrie’s issue of New York, taunts her with it, and prompts her to walk home alone.

The Grey's Anatomy actress graced the SATC set in 2002 for the Season 5 premiere, titled “Anchors Away,” the show's first episode to be filmed after 9/11. After Samantha’s heart is broken by a man who said he loved her and subsequently slept with another woman, she sets out to hang signs labeling him a “cheater” and a “liar” around Manhattan. A police officer (Chandra Wilson) approaches to let her know she’s defacing public property with the posters, but after Samantha clues her in on the man’s behavior, she allows her to continue.

Long before starring on shows like 2 Broke Girls and Dollface, a 13-year-old Kat Dennings appeared on Season 3’s “Hot Child in the City” as a stuck-up rich kid who’s obsessed with Carrie’s column and wants Samantha to handle publicity for her upcoming bat mitzvah. Intimidated by her stark confidence, brash language, and immense wealth, Samantha wants to turn down the gig but accepts when she learns of its $1 million budget.

Samantha’s hip-hugging jeans weren’t the only thing spicing up Season 6 Episode 10 of SATC, titled “Boy, Interrupted,” as Ginger Spice herself made an appearance. While trying to find relief from the New York City summer heat, Samantha runs into a friend named Phoebe (Geri Halliwell), who boasts about getting misted with Evian water while sipping cocktails at Soho House — prompting Samantha to try and sneak in.

After turning down a story arc as a Black man Samantha dates out of curiosity, Blair Underwood appeared on four episodes of SATC’s sixth and final season as Dr. Robert Leeds, who dates Miranda during an off-period in her relationship with Steve Brady (David Eigenberg). He recently spoke to Vulture about his relationship to the role: “If you look at those episodes, I think race is mentioned once, when Kim Cattrall says something about him being a Black doctor. I wasn’t interested in being a curiosity in the ’80s, ’90s, and early 2000s; I wanted to be a full-fledged, well-rounded character.”

Known for his roles in Will & Grace and Amazon Prime’s Homecoming, among other projects, Bobby Cannavale appeared in Season 3 of SATC as Adam Ball, a sexual partner of Samantha’s whose certain bodily fluids are upsetting her taste buds. Taking matters into her own hands, she tries to fix the problem by feeding him healthy food but ultimately realizes they’re just not the right match.

After her three-season run as the star of Comedy Central’s Strangers With Candy, Sedaris appeared on four episodes in Seasons 5 and 6 of Sex and the City as Courtney Masterson, one of the two publicists for Carrie’s book based on her New York Star column. Acting as the other rep was fellow comedian Molly Shannon, who coincidentally starred alongside Sedaris and Parker once again on HBO’s Divorce in 2018.

This article was originally published on April 21, 2015