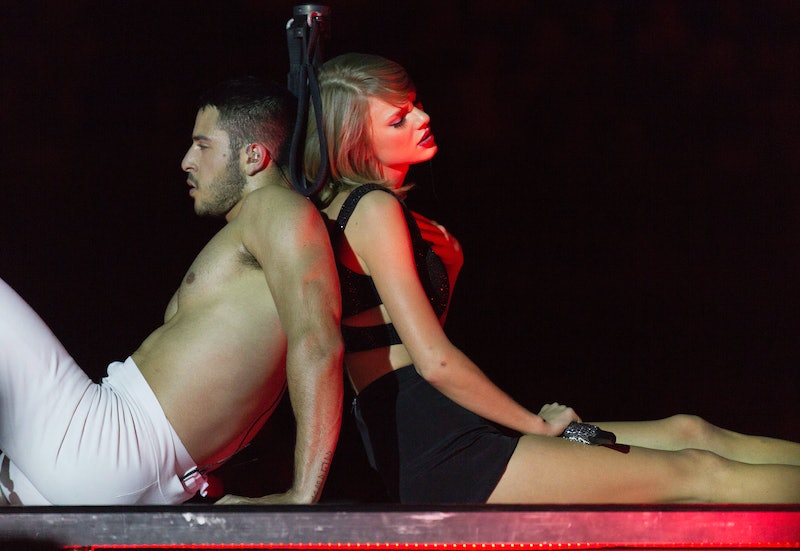 Swifties can probably cure an incurable ailment with the amount of detective skills they’ve gained thanks to Taylor Swift’s frequent easter eggs — but even they get it wrong sometimes. Over the years, Swift’s biggest fans have crafted some intricately detailed and genuinely wild Taylor Swift conspiracy theories, focused on her personal life or what’s to come next from the 11-time Grammy winner. Some have turned out to be spot-on, given the singer’s slightly scary attention to detail. Many theories have merits but have yet to be proven true or false, while others are just so off-base.

In 2022 alone, Swifties have gotten some things wrong in relation to her 10th studio album Midnights, including the back story of a fan-favorite track. But that doesn’t even compare to the more chaotic Swiftian theories, some of which date all the way back to 2014 (anyone remember the snake baby rumor?). To round out what has been a very eventful year for Swift, here are 10 Swiftie conspiracy theories that have turned out to be completely wrong — but still fun to imagine.

Taylor Has No Belly Button

During the 1989 era, some people theorized that Swift didn’t have a belly button because she was mostly seen in high-waisted looks that would naturally hide a belly button. It turns out there was a reason for that, as Swift told Lucky in 2014. “When you start showing your belly button then you’re really committing to the midriff thing,” she said. “I only partially commit to the midriff thing—you’re only seeing lower rib cage. I don’t want people to know if I have one or not.” However, after paparazzi got sneaky vacation photos of her in a bikini, she decided to usurp them and reveal her belly button on Instagram in a since-deleted post, putting the rumors to bed once and for all.

Her Name Is Becky

Becky just might be the start of wild Swift conspiracy theories. In 2014, an iconic Tumblr account posted a now-infamous high school photo of Swift, claiming that it was their friend Becky who died after snorting marijuana. After a user responded, “pretty sure that’s Taylor Swift,” another person affirmed, “no its becky,” which has since become part of the Swiftian dictionary. Swift became a part of the joke by wearing a “no its becky” shirt.

Taylor Had A Snake Baby

Do we even need to explain why this misguided theory turned out to be false? That said, Swift did herself no favors by joking about being a “proud mother of snakes” on Instagram in October 2018.

“Karma” Being A Leftover From Karma

Fans have long theorized that Swift planned to release an album named Karma in 2016 before Kimye-gate caused her to halt plans and scrap the album completely, then ultimately releasing Reputation in 2017. There’s some solid hints to support this theory, but the case was made strongest when Swift revealed that Track 11 on Midnights was called “Karma,” complete with a maniacal laugh. This fueled the belief that Karma was real and the long-lost title track was finally seeing the light of day, but fans jumped to conclusions too soon, as Swift has since confirmed that every song on Midnights was new material written specifically for the album. Therefore, the mystery of Karma remains, and while there’s no hint of it on Midnights, there’s also no definitive proof that the theory isn’t true yet.

The Existence Of Woodvale

After Swift surprise announced Evermore, the “sister record” to her previous 2020 surprise album Folklore, fans started thinking that it was actually the second part of a trilogy. This theory gained more traction after fans spotted the word “Woodvale” on some CD copies of Folklore, which doesn’t contain any text on its eight covers, leading fans to believe that another Folklore sister album named Woodvale would arrive at any moment. But Swift debunked this, explaining that “Woodvale” was simply a test word used while designing the Folklore album covers to prevent the actual title from being leaked before it was announced. Still, to this day, some Woodvale truthers are holding out hope.

The Midnights Phone Being Upside Down

Swift unveiled the Midnights tracklist one at a time on her TikTok series “Midnights Mayhem With Me,” where she drew one of 13 numbers from a bingo machine and revealed that song title through an old-fashioned landline. For two of the songs, “Anti-Hero” and “Vigilante Shit,” she held the phone upside down, which fans thought was a code for something to come. “Anti-Hero” ended up being the album’s lead single and first music video, leading some to believe that “Vigilante Shit” would be the second video that was teased during Midnights release week. Instead, the video was for “Bejeweled,” and with the final music video teased in the Midnights trailer being for “Lavender Haze,” it’s become clear that the phone being upside down meant absolutely nothing.

The Internet has a found a couple of Swift’s supposed “twins,” but nothing is funnier than the rumor that she sent her twin sister to Japan. In 2015, an old Japanese McDonald’s commercial went viral because the model looked eerily like Swift, just in a bright red wig and striped Ronald McDonald costume. Fans went wild, speculating that this was Swift’s actual evil twin who was banished to Japan so she didn’t get in the way of her sister’s career, forcing her to model for McDonald’s. Swift only has one sibling, a younger brother named Austin, so the theory doesn’t track. But honestly, if it were true, it’s not the worst life to lead. That tomato burger looks good.

Five Holes In The Fence

In February 2019, Swift shared an Instagram photo of her looking through a fence. There were five holes in said fence. Many fans were convinced that this meant something, and clung to many different theories about what the five holes could mean before every single one of them were proven false. Swift even joked about the endless theories by reposting the same photo that August, five days before the release of her 2019 album Lover, writing, “Okay NOW there are five holes in the fence.” Needless to say, Swifties will never live this one down.

In all fairness, Swifties getting this one wrong is partially Swift’s fault. After the April 2021 release of Fearless (Taylor’s Version), Swift went on The Late Show With Stephen Colbert and gave approximately a bajillion hints about the impending release of 1989 (Taylor’s Version), all but confirming that it would be her next re-recording. Instead, she announced Red (Taylor’s Version) two months later, and the new version of 1989 has yet to be released despite three singles coming out already (likely due to the recently dismissed “Shake It Off” lawsuit).

With every album release, a subset of Swifties try to find hints proving their belief that Swift is actually gay or bisexual, spawning the #Gaylor fandom. Some of these fans believe that the singer dated Karlie Kloss, citing crowd photos that some claim are of the two kissing at a concert, and Dianna Agron, who denied the rumors in a 2012 interview. Since then, these fans have speculated that songs from “Betty” to “Lavender Haze” contain LGBTQ-coded lyrics, even if disproven by the singer, as is the case with “Lavender Haze.” While Swift has become an outspoken ally to LGBTQ+ communities, she has never spoken out about the Gaylor theories or Kloss dating rumors, but her ongoing six-year relationship with boyfriend Joe Alwyn speaks for itself.