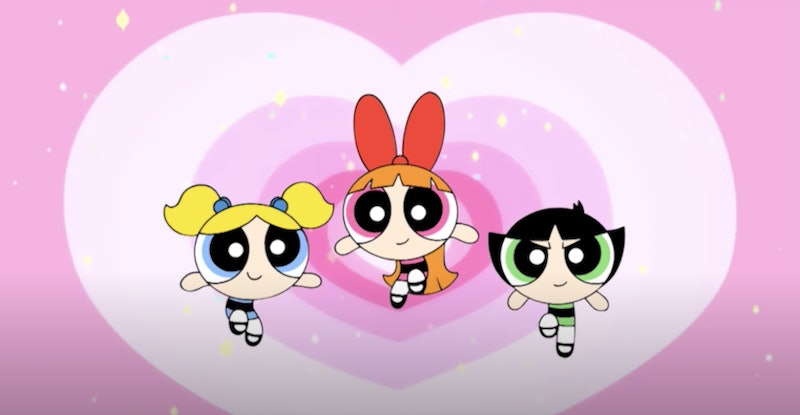 If you've ever wondered what Blossom, Buttercup, and Bubbles would be up to today, you're about to get your answer. A new Powerpuff Girls live-action series will see the crime-fighting tots all grown up. Though the original pilot was recently scrapped and is currently being reworked, unlike their previously pint-sized selves, they're supposedly not too enthusiastic about saving the day anymore.

This new Powerpuff Girls interpretation is being developed by Juno screenwriter Diablo Cody and Heather Regnier, who are co-writing and co-executive producing, alongside executive producers Greg Berlanti, Sarah Schechter, and David Madden, who are known for their television hits ranging from The Flash to Chilling Adventures of Sabrina. And the creative combo definitely suggests that the show will be a little less Cartoon Network and a little more Riverdale.

It's unclear how much of the original show, which ran from 1998 to 2005, will be incorporated into this updated reboot. Will Blossom, Bubbles, and Buttercup be humans, or will they be created by Professor Utonium, like in the cartoon, with sugar, spice, and everything nice? Will they still live in Townsville, USA, and will their nemesis still be a genetically enhanced green chimp named Mojo Jojo? Most importantly, will they have grown into their oval heads and giant eyes? All questions that need to be answered! Here’s everything we know so far about The Powerpuff Girls reboot:

On Feb. 9, Variety reported that The CW had ordered a pilot for the live-action series but as of Tuesday, May 25, The CW is making some changes. During a press call, The CW chairman Mark Pedowitz told reporters that “the pilot didn’t work,” adding that they just “want to get it right.” According to The Hollywood Reporter, Pedowitz said, “It may have felt a little too campy and not rooted in reality.” The reason for this rewrite seems sudden and a bit odd. After all, how rooted in reality can a cartoon about lab-created superhero children be?

We don’t know how much the new pilot will veer from the intended plot but according to the Feb. 9 Variety report, the original was supposed to follow the three sisters in their mid-20s, feeling robbed of their childhoods due to their time as crime-fighters. Though images that circulated online in April 2020 showed the cast dressed in costumes heavily inspired by the original series, this is sure to be a modern reimagination. The once-fiery Blossom has become reclusive due to trauma and anxiety, and the sweet Bubbles is now tough and fame-hungry. The defiant Buttercup has grown to be the opposite: sensitive and in search of anonymity. But, no matter how bitter they feel about their crime-fighting pasts, when a new threat arises, they might be forced to reunite and put on their super suits once more.

On March 9, Variety reported that actresses Chloe Bennet, Dove Cameron, and Yana Perrault will be portraying Blossom, Bubbles, and Buttercup, respectively. The CW pilot will be a reunion for Bennet and Cameron, who played enemies on ABC and Marvel’s Agents of S.H.I.E.L.D. Bennet’s other notable roles include ABC’s Nashville and Dreamworks’ Abominable, Cameron’s catalog includes Disney’s Liv & Maddie and Descendants, and Perrault most recently appeared in Jagged Little Pill, the Broadway musical based off of Alanis Morisette’s 1995 album of the same name.

After the casting news broke, Bennet took to Twitter to express her excitement. “I’m so f*cking excited for this,” she tweeted alongside a photo of the animated trio. “I’m a heckin’ Powerpuff Girl now wtf,” she wrote in a follow-up tweet.

Also on March 9, Cameron re-posted a 2013 tweet in which she wrote, “I really just want to play Bubbles in a live-action Powerpuff Girls movie,” and added exclamation points. Then she tweeted, “I cannot WAIT for you guys to see this show. The script is unreal, I don’t think I’ve ever laughed out loud so much reading anything.” She continued, “Without giving anything away, as a huge fan of this cartoon, this script is my true fantasy!! Stay tuned.”

Meanwhile, Perrault took to Instagram to share the news. “Bag secured,” she jokingly wrote in the caption. “No really, v grateful. This is too dreamy to believe, so many feelings, still processing, on cloud 9,” she continued.

Initial fan reactions ranged from excited to confused, with many predicting The Powerpuff Girls reboot would be another dark, "edgy" teen show, like Riverdale.

Meanwhile, other fans were extremely skeptical of the concept.

Luckily for the skeptics, there's actually a Cartoon Network's animated Powerpuff Girls series that launched in 2016. That reboot is available to stream on Hulu, alongside the original show. It might not have Riverdale-worthy drama, but it's a classic for a reason.

Following the casting announcement, however, a wave of support from fans swept social media.

This post will be updated with the trailer as well as additional plot and cast details as more information on The Powerpuff Girls live-action reboot becomes available.

More like this
The Banned 'Friends' Ad Shows Monica As You’ve Never Seen Her Before
By Sam Ramsden
Anne Hathaway Shared A "Thrilling" 'Princess Diaries 3' Update
By Darshita Goyal
9 Time Catherine Cawood Was An Absolute Badass In Happy Valley
By Sophie McEvoy
'Happy Valley' Recreated This Moment From S1 In Its Penultimate Episode
By Sophie McEvoy
Get Even More From Bustle — Sign Up For The Newsletter
From hair trends to relationship advice, our daily newsletter has everything you need to sound like a person who’s on TikTok, even if you aren’t.