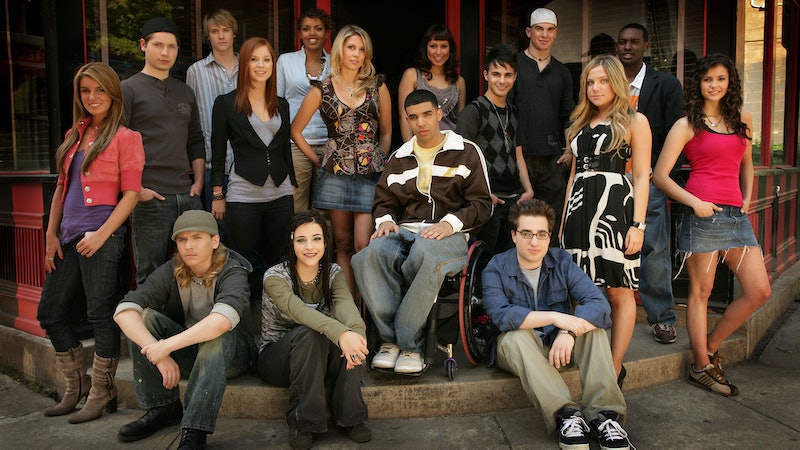 There have been several iterations of Degrassi, starting all the way back in 1979 with The Kids of Degrassi Street. But if you’re Gen Z, a millennial, or somewhere in between, there’s a good chance Degrassi, for you, means Degrassi: The Next Generation. This version of the show premiered in 2001, introduced Drake to the world, and is now streaming all 14 glorious seasons on HBO Max. Plus, a revival is officially on the way at the streamer, so now is a good time to catch up on the long-running teen series.

If you’re currently doing a massive rewatch, like me, you might’ve noticed a few quirks from the pilot. Here are 11 things I noticed rewatching Degrassi: The Next Generation’s two-part series premiere.

Degrassi and Grey’s Anatomy have something in common.

First off, Degrassi is to schools what Grey Sloan Memorial is to hospitals — this building has seen every possible disaster, social issue, and near-death experience known to man. Even more interesting, both shows name episodes after song titles. The first episode, “Mother and Child Reunion,” comes from Paul Simon. Later on, some Degrassi and Grey’s episodes even have the same title, like “Didn’t We Almost Have It All?” and “Owner of a Lonely Heart.”

The theme song is beautiful.

VV Brown’s “Shark in the Water” in Degrassi’s carnival-themed season promo (you know the one) might be the show’s spiritual theme song, but the real one is just as good. The first version of “Whatever It Takes” has a feel-good school chorus vibe — the perfect fit for the wide-eyed students’ earliest days at Degrassi. Fair warning: The lyrics “whatever it takes / I know I can make it through” might make you emotional during your rewatch.

The first episode doesn’t even take place during school.

Degrassi drama is so powerful that it even seeps into school breaks. Remember when Sav Bhandari and Keke Palmer had a spring break fling together? Or when basically every single Degrassi student and graduate went to Hollywood the same summer? It’s only fitting that the show began outside of the academic year, with Emma helping her mom prepare for her high school reunion.

Manny is a style icon.

Manny Santos will forever be known for her thong moment in the halls of Degrassi, but she proved to be a budding style icon even earlier. In Episode 1, she pulls off a vintage hat and a smocked top that would still look great today. As Cassie Steele recently told NYLON, she’s definitely aware of her character’s impact on pop culture, like on Euphoria’s Maddy, for example. “She had these pants, and I was like, ‘Oh that's so that's so Manny-esque, that's so much fun,’” Steele said. “I feel like possibly that was... maybe that's why Manny's look is doing a comeback.”

Her IRL little sister appears on the show twice.

The episode also featured Steele’s little sister, Alexa Steele, as Joey’s daughter, Angela. That’s basic info if you were a Degrassi stan in your day, but if you fell off the show later, you might not know that Alexa returned to play a completely different student named Tori in Season 11.

The adult characters will make you question everything.

If you watched Degrassi as a young teenager, you might have seen the parents and teachers as wizened, grown-up side characters. But when you rewatch the first episode when you’re closer in age to the adults than the kids, you might be startled to realize Spike, Snake, and co. are just in their late 20s. That’s the same age some of your Glee faves were when they were playing high schoolers, and younger than Euphoria’s Alexa Demie, who is 31, according to an apparent former classmate.

But they’re even more interesting this time around.

Once you get over that initial shock, watching early Degrassi as an adult is like discovering a new show that devotes a significant chunk of time to a group of twentysomethings who are at totally different places in their lives. In Episode 1, three high school besties are catching up: Spike has a house and 12-year-old daughter, Caitlin is engaged and worried about turning 30, and Lucy is just doing her thing. “I refuse to have this biological clock conversation,” she says. “Honestly, I don’t even feel it.”

Degrassi wasted no time getting into the drama.

Following in the footsteps of its franchise predecessors, The Next Generation had a reputation for confronting serious, real-world topics — sex, teen pregnancy, and mental health. And was no gradual climb toward that kind of drama. In Episode 1, Emma heads to a hotel to meet a like-minded, eco-conscious teen named Jordan, only to realize she’s been lured there by an adult man. It’s terrifying! Fortunately, her tech-savvy friends, mom, and future stepdad save her just in time.

Degrassi’s characters go through a lot, but they’re generally surrounded by a school and support system that empower them to make informed choices. In the school bathroom, there’s a poster encouraging girls to B.Y.O.C. (bring your own condom) to hookups to protect against sexually transmitted infections. Apparently, it’s a real poster from the Toronto Department of Public Health at the time. It might seem like a tiny thing, but it definitely adds to the texture of the show, reflective of Degrassi’s penchant for talking to teens, not down to them.

We have to discuss the net.

Can we start calling all social media “the net”? It feels nostalgic, and that’s how the kids in Degrassi’s first episode do it. Granted, their early “social media” was largely limited to an email system called “TreeEmail,” with notifications that said things like, “Message alert: You have one rainforest to save.”

Back to Emma for a second. The buildup to her scary hotel encounter is fraught with net safety red flags. One email from the fictitious Jordan includes the phrase “details to follow,” which surely couldn’t have been uttered by an actual 2001 teenager, right?

It has to be said! Mr. Simpson is the heart of Degrassi Community School — a role he’s fond of from Day 1 of teaching. Let’s hope HBO Max gets the memo and brings him back for the revival.