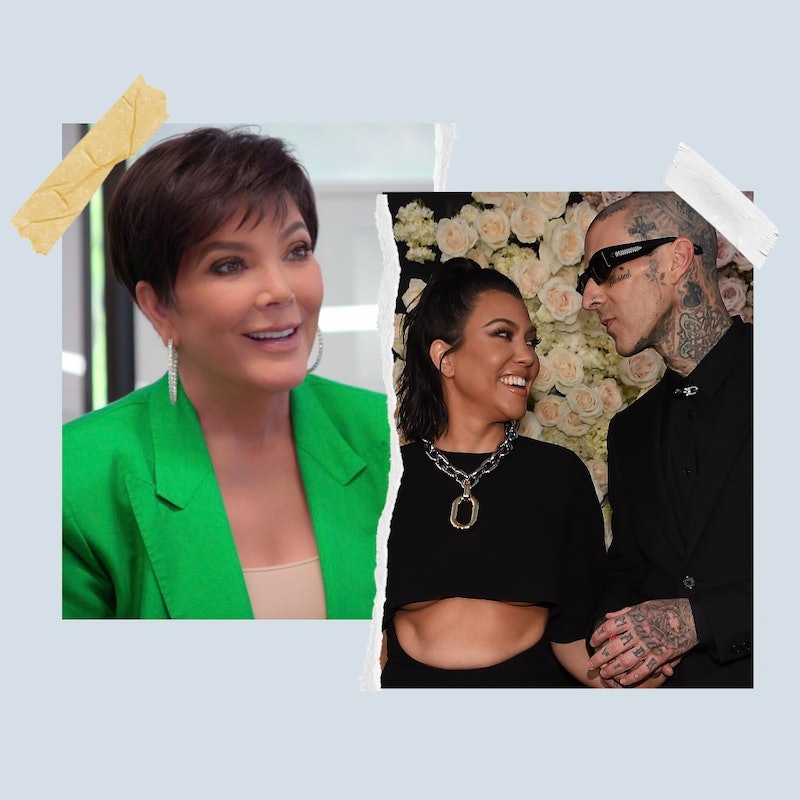 Travis Barker went to great lengths to propose to Kourtney Kardashian — and that’s not including the thousands of tulips he had delivered to a Santa Barbara beach for his romantic proposal. As revealed on Episode 3 of Hulu’s The Kardashians on April 28, the Blink-182 drummer visited the grave of Kourtney’s late father Robert Kardashian to ask for his blessing to marry her.

Now, in an exclusive video teaser given to Bustle from Hulu for Episode 4 of The Kardashians, premiering on May 5, Kourtney’s mom Kris Jenner recalled the emotional moment when Barker asked for her blessing to marry her daughter to Kourtney’s close friend Simon Huck, as they were secretly waiting for Barker to pop the question at a Santa Barbara hotel. “He came over to my house when I was in Palm Springs and asked for her hand in marriage, and I was crying,” she said. “And then he said that he went to her dad’s grave and asked him.”

In a confessional, she explained how much Barker’s gesture to her late husband meant. “There’s not a day that goes by where I don’t think about Robert, and the fact that Travis has so much respect for Robert, and for Kourtney and all of us, means everything,” she said. “It’s so amazing.”

In the April 28 episode, while getting glammed up for her daughter Kim’s SNL rehearsals, Jenner also told Kim about the special moment, which is when she revealed that visited Robert at the cemetery for the same reasons. “Literally, I wanna cry now,” she said. “It was so sweet and so tender. And then he said he went to your dad’s grave and asked your dad, and I just lost it.” While Kim was appreciative of his gesture, she was more worried about crying and ruining her makeup. “OK, guys, I have to work. Why are you doing this to me?” she asked. “It’s all happy,” Kris responded. “I just wish your dad was here to see it.”

Evidently, Kourtney’s dad gave his blessing. Travis popped the question to Kourtney on Oct. 17, 2021, and she said yes, announcing the news on Instagram the next day. “forever @travisbarker,” she captioned photos from the extravagant oceanside proposal. On April 3, the couple got Vegas married after the Grammys. “Once upon a time in a land far, far away (Las Vegas) at 2am, after an epic night and a little tequila, a queen and her handsome king ventured out to the only open chapel with an Elvis and got married (with no license),” she captioned her Instagram post. “Practice makes perfect.”

As Kourtney told Jimmy Kimmel days later, they were not able to obtain a marriage license at 2 a.m., so they simply had a ceremony officiated by an Elvis Presley impersonator, with Khloé on FaceTime and Kim asleep, blissfully unaware of the entire affair. “We just did it anyways, it’s what’s in the heart,” she said.

This article was originally published on April 28, 2022