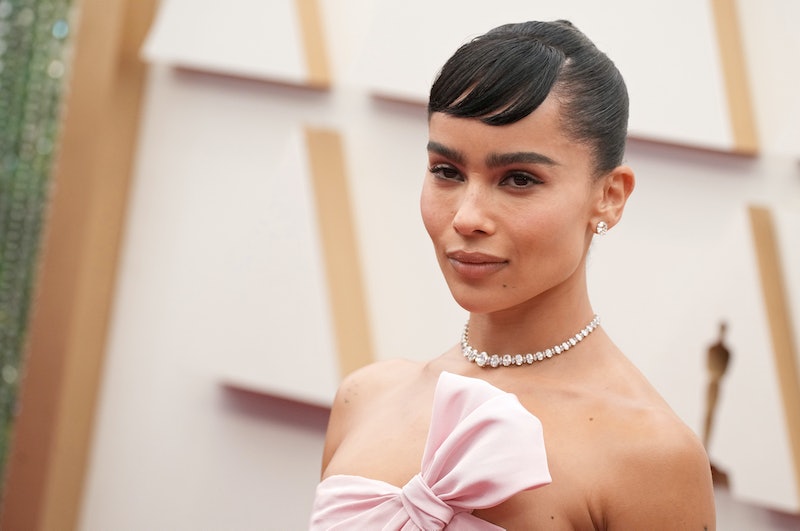 With tensions still running pretty high after the Oscars on Mar. 27, and opinions increasingly divided, there’s still new drama developing pulling more and more celebs into the mix. And the latest celeb to comment on Will Smith slapping Chris Rock on stage is The Batman star Zoe Kravitz. In an Instagram post about her pink Academy Awards red carpet look, the actress seemingly threw shade at Will Smith in the caption. “Here's a picture of my dress at the award show where we are apparently assaulting people on stage now,” she wrote on Mar. 29. And it’s safe to say Twitter is less than amused with this recent intervention.

Almost instantly, the replies came pouring in. Some accused Kravitz of a history of not wanting to be associated with Black culture. Referencing her 2015 Nylon interview, the Twitterverse unearthed quotes to confirm this sentiment, while also accusing her of trivialising and watering down Black culture. "I identified with white culture, and I wanted to fit in," she told Nylon. "I didn’t identify with Black culture, like, I didn’t like Tyler Perry movies, and I wasn’t into hip-hop music. I liked Neil Young."

Other accounts simply expressed a ​​colloquial, “she should have just sat there and ate her food,” suggesting a lack of comment altogether may have avoided the swarm of responses.

On a more serious note, some people also dusted off Kravitz’ comments about a then 14-year-old Jaden Smith. Sounding the hypocrisy alarm, Twitter users branded them inappropriate and creepy. Co-starring in After Earth in 2013, she told V Magazine, “I was always like, when you’re older, you know, we’ll hang out… Nope, that’s inappropriate, you’re 14,” per Metro.

Fanning the flames even further, but more humorously, memes depicting “the fall of Zoe Kravitz” rolled in quickly, too. From “Zoe Kravitz lost all her Twitter hype in 30 minutes”, to calls for Bridgerton’s Simone Ashley to be elevated to “new’ it-girl status, now that Kravitz has been “cancelled”.

In that same vein, Zendaya is apparently in the running to be re-crowned it-girl, too (in truth, we didn’t get the memo she’d been demoted). And the use of real reaction clips from the Oscars audience, during the slap, has made this all that more chaotic.