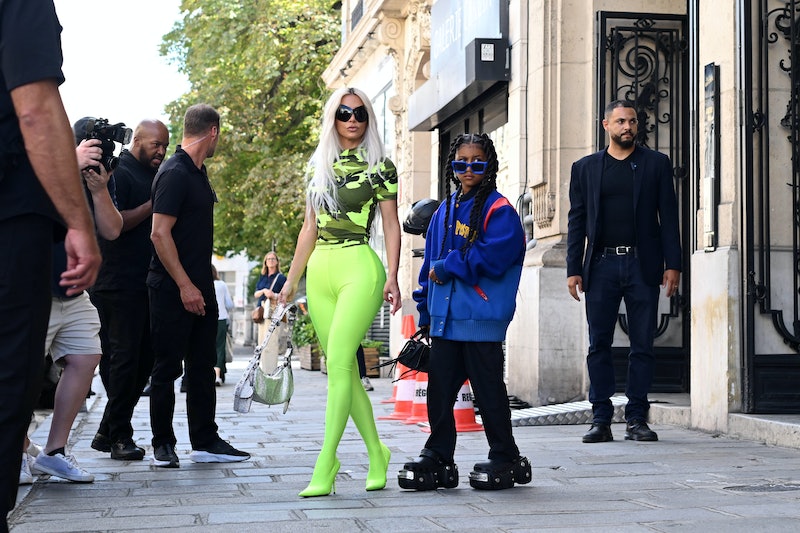 North West is quickly cementing her status as the content creator of her generation. On Jan. 5, North and mom Kim Kardashian shared a TikTok video on their joint account of them lipsyncing to Taylor Swift’s “Shake It Off” — possibly kickstarting the end of a years-long feud. Within 24 hours, they posted another video, this time singing to Kanye West's "Bound 2" with the nine-year-old cosplaying as her rapper father (complete with mustached makeup). If you’ll recall, the song’s infinitely-parodied music video featured a naked Kim canoodling Ye on a motorcycle.

After their messy divorce, Kim revealed that co-parenting with the “Heartless” rapper has been “really f*cking hard.” But Kim previously revealed that she shields her kids from the drama surrounding her ex-husband, so it’s also likely that North just likes her father’s music and is highly skilled at persuading her mother to participate in her TikTok ideas.

Naturally, the clip left many with questions. Is North’s makeup KKW Beauty? What did the brainstorming process for this TikTok look like? And, the question Twitter is asking: What were they thinking? No eight-second lip sync TikTok video has caused quite as big a stir. Since the comments section on the @kimandnorth account is unfortunately closed, many flocked to Twitter to share their thoughts. And apparently, the clip has Twitter divided. Bustle reached out to Kardashian for comment and did not hear back at the time of publication.

Many users are here for it. One user heaped praise on North, saying, “North dressing up as Kanye and making tiktoks with kim to his music… she’s a star already she’s f*cking hilarious.”

Some users, however, found it confusing. “It is genuinely the creepiest f*cking thing I’ve ever seen,” one user wrote. Another said, “NAH CAUSE WHOS IDEA WAS THIS Kim and North TikTok is WILD.”

Someone pointed out that Kanye disapproved of North being on the platform. “Kim Kardashian transforms her daughter North into Kanye West for TikTok, after Kanye West says he doesn’t want his kids on TikTok,” the user wrote.

Wherever you stand on the TikTok discourse, no one can deny the chokehold that the mother and daughter’s account has on us. User bbluthor wrote, “which was more culturally significant the renaissance or kimandnorth tik tok account.”