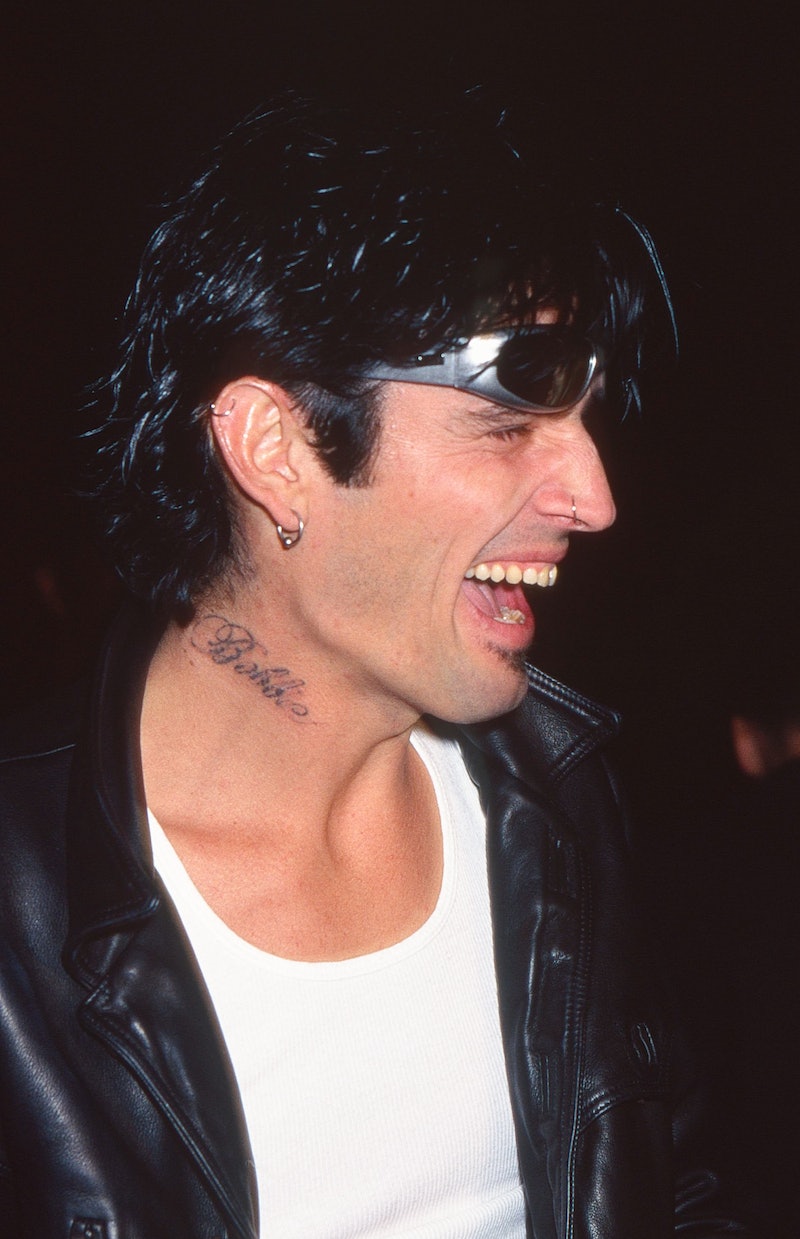 Lily James and Sebastian Stan may be completely unrecognizable as Baywatch star Pamela Anderson and Mötley Crüe drummer Tommy Lee on Hulu’s Pam & Tommy miniseries, but the titular couple’s marriage is one of Hollywood’s more infamous sagas. Their relationship included a scandal wrought by a stolen sex tape circulated in the early days of the internet, as well a six-month jail sentence for Lee for spousal battery following an incident with Anderson and their two children — both of which the Hulu series will dive into.

While Lee’s marriage to and divorce from Anderson may have been his most publicized relationship, the 59-year-old musician’s dating history is eventful, to say the least. Anderson, 54, was his third wife, and he’s had a few high-profile engagements that fell through before and after. For those wondering about Lee’s current relationship status, he’s been married to actor and social media star Brittany Furlan since 2019. Here’s everything to know about Lee’s dating history and his famous exes.

Furlan, 35, found social media success on the now-defunct platform Vine, where she became one of its most-followed users. She enjoyed about 9.9 million followers before it went offline and was even named one of Time’s 30 Most Influential People on the Internet in 2015 for it. These days, Furlan has a combined follower count of more than 4 million on Instagram and TikTok, where she often features her husband. Furlan has since branched out into acting and starred in We Are Your Friends, The American Meme, and Amazon Prime’s Paradise City, which is ongoing.

Furlan and Lee were first spotted in LA in June 2017 and were apparently fans of each other long before dating. In an interview with Fox News, Furlan shared, “We met online, but we knew about each other for years. He used to watch my Vine videos — he was one of my followers, and obviously, I loved his music. I was a Methods of Mayhem fan and Mötley Crüe fan.”

They announced their engagement on Valentine’s Day the following year. On Feb. 14, 2018, Furlan shared her heart-shaped diamond on Instagram with the caption, “Well this certainly beats chocolates! Say hello to future Mrs. Lee.”

Their Feb. 14, 2019 wedding marks Lee’s fourth marriage, and since their nuptials, he’s become a recurring guest on Furlan’s TikTok.

Right before dating Furlan, Lee dated singer Sofia Toufa, 38, better known as SOFI, from 2009 to 2017. They even collaborated on a few singles in 2013, including “Middlefingah” and “The Rules.” The two got engaged in February 2014, and Lee made the announcement on Twitter with the caption, “There comes a time in a mans life when you just know your partner is for LIFE!! Say hello to my fiancé and soon to be wife @SOFIofficial.” Toufa also took to Twitter, writing, “I'm something that rhymes with Beyonce!!!!!” The wedding never pushed through.

Lee’s most notorious whirlwind romance was with Anderson, whom he married in 1995 after knowing each other for four days. They met on New Year’s Eve when she sent him a drink from across a bar, licked her face, and followed her to Mexico, where they wed.

Their tumultuous marriage lasted three years and was rife with headline-making drama, including the sex tape scandal that followed Anderson’s career. After their electrician Rand Gauthier stole and sold a tape with intimate content, the two were embroiled in a legal battle for two years and filed a $10 million lawsuit.

They finally split in 1998 following Lee’s battery assault of Anderson that landed him in jail for six months. The altercation happened in February 1998, and she filed for divorce a few days later. Despite splitting up, the two remained in an on-again, off-again relationship for years until they finally split in 2008. Anderson and Lee share two sons, actor Brandon, 25, and model Dylan, 24.

When Lee was 23, he married Melrose Place actor Heather Locklear, who was 24 at the time. They wed in May of 1986 with about 500 guests in attendance, according to People. An unconventional love story, Locklear proposed to Lee after three months of dating, and the two were together for eight years until their divorce in 1994. That was Lee’s second marriage. In May 2016, Locklear posted a cheeky Instagram photo of the two of them with the caption, “Happy 30 years baby,” proving there’s no animosity between the exes.

Prior to his more famous marriages, Lee was briefly married in 1984 to his first wife, Elaine Bergen (neé Starchuk), who was 18 at the time. Reports vary on how long their marriage lasted, but some accounts say only a few days.

In addition to his multiple marriages and engagements, the rock star has been linked to several other people. In 2007, Lee was rumored to be dating Rod Stewart’s daughter, Kimberly Stewart, 42. The two reportedly saw each other for a few months and were seen kissing, though they didn’t publicly admit they were in a relationship.

Another famous celeb Lee supposedly dated was Tara Reid (American Pie), 46, in 2005. In a 2020 Jezebel interview, Reid denied the rumors, saying, “Never, never, never, never. It’s so funny.” She continued, “He was, like, my next-door neighbor. Sometimes I’d go out with him. He’s such a nice guy. We would laugh at it. You know what it is? When two famous people hang out, everyone thinks they’re dating. It’s not true.”

A year prior, in 2004, Lee was briefly rumored to be dating supermodel Naomi Campbell, 51. Her reps denied the pairing to Page Six.

In 2003, Lee was linked to singer Pink, 42, but the relationship wasn’t confirmed until a year later, when Anderson appeared on The Howard Stern Show. When she was asked about whether he was “having sex” with the “Just Give Me A Reason” singer, she responded with, “Oh yeah, absolutely.” When asked if they were still together, Anderson replied, “I don’t know who dumped who,” before adding, “They’re not together.”

From 2001 to 2003, Lee dated Prince’s ex-wife, dancer Mayte Garcia, 48, and even got engaged to her. According to the Daily Mail, they split before the wedding because she supposedly didn’t feel like he was over Anderson.