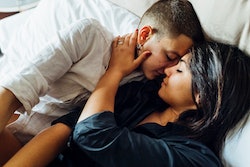 Fire and water are natural opposites, so you wouldn't think that a fire sign like Aries and a water sign like Cancer would go well together. After all, Aries zodiac signs are spontaneous, adventurous, and driven by their ambitions and desires, while Cancers are nurturing, emotional, and all about home and family. They're completely different in many ways, and yet these two actually have a lot going for them. Aries and Cancer's zodiac compatibility will give you insight into why this relationship has the potential to go far.

"The Aries and Cancer relationship is equal parts goal-directed and saucy lovefest," Dana DeFranco, astrologer and co-host of the Allegedly Astrology podcast, tells Bustle. "They understand each other on a level so deep that it occasionally causes friction but also pulls them in further down the spiral of wet, hot love."

In the zodiac wheel, planetary aspects are a huge indicator of compatibility. Aries and Cancer form a square aspect of each other, which is an angle that "creates tension and forces action." According to DeFranco, squares get a bad rap for being difficult because they're "hard aspects" that occur between elementally incompatible signs. However, squares also consist of two signs of the same modality, which represents how a sign expresses their energy and how they approach life. Aries and Cancer are both cardinal signs, which makes them "instigators of action." So, despite their differences, they'll understand each other in a way that no other signs can. Read on to learn more about Aries and Cancer’s compatibility in relationships, friendship, and dating.

One of the best things about a square aspect is the sexual tension it creates. "The sexual tension between Aries and Cancer is so palpable that it almost sounds vulgar to describe its inherent innocence and simplicity," DeFranco says. "But to put it plainly, Aries is hot, and Cancer is wet.” And what do you get when you combine fire and water? Steam. Steamy, steamy, passionate steam. “This tension is what keeps Aries driven to break down the seemingly insurmountable fortresses that Cancer builds around their tender hearts,” DeFranco says. “Once Aries achieves this, they win Cancer’s trust and dedication forever."

Forming an emotional connection can be a bit of a struggle for these two at first. According to astrologer Elisa Robyn, Ph.D., Cancers are one of the most deeply feeling signs in the zodiac, while Aries can sometimes be "emotionally challenged." It's not that Aries doesn't care or can’t feel things deeply. Because they're a Mars-ruled sign, they can easily express passion, enthusiasm, and aggression. They just don't like showing their softer side too often. But if Aries and Cancer can learn to open up and be vulnerable with each other, there's potential for a deeper emotional bond.

Because the two signs share a modality, they look at life in similar ways. Cardinal signs, like Cancer and Aries, are the natural leaders of the zodiac. They’re the initiators and pathfinders, Lee tells Bustle. “They are in this lifetime to build something grand and want membership in it.” Aries and Cancer want the same things out of life; they just have a completely different way of going about it. “These two signs square in the zodiac, which means they form a 90-degree angle,” Lee says. “When signs square, they create conflict and friction. Basically, they butt heads when trying to relate to one another.” However, this square aspect isn’t only good for creating sexual tension and problems. According to Lee, squared signs actually tend to be more motivated to work through their problems. “There is a strong presence of willpower that exists in the relationship,” they explain.

Cancer and Aries are also two of the more emotionally reactive and impulsive signs of the zodiac. “Aries tends to be impulsive with their fight and flight, [and] Cancer tends to be impulsive with their heart and feelings,” Lee says. “Cancer needs to validate Aries’ right to be vulnerable, and Aries needs to validate Cancer’s ability to be courageous and protective of what belongs to them.”

When it comes to communication, Aries and Cancer may need to adjust to each other’s styles. According to Inbaal Honigman, celebrity psychic and astrologer, Aries is very extroverted while Cancer is introverted and calm. Aries also has a me-first approach in relationships, while Cancer is very selfless and nurturing. “Those two could struggle to maintain an equal relationship,” Honigman says. “The Aries will always get to decide what they watch and where they go.” It’s important for Cancer to be OK with speaking up about their needs or else Aries will never know there’s an imbalance in the relationship.

In addition to this, Aries is known for being direct in the way they speak. Sometimes, they may accidentally say things that offend their more sensitive Cancer partner. Crabs tend to take things personally and will likely shut Aries out, which will only leave the ram feeling frustrated. “Between the famous Cancerian sensitivity and the Aries infamous insensitivity, this relationship may hit the rocks fast,” Honigman says. If they can find a way to be understanding of how each other expresses themselves, they should have good communication in their relationship.

As friends, Aries and Cancer will get along right away. In fact, Honigman says these two really enjoy being around each other. “Aries knows all the hottest parties, and Cancer knows how to stay safe all night,” she says. “If they stick together, they could have some organized fun!”

Their needs in a friendship seem to match each other really well too. According to Honigman, Cancer is a sensitive water sign who’ll need alone time every now and then. Since Aries is independent and is usually in several groups or clubs, they’ll be fine with Cancer doing their own thing if needed. Overall, it’ll be a supportive friendship that works for both signs.

The Biggest Potential Problem Area In An Aries And Cancer Relationship

For a fire and water sign couple, these two can get along pretty well. However, it’s hard to say that a Cancer will definitely be an Aries’ soulmate, as their intellectual compatibility could be an issue. "Neither sign is more intelligent than the other, but they value different ways of thinking and communicating," Robyn says. "The strategic-focused Aries will wonder why emotions matter in a plan, while the feeling-focused Cancer will wonder why the Aries is so cold-hearted."

“The biggest issue for Aries and Cancer is communication,” says Lee. Aries can be blunt and direct, and this can be off-putting for a sensitive soul like Cancer, who tends to take things personally. And because Aries is a Mars-ruled fire sign, “they tend to act more than they communicate,” Lee says, adding that Aries really doesn’t think too heavily before speaking. Cancer, on the other hand, also struggles in the communication department — but in a different way “Cancer is a water sign ruled by the moon, and in ancient astrology, they are listed as a ‘mute’ sign, which means they aren’t communicatively forward at all,” says Lee. As we know, healthy communication is in a relationship is a big indicator of its success. While Cancer struggles to express what they want and need in a relationship, Aries can become frustrated and feel like they are in the dark. Although it's not a huge dealbreaker for either sign, it’ll need to be worked through in order for a partnership to thrive.

There's also the potential for trust issues in this relationship. Cancer zodiac signs value comfort, security, and loyalty. Although they love the excitement Aries brings to their life, the ram's impulsive nature can give the crab some doubts. “Aries being experience-hungry can also make Cancer nervous because they tend to be homebodies,” says Lee. “This can mean Aries is always on the go, which can leave Cancer to themselves and possibly stir into trust issues.” According to DeFranco, Cancer may be tempted to test Aries' loyalty, which won't sit right with their partner. Even if Aries has a reputation for jumping from one thing to the next, they are extremely loyal to the people they care about.

Are Aries And Cancer A Good Match?

Despite their share of challenges, Aries and Cancer have "unending potential" for lasting love as long as they're willing to put their fears aside and open up. "These two signs are goal-oriented and have the passion and flow to keep each other hooked for eternity and beyond," DeFranco says. "They are as capable of moving mountains as they are of growing family trees, but they must always be willing to surrender to divine love."

Tess Lee, professional astrologer and digital creator in the horoscope and astrology spaces

This article was originally published on March 5, 2021