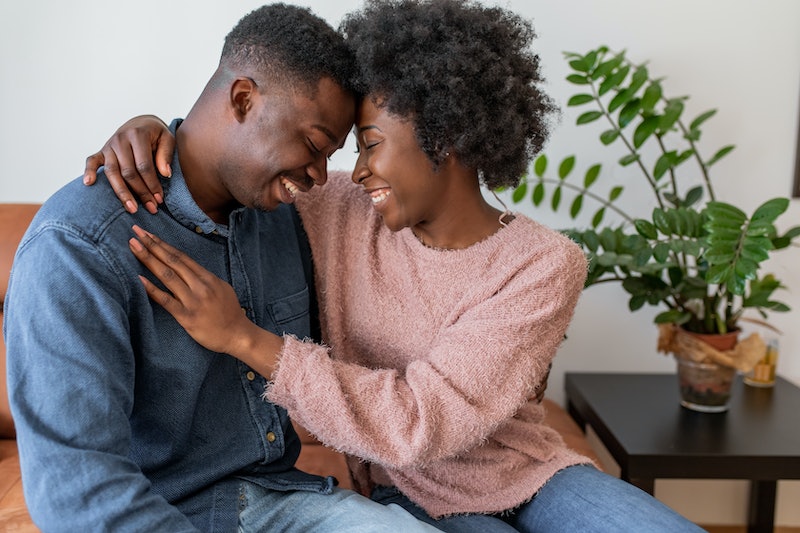 When the fiery Aries meets the airy Libra, it’s a classic case of opposites attracting. Logically, dating someone who’s your polar opposite shouldn’t work. Once the initial excitement wears off, having too many differences may prove to be more challenging than it’s worth. But in astrology, opposite sign couples tend to make some of the best matches. Aries and Libra’s zodiac compatibility will tell you everything you need to know about this fire and air sign couple.

“Opposing Sun signs are typically considered a natural match in astrology,” Leslie Hale, an astrologer with Keen.com, tells Bustle. “Aries and Libra have the potential to be great together as Venus rules Libra, the planet of love, and Aries is ruled by Mars, the planet connected to sex, passions, and desires. With this combination of Venus and Mars, the two planets of love and attraction are at constant play.”

As with all opposite sign pairings, these two will be immediately drawn towards each other. Libra’s beauty, grace, and charm will be extremely attractive to the ram, who will want nothing more than to get close to them. On the other hand, Aries’s confidence, strong presence, and determination will capture Libra’s attention. The early stages of dating will be a fun ride for both as Libras love to tease and flirt, while Aries enjoys the chase. Aries will pull out all the stops to win over Libra’s heart, and Libra will reward them for all their efforts.

Sexually, these two are highly compatible. Their sexual compatibility is much greater than other opposite sign couples due to the influence of their ruling planets, Mars and Venus. According to Kristina Semos, astrologer and owner of AstroOils, there are clear “roles” in this pairing. “With Aries taking the lead, and Libra taking on more of the ‘feminine’ energy, regardless of actual gender, this tends to work,” Semos says. If they share a deeper emotional connection, they can have a sexually satisfying relationship that lasts indefinitely.

Emotionally, these two are very different. According to Semos, Aries is the more straightforward, aggressive, and brash-type. At the same time, Libra is diplomatic, open-minded to the point of being indecisive, and just wants everybody to get along. “Libra might be horrified or embarrassed by how Aries said something bold and offensive to the waiter (or their friend, or her uncle), while Aries might be annoyed at how Libra can't make up their mind,” Semos says. They may differ in the ways they communicate and express their feelings. However, they each need a little bit of what the other has.

Naturally, being dating your opposite comes with its share of issues. For Aries and Libra, a potential problem area is the way that they approach relationships. For instance, Aries rules the first house of the self in the zodiac, which is all about personal identity. Libra, on the other hand, rules the seventh house of partnerships, cooperation, and commitment. “If Aries never compromises on what they want, and Libra is too concerned about what their partner wants, this is a big pitfall,” Semos says. Both partners need to learn how to compromise and establish proper boundaries to have a balanced and equal partnership.

One of the best parts about being in an opposite sign pairing is the growth potential. According to Hale, the somewhat reserved Libra can learn to be more open and direct with their feelings, while Aries can look at things from their partner’s perspective. If they’re committed to making a relationship work, this couple can go the distance.

“Through the opposition, they can find balance, with each providing the other the things they are lacking,” Hale says. “If nothing else in the chart is unfavorable, this can be a match of a lifetime.”