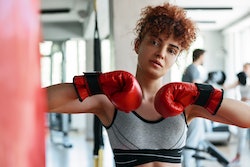 Every zodiac sign possesses a unique set of powers that set them apart from the rest. When it comes to the leader of the zodiac, Aries, some of their most recognizable strengths include their unwavering confidence and willingness to win. They’re gutsy, competitive, and down to try anything once, which is how they got their bold reputation — but these dynamic fire signs have a few special tricks up their sleeves that aren’t as obvious. Not only will unraveling Aries’ hidden powers give you an extensive look into the ram’s potential, but it can also spark confidence in your ability to take charge.

Before diving into their lesser-known strengths, it helps to know some of the basic elements of Aries to get the full picture. Aries are cardinal signs, meaning they spearhead any project or initiative they have their heart set on — when they have a vision, they roll with it. Since they’re fire signs, they’re passionate, ambitious, and boast otherworldly confidence. Their ruling planet, Mars, rules everything related to impulses, drive, and aggression, making Aries the perfect warrior to have in your corner.

Aries zodiac signs are honest and direct, so they have no issue challenging you or speaking up for what they believe in. That’s why, on the surface, it may seem like you have them totally figured out. But a deeper look into their strengths proves there’s more than what meets the eye. Keep reading to find out the hidden superpowers of Aries zodiac signs.

As the zodiac sign is associated with action and impulses, Aries zodiac signs don’t exactly take their time. In fact, their impetuous nature allows them to act quickly on their feet at maximum speed. According to astrologer Annabel Gat, VICE’s senior astrologer and author of The Moon Sign Guide, the brazen Aries is a cardinal sign, which means they kick off the beginning of a season, so their pace is spearheaded by their need to be first.

“Never underestimate an Aries’s eye for value,” Gat tells Bustle. “As a Cardinal sign and the first sign of the zodiac, they tend to be ‘first’ at things, and as they gain experience, this quick-moving fire sign gets very good at figuring out what’s a waste of their energy and what’s worth their investment, what will bring the best pay off or best value.”

Aries is represented by the first house of identity. Because they’re tied so closely with the self, they’re typically self-reliant — and that extends to their self-soothing powers. Their I’ll-do-it-myself mentality gives them the unique strength to look within themselves for support. For example, when these signs go through a breakup, they’ll immediately hit the gym or do a 180 in their career before they download dating apps to feel like themselves again.

“Aries take initiative and don’t wait around for a prompt from someone else — if they want something, they go for it! If they don’t know how to get what they want, they make moves to figure it out,” explains Gat. Their go-getter attitude and independent mindset allow the fire sign to be almost entirely self-sufficient, refusing to rely on another because “waiting around for something to happen doesn’t suit an Aries,” Gat says.

There’s little that can scare an Aries, especially given their fire sign status, which is associated with action and courage. But it’s a mix of their element and their ruling planet, Mars, that gives them the guts to go after what they want, stand up for themselves and others, and tell the truth even if it’s hard to. “Aries is a fighter, but also a lover, and in love, they will fight on behalf of the person they care for, being their advocate when they’re in need,” Gat explains.

As a fire sign, Aries always has their eye on the prize and will train until they’re strong enough to get it. That’s because Mars is responsible for the physical realm like aggression, so that combined with their dedication and passion lends Aries their immeasurable strength.

“When Aries has something tough they have to do, they’re great at pumping themselves up: their inner dialog is like a coach giving a pep talk, telling them they can do it!” says Gat.

More like this
Eleven From ‘Stranger Things’ Is A Cancer Zodiac Sign, An Astrologer Says
By Brittany Beringer
Are Gemini & Sagittarius Compatible In A Relationship?
By Kristine Fellizar
Here’s Your Fourth Of July Weekend Horoscope
By Mecca Woods
Your Guide To Earth Signs
By Nina Kahn
Get Even More From Bustle — Sign Up For The Newsletter