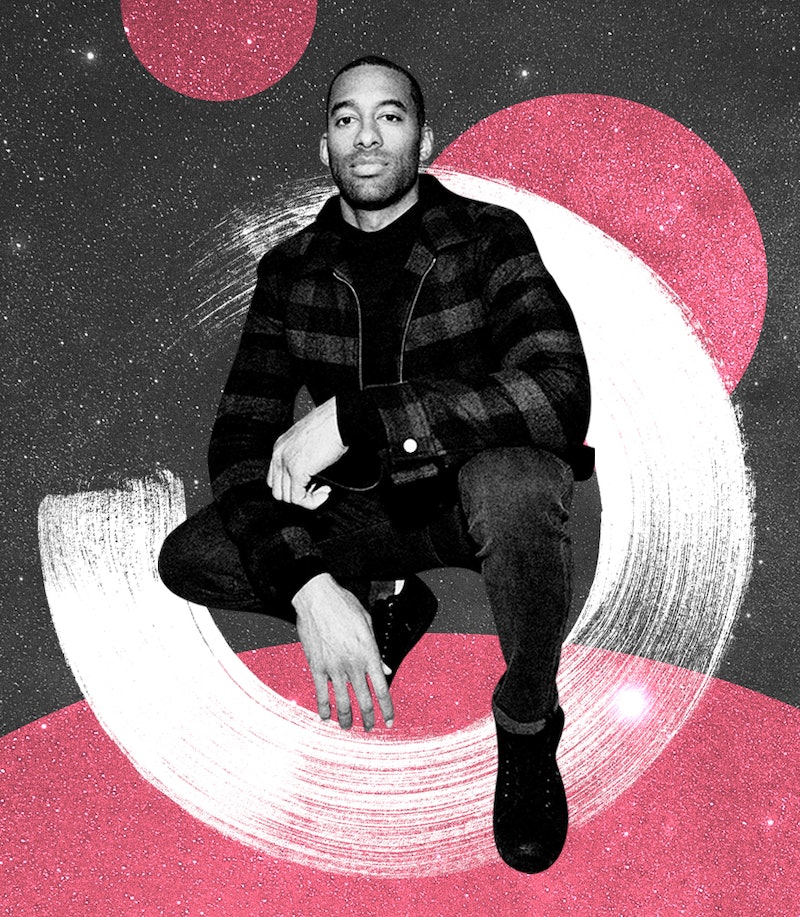 When you think of The Bachelor, drama, heartbreak, hookups, and more drama probably come to mind. According to the astrology of the new Bachelor, who's season premieres on ABC Jan. 4, you can likely expect all of the above and then some. Matt James, the newest Bachelor is a handsome 29-year-old Sagittarius who's looking for long-lasting love on the show.

In a recent trailer for season 25 of The Bachelor, James makes a toast to falling in love, but also admits that it's something he's never experienced. However, James' astrology points to the fact that he's in the middle of a significant growth period and is overcoming obstacles in love — and also gives us a cosmic peek into the type of partner he needs to build a relationship that can survive the ups and downs. Whether he finds love or not remains to be seen, so we looked at Matt James of The Bachelor's birth chart to see what the stars can reveal.

We don't have James' exact birth time, which means we don't know his rising sign and can't see which houses in his birth chart the planets fall into. However, we're still able to take a deep and thorough dive into all of his planetary placements simply by using his birth date and location, as well the key relationships between the planets that work together to create his unique cosmic profile.

James (born Dec. 5, 1991) is a fiery and spontaneous Sagittarius. He actually has a whopping four major planets in astrology — including the sun, the moon, Mercury, and Mars — clustered together in this sign. This imbues James with amplified Sagittarian qualities in the way he expresses himself, chases his goals, and even feels his emotions. "Sagittarians are bold adventure-seekers who operate in an independent manner, so whoever James decides to partner up with will need to be able to understand how important it is for him to embrace a flexible and adaptable lifestyle," astrologer Leona Moon tells Bustle.

Having so many influential personality planets in mutable fire sign Sagittarius makes James a free spirit who may be hesitant to settle down. Sagittarians are known to get bored easily, so having a partner who can keep things exciting and spontaneous in love is a must. "Routine can exist, as long as there's room to change the plan down the line," Moon says of James' dating style. She adds that he won't thrive in a relationship with someone who has jealous or controlling tendencies.

James is also hitting a major astrological milestone as we speak, as his Saturn return period kicked off in 2020, meaning that he's entered a period of tough life lessons and growing pains. Saturn returns are turbulent years in our late twenties during which strict planet Saturn teaches us maturity and responsibility. James will likely be experiencing a lot of upheaval over the next couple years because of this, so he may not have the clearest idea of what he wants right now — and what he wants might be changing day by day.

Venus In Libra Makes A Romantic At Heart

As a quadruple Sagittarius, James' thrill-seeking energy thrives on the excitement of new experiences and spontaneity, so it's important that he finds a partner who can keep up. This constant need for growth and stimulation could astrologically explain why he's hasn't yet settled down. After all, falling in love takes patience, and with his planet of motivation, Mars, in wild Sagittarius, patience doesn't come easily. With communication planet Mercury in Sagittarius, too, James is one to speak his truth and isn't afraid to be blunt about what he wants — which could be hard to handle for someone who's super sensitive or passive.

However, his freedom-loving Sagittarius placements don't necessarily indicate that he'll be a perpetual bachelor. That's thanks to his romantic and partnerships-oriented Venus in Libra, which gives him a swoony romantic side. Venus is the planet of love and Libra is the sign that rules over relationships, meaning James values balance, romance, and mutual respect in relationships. "This energy on its own can signify someone who appreciates a partner with a thirst for social events, a quick mind, and someone who can offer intellectual stimulation," says Moon. James could find deep value in a partnership, so long as he gives the rose to someone who can keep up with his excitement-filled lifestyle.

Will Matt James Find True Love On The Bachelor?

While James may be a charming romantic at heart, his astrological birth chart shows he'll likely need to face some personal obstacles before being able to make a long-term relationship work. "His Venus forms a tough connection with Saturn, the planet of restriction," Moon says. "This can signify that James will need to embrace more of his vulnerability to truly find a partner with long-lasting potential — it will require him to quit self-criticizing and go out of his comfort zone."

Given the personal upheaval of his Saturn return period, as well as the struggle of having love planet Venus square off with Saturn in his chart, it's possible that James' emotional journey on the show helped him access his vulnerable side, as the Bachelor preview that dropped on Dec. 9 shows a tearful James looking very much full of feelings.

Only time will tell who gets his final rose, but whoever it is will need to be equality-minded, fair, and willing to give season 25's bachelor lots of room to do his own thing in order to make this love work. "There will need to be mutual trust," says Moon of James' ideal romantic situation. "His love grows when others' respect his space and freedom."

More like this
Here's Our Ranking Of The Funniest 'Bachelor' Casting Ad One-Liners So Far
By Grace Wehniainen
Former 'Bachelor' Producer Elan Gale Knows The Secret To Your Favorite Shows
By Samantha Rollins
Where Is Clayton Echard Now? The Former 'Bachelor' Star Is Dating Susie Evans
By Kadin Burnett
Memes & Tweets About Logan Switching From Rachel To Gabby On 'The Bachelorette'
By Grace Wehniainen
Get Even More From Bustle — Sign Up For The Newsletter