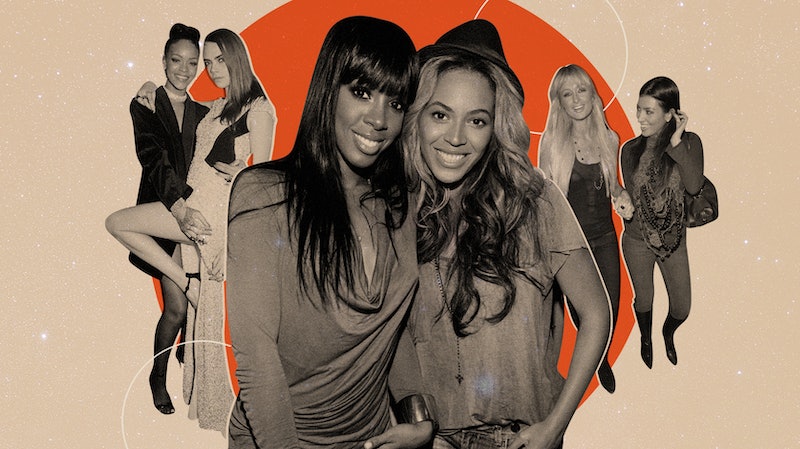 Astrology can offer us insight into our social lives and relationships, so it’s fun check out which zodiac signs are compatible in friendships. And we can learn a lot by looking at the cosmic connections between some of Hollywood's most dynamic BFF duos, too. The astrological compatibility of celebrity best friends can tell us how these pairs vibe, what can lead to drama between them, and why they've stuck together through thick and thin.

But reading celebrity best friend astrology charts involves more than just matching up two zodiac signs. If we want to see what's really going on beneath the surface, it's important to examine the connection between some of the other planets in our birth charts, too — such as the moon (planet of emotions) and Venus (planet of values).

"Venus governs what and who we like, so friendships will often enjoy harmonious ties that involve this planet," astrologer Kimberly Peta Dewhirst of Star Sign Style tells Bustle. "The Moon indicates the way we seek and find comfort." A compatible vibe between two people's Venus signs can add pleasure, fun, and affection to a friendship, while a kinship between moon signs can make the friendship feel comfortable, safe, and natural.

Bustle chatted with several pop culture astrologers to get the astrological compatibility of famous celebrity friendships. Read on for the planetary scoop on their ride-or-die connections.

Taylor is a shoot-for-the-stars Sagittarius, but she has a gentle Cancer Moon, which gives her a deep emotional side. This makes her an ideal friend to fellow pop queen Selena, who is an introspective Cancer. "Taylor's Moon in comfort-driven Cancer ... compliments Selena's Cancer Sun," Dewhirst says. "But more importantly, the two celebrities also have a generous dose of fire."

Selena's Venus sign is fiery Leo, which combined with Taylor's Sagittarius energy brings tons of excitement to this friendship. "They are very different," Dewhirst says, "but it's likely there's enough commonality and juxtoposition for it to be interesting and fun."

On the surface, Virgo and Aquarius aren't the most compatible, so the reason these two former Destiny's Child stars have remained so close through the decades is likely thanks to Venus and the Moon. "Beyoncé's Venus sign compliments Kelly's, as they're both in air signs," Dewhirst says. This means both singers value similar qualities in their friendships.

Dewhirst also notes a lucky planetary connection between Beyoncé's Sun and Kelly's Moon, which makes Kelly "a great and supportive friend who can agreeably go along with Bey's perfectionist tendencies."

They played friends on Friends, but Jennifer and Courtney's connection off-screen is just as major. "They are both air signs that naturally understand one another's needs," astrologer Leona Moon tells Bustle. "Aquarius and Gemini have overlapping values, so they'll be respectful of each other's space and won't jump to conclusions if the other cancels plans." The air sign energy between them also contributes to their strong comedic chemistry, as they're both witty and quick-thinking — making it easy to riff off of each other's senses of humor and land jokes.

Oprah described her best friend Gayle as being "the mother, the sister, the friend in one person," when introducing her at "Oprah Winfrey's 2020 Vision: Your Life in Focus Tour" in Denver earlier this year, according to CNN — and that relationship has transcended into a professional partnership, too. "Their friendship is a wonderful pairing because they share an intrinsic understanding about life and an easy way of relating," astrologer Kyle Thomas tells Bustle. Their professional partnership was only natural, too, as Oprah is a visionary Aquarius, full of innovative ideas, while Gayle is a pragmatic and hardworking Capricorn, who brings a grounded focus to Oprah's creativity.

Brad and George are longtime friends and costars, and their brotherly chemistry is palpable on and off screen. "Initially, you’d find that Sagittarius and Taurus are not the most congruent zodiac signs," Thomas says. But they share a Moon sign in Capricorn, which changes the game. Thomas notes that this indicates these two usually "just get each other," and share a lot of creative chemistry. "They like to laugh together, work together, and have fun together," Thomas says.

Pisces is a sensitive water sign while Leo is a gregarious fire sign, so these Valerian and the City of a Thousand Planets costars may not seem like the most compatible pair — but Rihanna actually has fire sign energy in her chart that creates sparks alongside Cara's flashy Leo Sun, giving them a passionate and fun connection. "Although Rihanna is a Pisces, she's wild at heart, with [three planets] in fire sign Aries," Dewhirst says.

They also share a connection to innovative air sign Aquarius, as Rihanna has Mercury (planet of communication) in Aquarius, while Cara was born just ahead of an Aquarius Full Moon — meaning their friendship goes way deeper than just attending A-list parties together. "This perfect blend of fire and air means the two share friendship and rapport, but also likely align on bigger humanitarian issues, too," Dewhirst says.

A Leo and Leo combo? No surprise here! These two fiery lionesses love the spotlight, but they are fabulous at supporting each other with positivity and lots of gassing up. "Lions travel in packs! No one else knows the depth and loyalty of a Leo's friendship like another Leo, and when two lady Leos team up, they're each other's greatest cheerleaders for life," Moon says.

The astrological connection between comedy queens Tina Fey and Amy Poehler makes for a deeply valuable bond. Taurus and Virgo are both earth signs, which makes this friendship a grounding and sensible force in each other's lives. "The best friendship between Tina and Amy is so easily seen within their natal charts," Thomas says. "Their connection is natural, supportive, and flows harmoniously... They work in alignment professionally and personally, and there is not a competitive nature between them."

There's nothing complicated about this pairing, because Matt and Ben's astrology shows that they click with total ease and are born to support each other in the spotlight. "Leo and Libra are two of the most compatible zodiac signs, because they both love to be social, extroverted, creative, and expressive," Thomas says.

Wild Sag doesn't seem like a match for a gentle Cancer, but these High School Musical alumni share a deep connection that allows them to bond and recharge together outside of the limelight. "While Vanessa's outgoing Sun in Sagittarius might make a more withdrawn Cancer [like Ashley] shudder, her Moon is in Pisces, a water sign, just like Ashley's Sun sign," Moon says. "When two people share a connection between their Sun and their Moon, there is an instant rapport."

These air sign sisters naturally understand each other and share an effortless connection, as they both view the world and communicate in similar ways — meaning they can likely text back and forth or gab on the phone until the wee hours of the night. "Like looking in a foggy, glamorous mirror, both Kim and Paris have their Sun [in] an air sign," Dewhirst says.

Aries is brash and headstrong while Pisces is soft and sensitive, so this duo could definitely clash, and as Dewhirst notes, their relationship is "not free from arguments." But their Moon signs form a beautiful exact trine aspect (which is when planets are at the same degree of signs of the same element), so this friendship feels like home. In Sophie and Maisie's case, their Moon sign trine takes place in the fire signs, making the connection fun and passionate. "Sophie has her Moon at 3º Aries, while Maisie's is at 3º Leo, so these two feel comfortable with each other, [making] for stellar dressing room downtime and selfies," Dewhirst says.

This dynamic duo's astrological compatibility shows why they're so gentle and compassionate with one another. "Cancer and Virgo are a beautiful and easy connection because these two elements — water and earth — blend together magnificently," Thomas says. "They're both loyal and sensitive, and want to connect from a nurturing and sentimental side. [They're] able to confide in each other."

This article was originally published on June 8, 2020