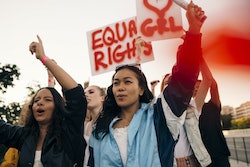 Your birth chart is a great way to understand your traits and motivations on a deeper level, which can come in handy when considering a career path that aligns with your zodiac sign. When it comes to unconventional Aquarius, the zodiac sign thrives best in an environment where they can support underserved communities or progress society in some way. That’s because the fixed air signs are passionate about doing away with traditions and signals a sign of change. The water bearer isn’t afraid to shake things up and question the status quo, either — they’re on a mission to make an impact on the greater good. Because of their affinity for the collective, the best career for Aquarius zodiac signs is a path that helps them help society — like a social activist, campaign organizer, or an elected official.

“Aquarius are free-thinkers, visionaries, and our biggest hope for humanity. Those ruled by Aquarius tend to have a purpose-filled life in serving people through their activism,” astrologer Imani Quinn tells Bustle. “Aquarius makes great social activists for movements and causes meant to uplift the marginalized.”

You sun sign doesn’t need to be an Aquarius to thrive in this environment. If your Mars sign is stationed in Aquarius, this applies to you, too. That’s because Mars rules over passion, aggression, and ambition — aka, how you approach your career. Those with an Aquarius Mars tend to be big-picture thinkers and aren’t afraid to break the rules if it means they fulfill their objective. If your rising sign, which represents how you show up for yourself and others, is in Aquarius, you will likely feel fulfilled in an environment that champions others as well. “You can also look at your tenth house to see how your work will manifest in this life depending on how you approach your work,” explains Quinn.

Aquarius is called the humanitarian of the zodiac for many reasons. They’re represented by the water bearer, which in Greek mythology, represents the source of life that feeds the collective and washes away conventions to make room for a different, more progressive future.

One of the strongest influences on Aquarius zodiac signs is their eleventh house ruler. The eleventh house deals with friendship, society, and community, which plays an integral role in Aquarius’ core values. Despite being an extremely independent sign, they’re actually considered one of the social signs because they belong to the air sign group, which is all about communication and relationships. The water bearer may feel fulfilled if their work is able to advocate for others and back up progressive change, in roles such as a political organizer or social activist. Plus, being a fixed sign who can concentrate and see things through, they have plenty of skills needed to organize, inspire, and rally others around them.

An Aquarian’s ability to see the bigger picture allows them the unique ability to stay focused, determined, and not lose sight of their objectives. “Many presidents of the United States have been Aquarius and those in political power whose mission it is to help and to serve our global collective,” says Quinn.

What’s more, Aquarius is ruled by Uranus, the planet associated with shock, disruption, and change. Uranus lends Aquarius the rebellious edge they need to address social issues and the audacity and grit to be part of a change. Their ability to see the big picture is enough to fuel their mission, making them fit for a role as an activist.

“[Aquarians] can look to their Uranus ruler as it highlights their interest in technology and innovation. Uranus marks the revolutionary energy that comes with being an activist and free world leader,” explains Quinn.

Whether it’s advocating for climate justice or fighting for marginalized groups, the water bearer is in their element when they can champion communities and make a sincere impact on the collective. “Aquarians naturally are going to be drawn to question how they can alleviate struggle in helping to shift global consciousness,” Quinn says. “Their interests lie within spirituality, humanity, and technology, which are all key elements in alleviating the challenges we face within our global society.”