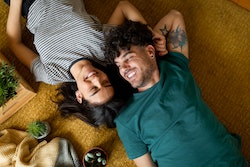 A relationship between two Cancer zodiac signs can sometimes feel like a soapy teen drama. There are tears, angst, and heavy emotions, mixed in with tenderness, affection, and sweet declarations of love. Cancers are, after all, highly sensitive water signs. Despite the dramatics, no one understands the depth of a crab’s emotions more than another crab. Cancer and Cancer compatibility shows why this pair of water signs have what it takes to go the distance.

As astrologer Kristina Semos tells Bustle, a Cancer-Cancer relationship is moody, emotional, nurturing, and comfortable. “Cancer is a highly intuitive, highly sensitive, and highly emotional sign that takes time to open up and trust,” Semos says. “When you get two Cancers in a long-term relationship, some things will match up amazingly well, especially intellectually and emotionally.”

A Cancer’s needs are fairly simple: They want to nurture and be nurtured. They want to make sure that their friends and family are always taken care of. They also want to live in a home that feels safe and cozy. That’s why Cancer and Cancer compatibility is pretty high. They share the same strong values in life, and want the same things.

“They may have differing interests as far as what they do for work or hobbies, but they’d respect the other enough to take it seriously,” Semos says.

In general, Cancers prefer having an emotional connection with their partner before getting physical. According to astrologer Mitzye Ramos Ribas, quality time, acts of service, and words of affirmation are all part of their love language. “As long as both partners feel appreciated, the sparks between the sheets should remain fiery,” Ribas says.

Cancers are naturally intuitive signs, so two Cancer signs in bed will be in tune to each other’s needs and emotional states. “They can read each other, so they know if something is going awry and can quickly soothe whatever is coming up,” Semos says. Above all, they’ll feel safe and comfortable with each other.

But since Cancers are givers by nature, it’s easier for them to do whatever their partner wants than express their own desires. Semos says Cancers may be so into giving that they’re not in tune to their own sexual needs. “This could create a sexual hiccup because neither can ‘take care of’ or ‘nurture’ their partner if their partner doesn't know what they want,” she says.

Two Cancers make a highly compatible pair emotionally, too. Despite how sensitive crabs are, they do have thick outer shells — it usually takes them a while to open up. But since two Cancers speak the same “emotional and intuitive language,” Semos says, it’s easy for them to trust each other. Cancers feel things deeply, and they’ll spend a lot of time talking about their feelings with each other. They’ll have no problem forming a deep bond.

“Like the waxing and waning moon that rules their zodiac sign, they both understand that emotions go in waves,” Semos says. When one partner is being moody or passive aggressive, the other won’t be completely put off by it. Instead, they’ll know to either give them space, comfort them, or ask their partner what they need.

One of the best aspects of this zodiac match is how in sync they can be. According to Ribas, there’s a “deep telepathic ability” between these two. They’re the type of couple who can sit in silence together and feel fully comfortable and relaxed. Cancers take love seriously and typically date with the intention of finding their soulmate, so when these two find each other, they won’t let go.

Not only do two Cancer zodiac signs make a good sexual and emotional match, communication is also pretty easy between the two. According to professional astrologer Frederic Hoffmann, Cancer and Cancer communicate well because they’re naturally kind, sensitive, caring, and compassionate, which will help them solve small problems quickly. “Their deep intuition and mothering personalities can also help them communicate without going into more significant conflicts,” Hoffman says.

These two won’t shy away from showing affection or sharing their deeper feelings, which will make them feel secure in the relationship. Since they’re both sensitive and emotional, they’ll be understanding when the other is in a mood.

The only thing that could become a problem is Cancer’s passive-aggressiveness. As astrologer Kyle Thomas previously told Bustle, Cancers can be very defensive. “When threatened or upset, they retreat to their shell rather than facing a conflict head-on,” he said. “Like a crab, Cancers approach confrontation from the side.” Cancers can hold a grudge forever: If one partner isn’t willing to step up, apologize, or start a conversation about what’s wrong, these two can be in an argument that lasts a good while.

Cancer and Cancer compatibility in terms of dating is “definitely a mood,” says Stina Garbis, professional astrologer and psychic. “These signs, ruled by the moon, change their mood every other day, so this relationship may be varied and a little rocky at times,” she says. “However, this duo is no stranger to experiencing the ups and downs of life. So they may be willing to weather many storms together.”

Since they are the same zodiac sign, there’s a natural pull towards each other. According to Garbis, it could go either way when they first meet. Some couples may feel like they’ve finally found their other half, while some couples will instantly dislike each other without knowing exactly why. That’s what tends to happen when you’re dating someone with the same zodiac sign. “If anything, this couple is a mirror image of each other, reflecting both the good and the bad,” Garbis says.

Once they decide they want to be together, they’re in it for life — and will do anything to make their relationship work.

Cancers love taking care of their friends, so these two will always make sure the other is doing OK. You can find them catching up on a Friday night over a bottle of wine at one of their homes, while the rest of their friends are out and about. Since they share the same sign, Garbis says they’re pretty intuitive and just seem to know know what the other is thinking. They’re very loyal, caring, and will always have each other’s back no matter what.

Although these two will be naturally drawn towards each other, they’ll form a bond through their shared dislike of certain things or people. “It may be hard to be in the same room with two Cancer friends, as they’re likely complaining or gossiping about one thing or the other,” Garbis says. “They both are strong communicators and will definitely let their feelings be known.” Cancers are on the pessimistic side and may need a third party to come in and help them see they don’t have to complain about every little thing.

While these two will be understanding around each other’s behaviors, moodiness is one of the biggest issues in a Cancer-Cancer relationship. If one partner is being extra crabby, it can easily bring the other down. “A lot of their time (and libido) could be exhausted by their intense mood swings, especially if they're out of sync with each other,” Semos says.

Cancers are also known for being passive-aggressive. If both partners retreat into their shells and give each other the silent treatment, it can take a while for them to work out problems. And, if they aren’t being direct about their issues as they come, there’s a good chance resentment will build in the relationship as Cancers tend to hold grudges.

Are Cancer & Cancer A Good Match?

Overall, two Cancer zodiac signs together is a soulmate relationship. They’re comfortable with each other, they understand each other, and they generally want the same things in life. Managing their moods and talking through issues as they come are going to be important. But if they can do that, astrologers say they have what it takes to make their relationship last.