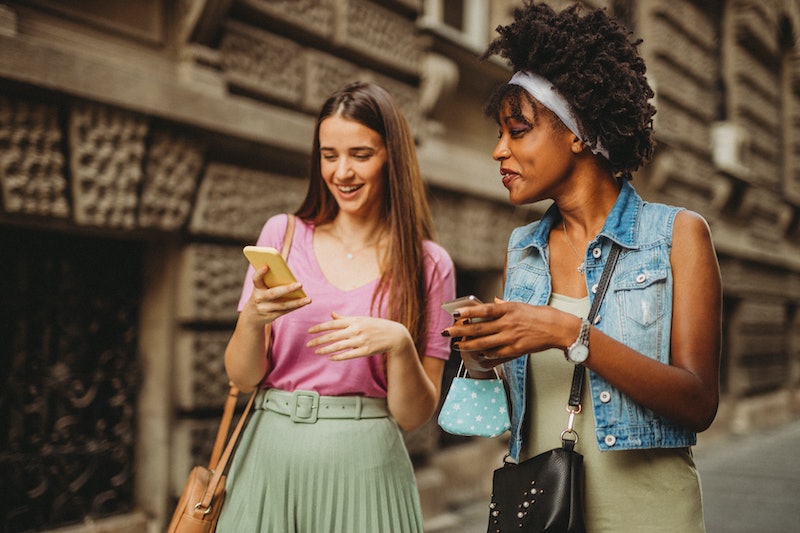 If you’ve yet to dive into the world of Instagram Reels, which first launched in summer 2020, it may be time to give them a try. Not only are they fun to watch — the same way your friends’ Instagram Stories are fun to watch — they’re also perfect if you want to promote a brand, connect with followers, and/or get a little more creative. The first step that can help you use the app’s function? Learning how to search for Reels on Instagram.

You may have come across these videos on your feed already — they show up when you click on the center button at the bottom of your screen. From there, you’re able to scroll through all sorts of animations from other creators, just like you would on TikTok. Or you can hop on your Feed to watch Reels from people you already follow.

Of course, sometimes you just want to watch videos about, say, applying lip liner or puppies playing with kittens. So, if you want to find Reels under a certain name or hashtag (like #puppiesplayingwithkittens), tap the audio name or hashtag that’s at the bottom of the video and you’ll be taken to other posts using the same audio/hashtag. Then, if you want to use this audio for your own Reel, tap “Use Audio,” or create an original sound. You can also search for tags in the search bar at the top.

To make your own Reel, cast your eyes upon the little plus sign symbol at the top of your phone, which will take you to various options, like Post, Story, Reels, and Live. Go to Reels (obviously) and do your thing. Pretty simple, right? Now let’s talk about what you can do with Instagram Reels and why they’re so handy.

According to Rachael Kester, director of social media and community at the virtual fitness studio bande, Reels can definitely add a little something extra to your usual posts.

“With all social media platforms really giving preference to video content, people use Reels to show creative content in a really fun way,” she tells Bustle. “Many consumers are feeling bored and limited by still, in-feed pictures, and Reels allow for variability.” Kester says it also seems like Instagram prioritizes Reels when sharing content with new audiences, which is perfect if you’re trying to expand a brand or get noticed.

Photo posts used to be your best bet to get discovered on the social media app, but Kester notes the algorithm has changed. “It was once easy to be discovered through an in-feed post, but with the removal of the chronological timeline, changes in hashtags, and an emphasis on the algorithm, it is more difficult to be seen on the platform,” she says. “When social media sites launch new features, they tend to favor creators who are utilizing these features. That said, Reels are a fantastic way to see and be seen.” So if exposure is your goal, go with video content creation.

It seems so simple, and yet one of the most important things you can do when uploading a Reel is to make sure you have the “Also Share To Feed” option turned on. “Instagram wants users to be putting their reels on their profiles, so they will actually boost your Reel to be seen by more people,” Ceara Kirkpatrick, a full-time content creator and freelance social media manager, tells Bustle.

Once it’s uploaded you can remove it immediately by clicking “Remove from Profile Grid” and still get the boosted post. “But the best practice is to leave it on your profile grid for 24 hours and then remove it,” Kirkpatrick says. “The Reel will still live under your ‘Reels’ section on your profile,” she explains, but it won’t clutter up your feed if you don’t want it to.

Of course, it always helps to post really great content, too. “Reels don’t have to take forever to produce, but they do need to be catchy,” Kester says. So make sure yours are original, fun, and if possible, use popular audio so that more people will see them. To get ideas, scroll through creators who are similar to you and see what they’ve been posting.

This is where you get to be creative, edit your videos, and have fun with them. But don’t put too much pressure on yourself to be unique every single time. Kester says even mundane things, like cleaning your apartment or cooking dinner, accompanied by tips and tricks, can make for great content. (Who knew?)

It’s All About Hashtags

As with everything on social media, don’t forget to add lots of hashtags. “Hashtags are still very important and Reels do pop up when you are exploring different hashtags,” Kester says. She recommends adding five to 10 hashtags at the end of the caption on your Reel (not in the video itself).

You might also want to include a teaser in your Instagram Stories, aka a short video calling attention to your Reel creation. If you do, Elena Duque, a beauty expert and influencer, suggests covering any text in your story with a big sticker and directing your audience to ‘tap on the Reel’ to watch it in its entirety.

Pro tip? “You don’t want to give it all away in the Stories,” she tells Bustle. “You want to entice them.” So, if you want to start using Instagram Reels, it’s fairly easy to do — and tends to have a big payoff.