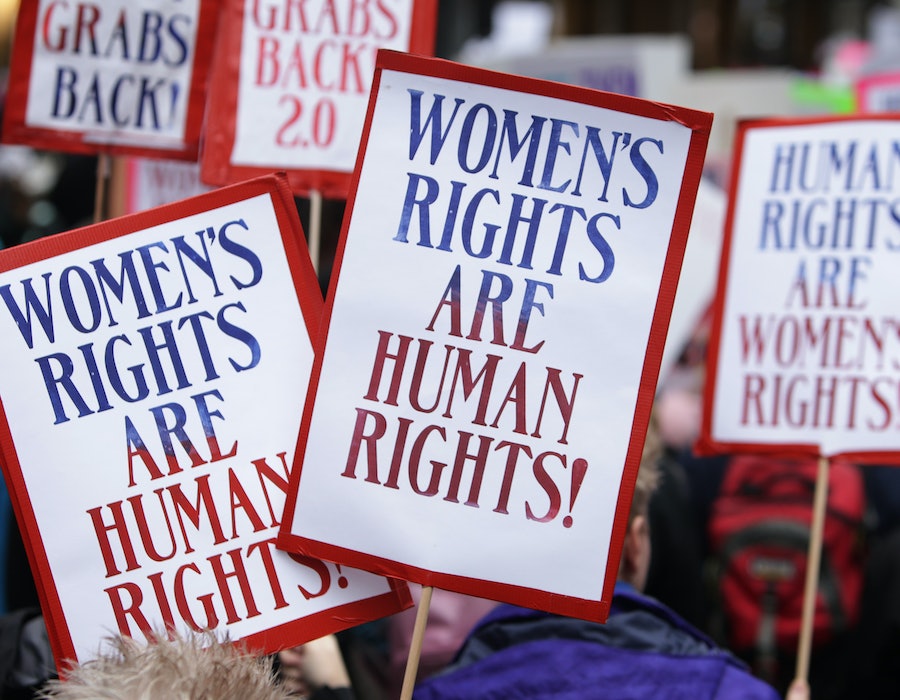 During March, the U.S. celebrates National Women’s History Month for a whole 31 days. However, March 8, specifically, marks a global observance of women worldwide with International Women's Day. First introduced over a century ago, the holiday is now recognized by countries all over the world as it commemorates the political, cultural, and socioeconomic achievements of women everywhere and puts the spotlight on gender-related issues spanning from the wage gap and trans rights to violence and abuse against women and reproductive rights. So, to kickstart your celebration of this feminist holiday, it’s times to brush up on some International Women's Day facts.

Here are 25 International Women's Day facts to brush up on and share with friends and family as a reminder of the past, present, and future of women’s rights and issues.

1. International Women's Day (IWD) was born on March 8, 1908 when 15,000 women marched through the streets of New York City to demand shorter hours, better pay, and the right to vote. The first IWD event wasn't held until 1911, and only then in Austria, Denmark, Germany, and Switzerland. The UN didn't recognize it as a holiday until 1975.

2. It wasn't until 2011 — to honor the centennial of the first International Women's Day event — that President Barack Obama declared the entire month of March "Women's History Month" in the United States.

3. Globally, women only make 77 cents for every dollar earned by men, which equates to getting paid 23% less than men, according to the UN. At this rate of progress, there won’t be equal pay until 2069.

5. This probably comes as no surprise, but women still spend more time on housework and childcare than men do. Data from the Bureau of Labor Statistics American Time Use Survey found that women aged 15 and older spend 5.7 hours daily doing housework chores, as well as looking after kids and elders, while men in the same age range do so for 3.6 hours each day.

6. There are only 26 women serving as heads of state or government out of Earth’s 195 countries, as of September 2021.

7. As reported by the National Student Clearinghouse Research Center, roughly 60% of enrollment in U.S. universities and colleges is comprised of women, while men make up around 40% — the biggest gender enrollment gap in history. However, 50 years ago, these proportions were reversed.

9. In 2021, New Zealand’s Laurel Hubbard became the first openly trans woman to compete at the Olympics, taking part in weightlifting at the 2020 Summer Olympics in Tokyo.

10. Despite the UN's Declaration on the Elimination of Violence Against Women back in 1993, currently, one in three women worldwide are victims of physical or sexual violence — that’s an estimated 736 million women. Estimates published by WHO indicate that globally almost one third (27%) of women aged 15 to 49 years who have been in a relationship report that they have experienced some form of physical or sexual violence at the hands of their intimate partner.

11. Transgender women are over four times more likely than cisgender women to be victims of violent crime, according to a 2021 study by the Williams Institute at UCLA School of Law. In addition, one in four transgender women who were victimized thought the incident was a hate crime, compared to fewer than one in 10 cisgender women.

12. Women were disproportionately hit by the global COVID-19 unemployment crisis, seeing a 5% employment fall in 2020, as compared to 3.9% for men worldwide, according to the UN.

11. At least 500 million women and girls worldwide don't have access to a private, sanitary space where they can tend to their menstrual hygiene, according to UNICEF. That's half a billion women and girls across the globe who aren't granted the basic necessity of a clean, safe space to deal with their periods.

13. On average, a woman menstruates for a total of about seven years during their lifetime, according to UNICEF.

14. Women in the U.S. did not have the right to obtain credit cards separate from their husbands until the passage of 1974 of the Equal Credit Opportunity Act — you can thank the late Supreme Court Justice Ruth Bader Ginsburg for that increase in women’s financial freedom.

14. Women were not allowed to compete in track and field events at the Olympics until the 1928 Summer Olympics in Amsterdam.

15. Women outnumber men as they get older in the U.S., according to 2019 Census data. The approximate ratio of women to men ages 85 and older is 4.1 million to 2.2 million in the United States.

16. In 1987, Aretha Franklin was the first woman inducted into the Rock & Roll Hall of Fame.

17. Sally Ride was both the first woman in space and first gay astronaut when she flew on the Challenger space shuttle in 1983.

18. Women of nearly all races and ethnicities face higher rates of poverty than their male counterparts, according to U.S. Census Bureau data. The highest rates of poverty are experienced by American Indian or Alaska Native (AI/AN) women, Black women, and Latinas. About one in four AI/AN women live in poverty — the highest rate of poverty among women or men of any racial or ethnic group.

19. According to the CDC, Black and AI/AN women are two to three times more likely to die from pregnancy-related causes than white women in the U.S.

20. As of 2020, 53% of all people living with HIV are women and girls, as reported by UNAIDS. Every week, around 5,000 women aged 15 to 24 years become infected with HIV, and the risk of acquiring HIV is 34 times higher for transgender women.

21. Latina women experience the largest wage gap of any major racial or ethnic group in the country, according to the U.S. Department of Labor. For every dollar earned by a non-Hispanic white man, a Latina earns just 57 cents. Additionally, almost one in 10 Latinas working 27 hours or more a week live below the poverty line.

22. Women made up a record-breaking 18% of directors of the 250 highest grossing films in 2020, according to the Center for the Study of Women in Television and Film at San Diego State University. In 2021, however, that percentage went down to 17%.

23. Women comprised 21.6% of all artists on the Billboard Hot 100 Year-End Charts across the past nine years and represented only 20.2% of artists on the chart in 2020, according to the annual “Inclusion in the Recording Studio?” report by the University of Southern California. The 2020 report’s numbers indicate that there has been no sustained increase in the percentage of women artists in nearly a decade in popular music.

24. It is estimated that more than 22,000 girls a year die from pregnancy and childbirth resulting from child marriage, according to a 2021 analysis from Save the Children. West and Central Africa account for nearly half (9,600) of all estimated child marriage-related deaths globally, or 26 deaths a day, with South Asia, East Asia and the Pacific, and Latin American and the Caribbean following.

More like this
UK Black Pride 2022 Just Broke A Major Record
By Sam Ramsden
At 14, Tatiana Maslany Was Obsessing Over Tamagotchis & The Spice Girls
By Gabrielle Bondi
Scotland's First Period Dignity Officer Has Sparked Backlash
By Darshita Goyal
Beyoncé & Madonna’s “Break My Soul” Remix Honors A Group Of Black Icons
By Stephanie Topacio Long
Get Even More From Bustle — Sign Up For The Newsletter

This article was originally published on March 8, 2016