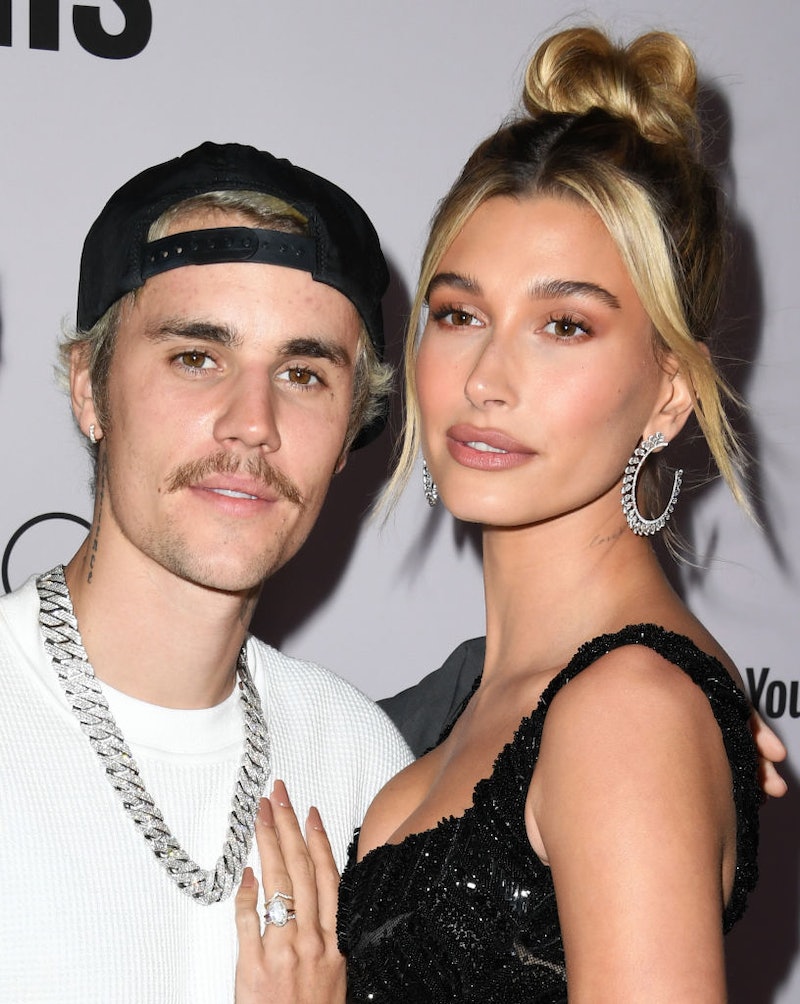 If you’ve been keeping up with the Biebers lately, then you know the power couple just celebrated their third wedding anniversary at the 2021 Met Gala. But things haven’t always been rose-tinted between the two (are they ever?). Both Hailey and Justin have been transparent about the challenges of marriage, but Hailey has gone on the set the record straight — her relationship is solid.

But if you’re curious to know what astrology has to say about the couple’s compatibility, we’ve got you covered. We spoke with professional astrologer and co-host of the Allegedly Astrology podcast Dana DeFranco to discuss the celestial details.

Let’s start with the core of our being, aka the sun sign. Hailey Bieber (born Nov. 22, 1996) is a freedom-loving and risk-taking Sagittarius. These bold fire signs are free-spirited explorers who love to learn. Justin Bieber (born March 1, 1994) is a dreamy and emotional Pisces. These water signs have gained a reputation for being on the more sensitive side and having their heads in the clouds. “Their sun sign compatibility is super steamy,” DeFranco tells Bustle. “While water is emotional and fire is passionate, both are intuitive.”

On the surface, it may seem as though having conflicting astrological elements may cause friction — Pisces tend to be tied to their own emotions whereas Sagittarians may get overwhelmed by them, but this actually works. That’s because their sun signs share the same mutable modality. Modalities basically reveal how we grow over time. Mutable signs are encompassed by being easily adaptable and ever-flowing. “Being mutable signs, they’re going to change together. Neither will hold the other back,” DeFranco says. It’s important that the couple is able to evolve without feeling the need to restrict or confine the other.

When it comes to our moods, emotions, and inner selves, our moon sign knows all. In astrology, this planet holds the keys to how we manage the deeper parts of ourselves that may not be as obvious as our sun sign is to others. “Hailey’s moon is in Taurus and Justin’s moon is in Libra. Both of these signs are ruled by Venus, which means their emotions are both balanced by the quality of their relationships,” DeFranco says. Venus is the planet of love, romance, and aesthetics, which implies the two have a special proclivity to romance. When these signs get together, there’s a chance that not only are sparks flying, but that they feel safe sharing intimate moments with one another. Taureans love security, and Libras love to make others feel good.

“When things are good, this partnership is great. But when Venus is traveling in a difficult sign or aspect, we can bet this will cause a rift in their usual harmony,” says DeFranco. Let’s say Venus is transiting Scorpio, aka the deep feeler — this could throw the two off balance. “But with Venus in a sign like Sagittarius, for instance, they’ll be able to experience the lighter side of life again.”

Thriving relationships have their complications, too — and the stars aren’t afraid to put those conflicts in the spotlight. “Hailey’s Virgo Mars on Justin’s Midheaven in Virgo can cause conflict,” says DeFranco. Mars is the planet of passion, aggression, and impulses. How someone shows assertiveness or how they react under pressure is primarily exhibited by their Mars sign. In relationships, this can manifest in how we respond to quarrels or how we defend ourselves.

“Mars in Virgo is well-meaning but can be super controlling, and always thinks they know best,” DeFranco explains. “The Midheaven represents our legacy and who we are in public. We might assume that this causes friction behind closed doors.” Justin’s Midheaven is also in Virgo, which implies he has a calculated way of managing his professional life. Because Virgos are known to be meticulous and like things done a certain way, Hailey’s Mars sign being in Virgo may come off as judgmental and somewhat bossy when suggesting ideas — which means they may struggle to find common ground when their ideas clash. “Virgo placements, though they mean well, can be extremely grating,” says DeFranco. While the two may bump heads over differences in opinions or professional decisions, their Venus signs seem to save the day.

They’re Dedicated To Work Things Out

When it comes to their Venus signs, which represent romance, the two are an interesting pair. Hailey’s Venus is in air sign Libra, while Justin’s Venus is in water sign Pisces. Normally, these elements have the potential to clash, but a romantic Libra can definitely meet a dreamy Pisces in the middle in terms of love. Also, there’s something hopeful about the pair’s Venus and moon signs. “Justin’s moon and Hailey’s Venus are conjunct in Libra,” explains DeFranco. When two planets are conjunct in astrology, it’s referring to a relationship between the planets in question, and in this case, it’s a positive one.

“Having these two placements conjunct, especially in Venus-ruled Libra, indicates a lot of sweetness is present in their relationship. In Libra, this conjunction is always going to focus on how to make the relationship work, and how to work together,” DeFranco says.

The Verdict On Hailey And Justin’s Compatibility

The pair’s planetary placements show clear signs of a thriving romance. While it may seem from their sun signs that they’re totally different people, the duality is actually balanced and fun. Their moon signs are both flirty and romantic, so they can appreciate gestures of romance — it also sets them up for sincere comfort and safety. Marriage isn’t easy, and it’s likely that the added pressure of nonstop publicity can cause a strain on their romance, yet it seems their romance is unwavering. Despite being closely examined in the public eye, the cosmos show that the Biebers have the staying power to work together, evolving and adapting through the ever-changing and restless life of fame.