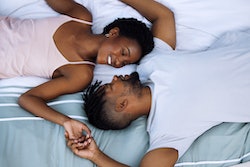 A Leo-Leo couple is that one duo who just seems to attract attention wherever they go. They’re always laughing and smiling, and when they move, they’re totally in sync. Think double-Leo newlyweds Jennifer Lopez and Ben Affleck who just can’t seem to get enough of each other. But what are they really like when it’s just the two of them? When you date someone who has the same zodiac sign as you, the relationship could go either way. After all, your partner’s best and worst traits will be similar to yours. And when you’re dealing with a sign that’s known for being wild, dramatic, passionate, tempestuous, and intense, you can expect a fun rollercoaster of a ride. Leo and Leo’s compatibility shows why this fiery pair of lions have what it takes to last a lifetime.

“Two Leos together can make the ultimate fairytale,” astrologer Clarisse Monahan tells Bustle. In the astrology, Leo rules the heart, making them one of the most passionate and romantic signs. They’re well-versed in the art of courtship and tend to take the lead when it comes to love. As a romantic partner, Leos tend to be super generous and a bit “theatrical” when it comes to planning dates or showing affection. They’re known for being outgoing and flashy, so you can just imagine how two Leos in love would be.

Leo is also associated with the fifth house in astrology, which is the house of romance and fun. “There’s no more playful sign than Leo, and two Leos can mean double the merriment,” Monahan says. “This tends to be a high octane connection with both having the same effervescent and lighthearted approach to life.”

On the other hand, the lion can get a little possessive “in the thrall of love.” According to Monahan, they need to have complete adoration from their significant other. If they feel like they’re not getting the attention they deserve, they can be unpleasant to be around. More often than not, a Leo’s jealousy stems from their desire for appreciation. As long as they feel like they’re number one in their partner’s life, there shouldn’t be a problem.

Leo and Leo make a good match in bed, too. Because they’re fire signs, you can expect a lot of passion and playfulness with a bit of competition. According to Monahan, this lusty couple may battle for dominance in the bedroom. They tend to prefer marathon sessions over quickies, and they won’t stop until both partners are left completely satisfied.

And the zodiac’s royal lion likes to go big. As astrologer Theresa Reed tells Bustle, “Two Leos together is the ultimate ‘dream team glam rock star couple.’” So expect all the flourishes like satin sheets, candles, incense, and plenty of mirrors because they like watching themselves.

“Leos aim to please but they want to be pleasured too,” Reed says. “If one of them wants to be the star of the show, the other will quickly let them know it’s a double billing.”

The lion rules over the heart, so these two make a loving pair. They’re warm, affectionate, and aren’t afraid to share their feelings. It’s easy for them to connect and form an emotional bond because they understand how the other feels.

According to Monahan, their emotional approach to relationships is pretty steady. They’re both romantic and value loyalty in a partner. Once they’ve made a commitment to each other, there’s no turning back. “Two Leos together can create a long lasting and deep bond, both appreciating the other’s stalwart approach and commitment to life and each other,” she says.

But Leo is a fixed zodiac sign, which means they have a tendency to be stubborn. “If they get into a disagreement, all hell breaks loose,” Reed says. “It could quickly lead to a grudge match with this stubborn pair. Worse yet, if they cannot contain the fire, a bridge could get burned to a crisp. If they remain focused on the love and keep their tempers contained, they’ll find they are pretty compatible on the emotional front.”

Leo and Leo’s compatibility for dating can be one of the best. According to Tara Bennet, astrologer and spiritual coach, Leos are in love with romance and will have a type of courtship that’s “enchanting” to watch.

“They make a dream team, a formidable couple, and are the envy of those around them,” Bennet says. “Driven to succeed, these lions will push each other to become the best they can be, both as a couple and individually.”

Leos are loyal fixed signs, so they’re less likely to cheat and more likely to stick it out when times get tough. “Their loyalty towards each other has no bounds,” Bennet says. “These two lions, if they can let go of their egos and focus on each other, are more like swans — mated for life. When it works, it really works.”

When it comes to friendship, Leo and Leo make a good match. “Companionship is a comfortable space for two Leos,” astrologer Maria Hayes tells Bustle. “To a certain extent, they may have a competitive rivalry going on. Despite that, they can still come to an agreement primarily because they understand each other’s seemingly unreasonable traits: pride and ruthlessness.” It’s easier for them to forgive, forget, and move on.

If they don’t let their egos and competitiveness get in the way, they can be best friends for life. At their core, Leos are loyal, generous, and protective over the people they love. “It's important to Leos that their friends are happy and they'll go to the ends of the earth to make that happen,” Bennet says. “When two Leos become friends they will take over every party, have endless adventures, and talk for hours. When the friendship works, they’ll push each other to achieve their maximum potential.”

Communication may be an issue that a Leo and Leo couple will have to overcome. According to Hayes, Leos will always be dominant in all aspects and communication is no exception. “Think of two alphas in a relationship,” she says. “You can pretty much imagine constant shouting and even swearing. Such unyielding nature can taint or even block their messages. But like royalty, they’ll express their compromises through non-verbal means. You won’t expect them to say sorry verbally, yet they’ll apologize through gifts and acts of service.”

Leo is ruled by the Sun, which represents the self. Many times, their ego can get them into trouble, especially in relationships. According to Monahan, they have the potential for a tempestuous relationship with many showdowns. “They can be quite stubborn, so this can result in a battle of wills with both partner refusing to change their own aims or demands,” she says.

Additionally, their individual need to be the center of attention can also come with its set of problems. For instance, they’re a zodiac sign that expects their partner to completely adore them, and be there for them whenever they need them. If that means dropping something to be with their Leo, then so be it. Leos can be overly demanding on their partners. But if they can put aside their ego and put their energy towards being a team, they can be the “ultimate power couple that shines together.”

Are Leo & Leo A Good Match?

Overall, two Leos in a relationship make a solid pair. They have a lot of the same values and goals for the future, and they’ll love and support each other. It’s a compatible zodiac that can last long-term with a little bit of work. As Monahan says, “There’s no better person for a Leo than another Leo.”

More like this
Libra & Aquarius Can Be Great Together, As Long As They Do One Thing
By Kristine Fellizar
Why A Libra & Libra Couple Might Become Codependent
By Kristine Fellizar
Think Your Partner Is Cheating? These Tarot Cards May Confirm Your Suspicions
By Kristine Fellizar
Here’s Why Sagittarians Should Pursue A Career In Academia
By Nina Kahn
Get Even More From Bustle — Sign Up For The Newsletter