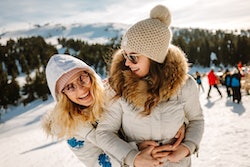 Libra and Pisces represent two of the most romantic signs in the zodiac. The Venus-ruled Libra is the sign of partnerships, while the dreamy, Neptune-ruled Pisces is a sign of fantasy and creativity. When these two get together, they can create the type of fairytale relationship they’ve both always wanted. Getting there, however, isn’t necessarily going to be a walk in the park. Libra and Pisces’ zodiac compatibility has everything you need to know about this Air and Water sign pair.

“A relationship between Libra and Pisces Sun signs is bound to be romantic, sensual, and emotional,” Chelsea Jewel, intuitive and karmic astrologer, tells Bustle. “Both signs share a deep love of beauty, art, music, and taking care of others. I'd expect lots of flirting, PDA, cuddling, and genuine sweet gestures between these two.” An ideal date for the duo, Jewel says, would be something artistic that makes them both feel connected emotionally — watching a moving film, attending a concert, or visiting a gallery.

Libra and Pisces make an ideal match because they both love being in love. They fall in love head over heels at first sight, jump into relationships quickly, and have a tendency to make their partner their entire world.

Because of this, Jewel says it’s important for these two to set boundaries or else they may lose their individual sense of identity within the relationship. “Each partner needs to check-in with themselves often to make sure they are truly being fulfilled by the other person, and that they're not just in love with the feeling of being coupled up,” she says.

Read on to learn more about a Libra and Pisces relationship.

Once they’re on the same page, Libra and Pisces can make a beautiful combination in bed. As Stina Garbis, professional astrologer and psychic, tells Bustle, “Pisces may wait a while to have sex until the time is right, which may not work for Libra who uses sex as one form of expression of love.”

Both Libra and Pisces are selfless signs who enjoy pleasing their partners in bed. They’ll gladly take the time to learn each other’s likes and dislikes. Since they both share a strong love of beauty, there needs to be a “stimulating visual component” to their sex life, Jewel says. These two will enjoy getting dressed up for each other, wearing sexy lingerie, and staging the ideal romantic environment with candles and flowers.

These two will have no problem falling for each other and may plunge head-first into a committed relationship once their mutual interest is known. However, forming a deep emotional bond that lasts will take time.

“Emotionally, Pisces wants to give everything to their Venusian goddess,” Garbis says. “They want to lose their ego and be anything Libra wants them to be. However, they may try to suppress their intense feelings until it comes bubbling up in the form of obsession or a desperate need for attention.”

As a mutable sign, Pisces are very flexible and like to listen and cater to the needs of others. Libra, on the other hand, is a cardinal sign and is represented by the scales so they’re having everything be equal. They will also bring a lot of new ideas to the table. If Pisces is going to keep their feelings to themselves, Libra will as well.

On the plus side, both signs are emotionally sensitive and can be empathic. According to Jewel, it can sometimes feel like they can intuitively sense one another's needs and feelings. The levelheaded Libra will help Pisces navigate their ever changing emotions, while Pisces will give Libra a safe space to be emotionally expressive.

The Biggest Potential Problem Area In A Libra-Pisces Relationship

With a connection so strong, it’s important for Libra and Pisces to find ways to remain grounded. “This couple could get caught up in the fantasy of this seemingly perfect match-up,” Garbis says. “When both of these partners fail to live up to their expectations, that’s when the bickering sets in.”

Another potential issue is a lack of healthy arguing. According to Jewel, “Both Libra and Pisces can be so compassionate and peace-oriented that there may be [an absence] of healthy tension in their relationship, which could ultimately lead to boredom and a lack of appreciation for one another.” If they can’t find a way to be OK with expressing their hurt and anger, it could lead to resentment, distance, or the end of their relationship.

For Libra and Pisces, setting healthy boundaries is also essential as they both tend to lose themselves in their relationship. “Coming together after a day or even a few hours apart will actually help create some of that healthy tension and separation that's needed to keep them from completely melding into one person,” Jewel says.

According to Valerie Mesa, astrologer and soul coach, this pairing works much better as friends than it does romantically. “I think they’re both visionaries and they will love visiting a museum together or sitting under a tree at the park,” she says. “When it comes to that atmospheric energy, they’re great together.”

Even better, a Libra will “never judge a Pisces for disappearing or needing time to themselves,” says Mesa, which Pisces will definitely appreciate. They know if they take a few days to respond to a text, Libra won’t be offended.

Are Libra & Pisces a Good Match?

Overall, Libra and Pisces are a very compatible match as long as they’re able to achieve a balance between spending time together and carving out some alone time. They both highly value love and relationships, they share many similar interests, and they both long to have a fairytale romance. This is one zodiac couple who has what it takes to make their relationship last a lifetime.