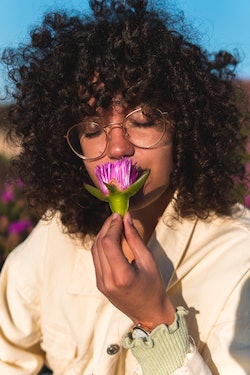 Each year around the spring equinox — which is usually March 19 or 20 — the sun travels out of Pisces and into Aries. If you celebrate your birthday around these dates, you might consider yourself a Pisces-Aries cusp, or feel like you have a blend of the cosmic characteristics of both zodiac signs.

The way astrologer Ryan Marquardt explains it, since the planets can only be in a single sign at a time, “We have to interpret each planetary placement based on the sign it's in, even if you're born one minute before or after the sun changes signs.” Still, if your birthday falls around the end of Pisces season and the start of Aries season, you may still get the feeling that you’re a cosmic cocktail of both zodiac signs.

It makes sense that people born around the Pisces-Aries cusp might feel like they’re a mix of the two signs — but it has more to do with the energy of the planets involved. For example, your personal planets, aka Venus and Mercury, travel close to the sun, meaning if you’re an Aries, it’s pretty likely that your Mercury and Venus sign will be in Pisces, or the other way around. Since Venus and Mars determine your values and passions, respectively, you may feel like you embody both Pisces and Aries traits if your sun is in one sign but your Venus or Mars is in another.

Even if you don’t have a cusp birthday, you might still have crossover traits between Pisces and Aries in your birth chart. Keep reading to find out if you carry the traits of a Pisces-Aries cusp.

1. Pisces-Aries Cusps Are Sensitive to Endings And Beginnings

The Pisces-Aries cusp is a particularly conflicting one, says Marquardt, because Pisces completes the zodiac cycle where Aries kicks off a new astrological year. “Making a jump from Pisces to Aries means you're closing out a life cycle and embarking on something new,” explains Marquardt. Because of this, a Pisces-Aries cusp may be welcoming to new people or beginning projects just as much as they are adept to accept when a relationship ends or the bittersweetness that comes with finishing a project. People born on the cusp of Pisces and Aries know that “with every ending comes a new beginning, and anything that begins must come to an end eventually,” explains Marquardt.

2. Pisces-Aries Cusps Have A Lust For Life

What does the old-soul of a Pisces and the naivety of an Aries have in common? A zest for life experiences. “Aries is the initiator of life itself. It comes bursting into the world, wide-eyed and full of energy and enthusiasm,” says Marquardt. On one hand, Aries is excited to make memories and even mistakes because of their trial and error perspective on life. On the other hand, “Pisces has already experienced everything in the zodiac, which means it's an old-soul type that deeply feels the array of experiences we can have throughout a lifetime.” While Aries may feel like every life experience is a novel one, Pisces can appreciate the fact that you never stop learning.

3. Pisces-Aries Cusps Love Being In Love

Between Aries’ burning passion for all things sensual and Pisces’ hopeless-romantic vibe, it’s easy to see why a Pisces-Aries cusp has an affinity for romance. According to Marquardt, Aries may be on the independent side of things, but the fire sign knows there’s power and growth in fostering a strong relationship with another, a sentiment shared with Pisces. “They operate in distinct ways, with Pisces being more receptive and Aries being more assertive, but ultimately they both love to love,” says Marquardt.

4. Pisces-Aries Cusps Have An Intense Desire To Be Nurtured

Marquardt says to think of Aries as an eager newcomer of the world — wide-eyed and ready for action — and Pisces as a well-versed, albeit exhausted, soul with tons of wisdom. Both signs may experience life differently, but share a need to be taken care of by others. “Pisces and Aries don't ask for help in the same way, but they both need accountability and reliability in their lives,” he explains.

Ruled by Neptune, the planet of dreams, Pisces are always drifting off into slumber, which contrasts against Aries’ Mars-ruled restlessness. Pisces pull inspiration from their dreams while Aries could benefit from recharging to keep up with their fast metabolism. A Pisces-Aries cusp may be drawn to the dreamworld, by either having an excess amount of sleep or by keeping themselves awake to the point of burnout, according to Marquardt.