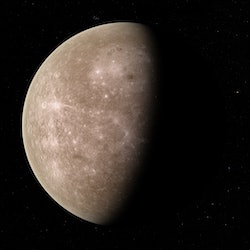 You don’t have to be a professional astrologer to know that your zodiac sign holds certain qualities and motivations. But did you know each planet also possesses a personality of its own? In fact, each zodiac sign is governed by a planet (sometimes by two!). That planet’s traits give your sun sign its certain je ne sais quois. Apropos of chatty and ultra-intelligent Gemini, its planetary ruler is the smallest in our solar system — but its petite proportions are in no way indicative of the power this celestial body has on the collective. Knowing which planet rules Gemini can help you harness its energy and apply it to your day-to-day.

“Mercury is the ruler of communication, technology, and travel, and is associated with the zodiac sign of Gemini,” Imani Quinn, astrologer and co-author of Astrology SOS, tells Bustle. This planet may be small in stature, but what it lacks in size, it makes up for in its impact on your daily interactions with others. “How your communication is delivered, expressed, and processed is all in ode to planet Mercury,” Quinn adds.

Mercury rules over both Gemini and Virgo. The concentrated Mercurial energy gives both mutable signs the ability to think quickly on their feet and express themselves even through dramatic shifts (hello, Mercury retrograde!).

Understanding how Mercury operates in astrology is a great way to harness its energy, so even if you aren’t a Gemini yourself, you can still benefit from learning about the fast-paced planet. Keep reading to learn more about Gemini’s ruling planet, Mercury.

All About Mercury, Gemini’s Ruling Planet

To give context to how small Mercury is, it’s is only somewhat larger than the moon. Mercury boasts qualities associated with the Greek god Hermes, who in Roman mythology is known as Mercury. In the Greek pantheon, Hermes was seen as the messenger of the gods, whose purpose was to deliver information between the dead and the living. In Roman mythology, Mercury was the god overseeing merchants and travelers, but he also ruled over swindlers and tricksters. Similarly, the planet Mercury represents communication, mindset, and travel — but it can also explain away some of Gemini’s hallmark playful mischief.

Because communication plays a critical role in daily life, Mercury’s impact is most noticeable in your routine interactions with others. “Mercury influences our most important contracts and negotiations. It also plays a part in our travel, and how smooth or difficult those pathways become for us,” explains Quinn. That’s why when Mercury is direct in its orbit, communication, mentality, and travel plans are mostly intact — but during the planet’s thrice-yearly retrograde periods, misunderstandings, brain fog, and travel mishaps run rampant.

Knowing your Mercury sign is a great way to uncover your interactions with others as well as yourself. “Your Mercury sign can help you figure out our communication style and how to best convey our ideas, thoughts, and expressions,” says Quinn. Your Mercury sign can identify you as closed off or sociable, depending on the sign Mercury is stationed in your birth chart. “Mercury can be the reason that you’re a bad texter or the drive behind your need to express and share your voice,” Quinn adds.

Geminis are certified socialites and their ability to express themselves with effortless vibrancy is largely thanks to their Mercurial ruler. “Mercury makes Geminis great with words and allows them to be very outgoing, hence why they are known to be flirtatious, it is only part of their nature,” explains Quinn. If you’ve ever mistaken a Gemini’s friendly conversation for flirting, you’re not alone.

Mercury’s influence on Gemini doesn’t stop at communication, but it also plays into their inquisitive mind, too. “Geminis are very curious, which means they’re great at asking questions, and fast learners. This zest for knowledge comes from Mercury’s influence on Gemini’s energy,” explains Quinn. Like other fellow air signs, Geminis are always on the hunt for reason and context, but it’s their Mercurial ruler that gives them the reputation for being intellectuals who seek the deeper meaning in everything.

If you want to use Mercury’s energy to your advantage, look no further than paying attention to your communication habits. Looking at your Mercury sign is a great way of understanding how you vocalize your ideas and speak with others. Working diligently with Mercury through shadow work and reflection can help you tweak and improve your communication skills, even during its dreaded retrograde.

More like this
The Most Common Traits Of A Gemini-Cancer Cusp
By Nina Kahn
Here's Your Daily Horoscope For June 30, 2022
By Mecca Woods
All The Astrological Events Happening In July 2022
By Nina Kahn
4 Zodiac Signs That'll Have The Luckiest July
By Brittany Beringer
Get Even More From Bustle — Sign Up For The Newsletter