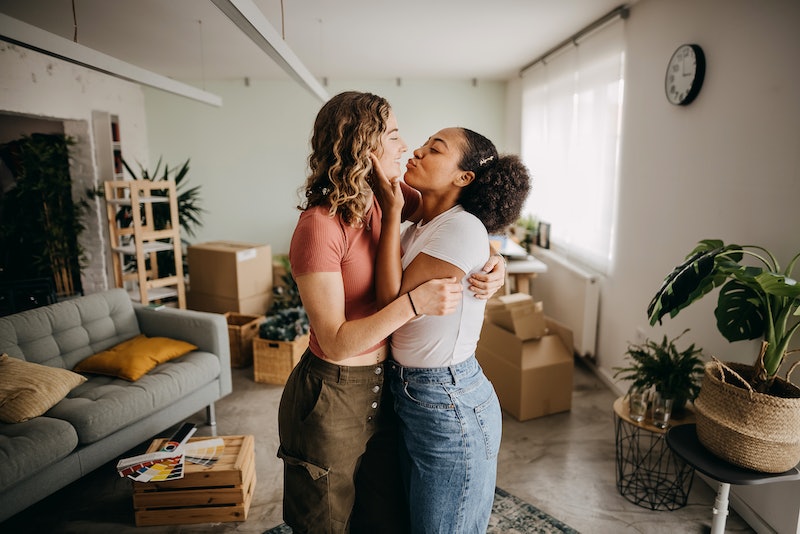 Scorpio and Aquarius are two zodiac signs who have completely different ways of looking at relationships. The mysterious scorpion longs for a deep emotional connection, and likes to become one with their partner. The water bearer, on the other hand, is very independent — love isn’t something they prioritize in their lives. If it comes down to it, they would choose spending time with friends over whoever it is they’re dating. Though it isn’t the most organic relationship, it isn’t a completely hopeless situation either. Scorpio and Aquarius’ compatibility shows why this relationship may be more trouble than it’s worth.

In astrology, Scorpio and Aquarius form a square aspect, which means they’re 90 degrees apart in the zodiac wheel. According to astrologer Lisa Kiss, these aspects don’t typically make a good match. This pairing also combines two fixed signs with opposing elements. “Their one commonality would be that they are stuck in their ways,” Kiss says.

On the plus side, being fixed signs mean they’re both loyal and consistent. “Even if years go by, you can count on them to still be doing the same thing,” Kiss says. “Both Scorpio and Aquarius aren't fans of change. If they were together they would appreciate each other's loyalty and that would help build trust, which is important to both of them.”

At the same time, they have very different personalities and ways of expressing themselves. For instance, Scorpio likes to talk about their feelings in order to create an emotional bond. Meanwhile, Aquarius is more logical. They enjoy talking through problems and coming up with solutions, but they tend to be rather disconnected from what they’re feeling. Making a relationship work between these two can be challenging, but it’s possible if they’re willing to compromise.

Aquarius is a naturally curious sign that will be intrigued by Scorpio’s mysterious allure. According to Kiss, their opposite elements could create an interesting tension that gets released sexually. However, there remains the possibility that they’ll want different things in bed or have different expectations about exclusivity and commitment.

For instance, Scorpios tend to be more relationship-oriented than Aquarius. If their relationship starts off as a friends with benefits situation, chances are Scorpio will find themselves wanting more first. According to Garbis, Aquarius may have a hard time settling down and committing sexually. “They may maintain suspect friendships that seem a bit sexual in nature, driving jealous Scorpio insane,” she says. “Scorpio, be aware of being put in the friend zone with Aquarius, as they confuse friendships and relationships.”

Emotionally, these two are very different. Again, Scorpio is a Water sign, so they’re naturally in tune to their feelings. Aquarius is an Air sign, so they’re more logical in nature. If Scorpio isn’t careful, their intense emotions may be too much for the flighty Aquarius. At the same time, Aquarius’ aloofness can be triggering for the security-seeking Scorpio.

“Aquarius can be very passionate or very cold, and this may turn Scorpio into an anxious heap,” Garbis says. “Scorpio may always fear the worst and constantly be focused on the end, and will try to control the situation for fear that Aquarius is trying to hurt them and leave.”

When it comes to love, Scorpios tend to fall very hard. Once they’re in a relationship, that’s the most important thing to them. Aquarius doesn’t operate like that. According to Garbis, they tend to focus on life’s bigger picture. They’re known for being humanitarians who like to help others. They also have a rich social life and enjoy spending time with friends, which can make Scorpio very jealous.

“This relationship can bring a dramatic change to both signs,” Garbis says. They have a lot to teach each other, which can be good long term. Scorpio will help “awaken” Aquarius’ passions and make them feel emotionally alive. A relationship with Aquarius will help Scorpio learn how to let go of their need to be in control.

When it comes to communication styles, Scorpio and Aquarius are polar opposites. Scorpio is more of a quiet observer, while Aquarius is a chatty air sign. Because of this, they may struggle to understand each other at the beginning of the relationship.

However, Tara Bennet, astrologer and spiritual coach, says to give it some time. “Rather than words, they’ll often share intimate looks or gestures,” she says. “As their relationship grows, they’ll reach a middle ground where they communicate just enough that they are both happy.”

Scorpio and Aquarius’ dating compatibility is pretty poor and they’re not exactly a match made in zodiac heaven. However, that’s not to say this pairing can’t work. In fact, Bennet says, these two signs “complete” each other in their own way.

“Where one falls short, the other makes up the difference,” she says. “Scorpios hold their cards close to their chest and Aquarians typically wear their heart on their sleeves. If they can learn from each other and take power from their differences, a relationship can develop.”

Once in a relationship, they’ll have their share of enjoyable moments together, especially when it comes to sex. “This pair makes ideal partners between the sheets,” Bennet says. “Scorpio’s sexuality and controlling nature, paired with Aquarius’ need to please, will guarantee some passionate nights!”

Although Scorpio and Aquarius don’t make the best match when it comes to romance, there is potential for a good friendship. According to Bennet, these two fixed signs can make a great match.

“Both having robust characters, they’ll be equals in their friendship,” she says. “Their personality traits are in harmony, where one lacks the other has strength. When they come together, they make a formidable force.”

One thing that may cause some tension, however, is jealousy. Scorpio is notoriously possessive of their loved ones, while Aquarius likes to mingle and meet new people. The airy water bearer is also known for being pretty flakey at times. This will upset Scorpio who will feel like Aquarius isn’t taking their friendship as seriously as they are. Luckily, Aquarius is good at problem-solving, and will talk things out with their scorpion friend.

Potential Problems In A Scorpio-Aquarius Relationship

The biggest problem in this pairing is that they’re both fixed signs. Because of that, there’s really no changing their ways. According to Garbis, Scorpio’s fixed water energy leads to intense emotions like jealousy, rage, bitterness, and love. Aquarius’ fixed air energy can make them stubborn, independent, and cold.

“The square aspect makes this pair fundamentally different,” Garbis says. “Scorpio wants the relationship to give them everything, while Aquarius looks to the world for their satisfaction.” Unless one partner is willing to radically compromise in the way they approach relationships, this is going to be a challenging relationship for both of them.

Are Scorpio & Aquarius A Good Match?

Overall, Scorpio and Aquarius are considered to be an incompatible zodiac match. They could have some really fantastic sex, but making an actual relationship work will be tough. If they can find a middle ground that works for both of them, there’s a possibility that their relationship can last. Otherwise, they’re better off as friends — or friends with benefits.

More like this
The 3 Zodiac Signs Most Likely To Get Married Later In Life
By Kristine Fellizar
4 Zodiac Signs That Will Take Forever To Admit They Like You
By Kristine Fellizar
TikTok's "Triangle Method" Technique Is The Key To Better Flirting
By Carolyn Steber
12 Active Date Ideas That'll Get You & Your Boo Outside
By Lexi Inks
Get Even More From Bustle — Sign Up For The Newsletter
From hair trends to relationship advice, our daily newsletter has everything you need to sound like a person who’s on TikTok, even if you aren’t.