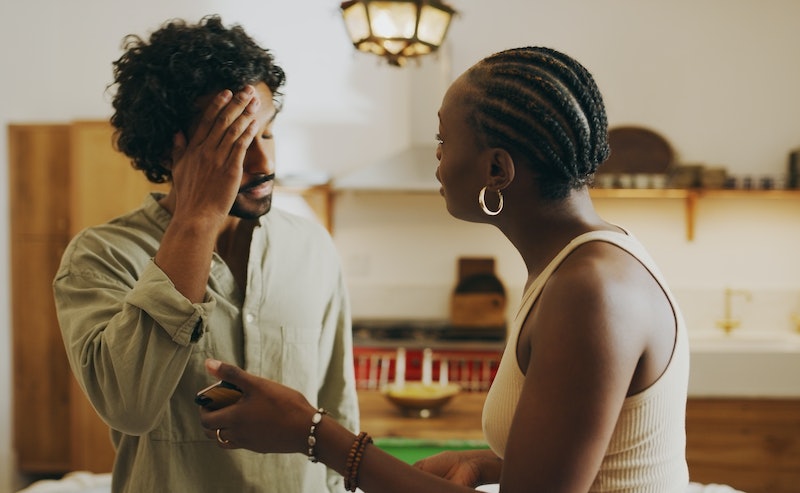 Sometimes, you meet someone and you can tell it’s not going to go anywhere in the first five minutes of your date. Every once in a while, though, someone comes along with whom you share an intense connection from the start. You want to be with them 24/7, and you can’t imagine a life without them — when all of the sudden, they make like a Katy Perry song and become really hot and cold, leaving you totally in the dark about where things stand. This on-and-off behavior may persist for months until you realize that you’ve wasted all this time and energy on an exhausting situation that never changes. However, no matter how many times you try to tell yourself to let this person go, you just can’t. If this situation sounds familiar, you may be in a karmic relationship.

That being said, being in an extremely hot and cold relationship doesn’t necessarily mean you are in a karmic one. There are certain hallmarks of karmic relationships that will help you differentiate them from non-karmic codependent, dysfunctional, or even toxic ones. For all you need to know about what exactly a karmic relationship is, how to identify it, and what to do when you’re in one, experts spoke with Bustle to break it all down.

What Is A Karmic Relationship?

Simply put, a karmic relationship can be explained as one where you have a specific type of soulmate — but not the type you are likely used to hearing about in movies, books, and songs. In a karmic relationship, you will experience turbulence and challenges with someone as a way to balance your spiritual karma and ultimately help you both grow.

As Charmayne Kilcup, Ph.D., psychologist and relationship coach, tells Bustle, there are two kinds of karmic relationships. The first is when you’ve known someone in a past life and you’re back to heal whatever happened between you two back then. The second occurs when you’re stuck in a situation because you have a karmic pattern that needs to be healed, such as not standing up for yourself, losing yourself in a relationship, or taking advantage of people.

While karmic relationships can form with people you’ve known before, that isn’t a prerequisite. You can heal karma with someone new, too. “Either way, the point of this kind of relationship is to heal and grow,” says Kilcup.

How Can You Tell If You’re In A Karmic Relationship?

The feeling that both partners have always known each other is the hallmark of a romantic karmic relationship. “They may feel so connected to their partner they [don’t] realize this person is in their life to work on some issues,” professional psychic and spiritual advisor Davida Rappaport tells Bustle. “This is often called ‘unfinished business.’”

When you’re in a karmic relationship with a soulmate, you may notice communication breakdowns, personality quirks that drive you crazy, trust issues, or emotional abuse. Because the relationship can feel very intense, it can lead to other unhealthy behaviors, like neglecting other people in your life to focus on your partner or constantly making excuses for them. You may find yourself stuck in an on-again, off-again relationship that never turns into anything more steady. Even if you know you deserve better, you keep going back.

If that dynamic sounds similar to a toxic relationship, that’s because karmic relationships often come with an element of toxicity. “Their purpose is to challenge you and help you break out of a pattern that's holding you back,” Kilcup says. These situations will continue to push you until you’re finally ready to grow.

Figuring out what that pattern is will take time and lots of self-reflection. “For some, they may have a karmic lesson of standing up for themselves, knowing their self-worth, and not tolerating being taken advantage of,” Kilcup says. “Other examples of karmic patterns that we are here to clear include learning to empathize with someone, learning compassion, learning how to be vulnerable, and learning how to say ‘no.’”

How To Break Free Of A Karmic Situation

In order to get out of a karmic relationship, you first need to admit that you’re in one. According to Kilcup, this tends to be the hardest part. “We can easily get in denial and say to ourselves, ‘But I really love them!’” she says. “Yes, you do love them. But just because you love them doesn't mean you are supposed to partner with them in a long-term way.”

If you and your partner have karma together, you both need to be be willing to work through your problems. Breaking up with someone doesn’t necessarily mean that your karmic ties will be cut for good. In fact, Rappaport says, “When you end a relationship without working on your issues and problems — and this often happens when a relationship is unhealthy — the karma connection that exists between you may or may not terminate.”

It’s important to note that you don’t need to work on your issues with the other person if they’re unwilling to put in the effort. You don’t need to stay in a relationship that isn’t healthy just because you have a strong spiritual tie to them. The lessons you would’ve learned in this relationship can also be worked on in another with someone else. “Your karmic issues are yours, regardless of the other person and your connection to them,” Rappaport says.

Reflecting on your behavior in past relationships can help you figure out what kind of karmic pattern needs to be broken. For instance, maybe you tend to get very dependent on your partner or you hide true feelings to avoid conflict. Whatever it is, take the necessary steps to make some changes. You don’t need any specific rituals, crystals, or help from a spiritual advisor to end a karmic situation. It’s all you.

More like this
Are Quality Time & Gift-Receiving Love Languages Compatible?
By Lexi Inks
20 Women Reveal Exactly How Long It Took Them To Get Over Their Ex
By Amanda Chatel and Lexi Inks
10 Creative Sexting Ideas That Don't Involve Nudes
By Lexi Inks
18 Personality Traits Of A Cheater, According To Experts
By Carina Wolff and Lexi Inks
Get Even More From Bustle — Sign Up For The Newsletter