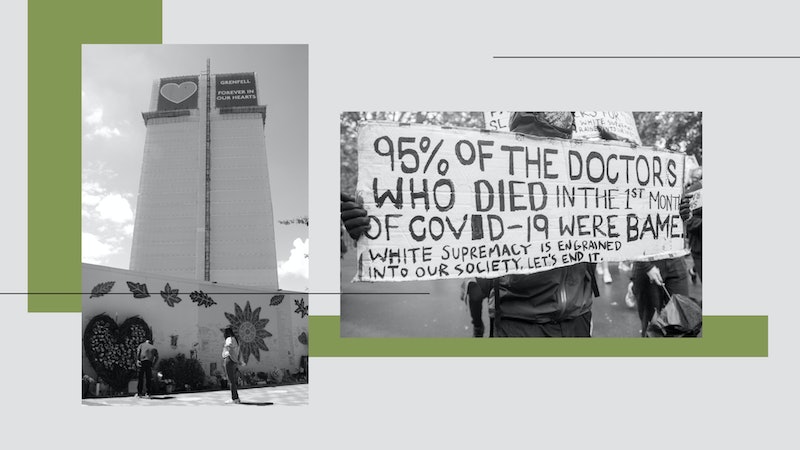 In response to the murders of Black people by police across America and subsequent protests in support of Black Lives Matter around the world, discussions about race are, rightly, becoming more everyday. For many families, peers, colleagues, and friends here in the UK too, addressing our own issues of systemic racism is an equally pressing matter. Just three years ago, the Grenfell Tower disaster saw BAME communities disproportionately affected by government neglect, and more recently Syrian refugee Shukri Abdi’s death was treated as an accident, despite extensive evidence of racially motivated bullying suggesting otherwise. During the coronavirus pandemic, the Office of National Statistics (ONS) released figures showing that Black people were four times more likely to die from the disease than white people.

These examples are among the many instances of injustice that have prompted much-needed pressure online and in the media for real change from those with power in the UK. Despite this, the conversations we have at home can still feel difficult to approach, particularly when relatives or friends are quick to rebuff attempts at analysing white privilege, or express concern about protesters bringing down statues of slave traders.

Having a plan, and entering these conversations with informed, researched points can help create a constructive atmosphere for learning. Preparing yourself with statistics, for example, can be a good place to start.

Statistics are hard to disprove because, well, they’re statistics. They are, by definition, scientific, and offer a straightforward way of summarising the crux of a situation without getting too wordy. Putting the UK’s deep-rooted racial inequality into unambiguous terms like these can be helpful when discussing the extent to which systemic racism permeates our daily lives. They offer absolute evidence for how little has been done to support BAME groups in the UK up to this point, as well as spotlighting the dramatic changes that need to be made within the bigger systems that continue to unfairly oppress minorities across the country.

To provide some context for these conversations and statistics, according to the 2011 census, 87% of people in the UK are white and 13% belong to BAME groups – to simplify, that means 1.3 out of every 10 people are non-white. Visualising this figure when reading the below statistics can be a useful way of remembering just how vast the manifestations of racial inequality are in the UK.

It's important to remember that the below statistics should act as a starting point for your continued education on and action against racial inequality in the UK. That said, sharing and discussing them with your peers, relatives, and colleagues can be a powerful place to begin – change starts at home.

If you’d like to learn more, there are a number of Instagram accounts you that share helpful information on the state of racial inequality in the UK. Das Penman and Runnymede Trust are just two of these, and journalist Mona Chalabi shares infographics that highlight inequality on a global scale.

More like this
Iran Has Issued A Death Sentence Over Mahsa Amini Protests
By Catharina Cheung, Darshita Goyal and Maxine Harrison
Ayurvedic Principles & Family Are At The Root Of Fable & Mane
By Justine Knight
It’s About Time Black Girls’s Voices Were Heard – & 'Girlhood Unfiltered' Is The Start
By Paula Akpan
MOBO Awards Found Kanya King On The Woman Whose Grit & Determination Spur Her On
By Kanya King
Get The Very Best Of Bustle/UK