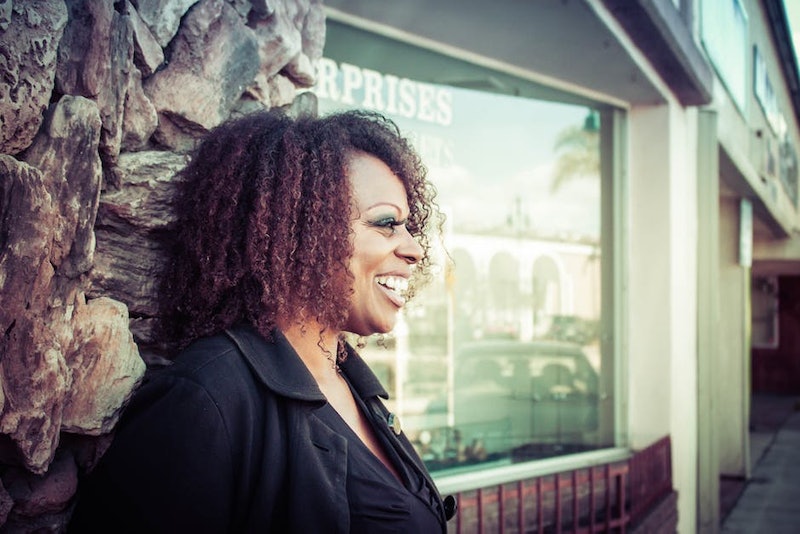 While you shouldn't worry too much about what people think, there are definitely some special occasions when you might want to consider how people perceive you. Think about big moments — like job interviews, networking events, and maybe even first dates — where that first impression is key. In these situations, you might want to put a little extra effort, and pay attention to things like body language and eye contact.

How you enter a room, how you hold yourself, and even how you speak can truly charm people if done correctly. But these skills can come in handy even in less high-pressure situations. It never hurts to give off positive vibes, even if you're just ordering coffee or walking down the street.

Good thing it's so easy to make little tweaks, and change your energy. "There are things you can control about your appearance and mannerisms that can have a big impact on what people think of you," author and life coach Jaya Jaya Myra tells Bustle. Whether it's your posture, your eye contact, or the fact you're wearing sunglasses, read on for some of the weirder things that can impact how people perceive you — so you'll know just what to watch out for when out navigating the world.

If you're nervous, you might not make a ton of eye contact. And that's understandable. But do keep in mind how it can impact your life. "Eye contact is one of the most important things that can affect how people perceive you," professional matchmaker Gina Marciniak tells Bustle. "If you don't look directly into someone's eyes during a conversation, you can come off as dishonest and phony. However, it's important not to lock eyes either — that borders on creepy." It's all about that happy medium, which puts people at ease and makes it easier to form relationships.

2. Glancing At Your Phone

Whatever public situation you might be in, it's almost never OK to look at your phone. Whether it's on a date, during a job interview, or while out to lunch with friends — just don't do it. "Nothing says 'I have more important things I could be doing right now' than trying to have a conversation with someone who can't seem to disconnect with the digital world," Marciniak says.

3. Your Open (Or Closed) Body Language

Paying attention to how you hold yourself — either with closed off body language, or open body language — can make a pretty big difference. "Keeping your body pointed in the direction of the other person and even leaning in to them says that you're engaged in the conversation and really listening to what they have to say," says Marciniak. It's a little trick that can have a big impact.

4. The Tone Of Your Voice

Most of us can't control the sound of our voice, but we can control our volume and overall tone. And that's important when trying to make a good impression. "Tone, volume, and energy level is picked up by most people," says business strategest Kevin Huhn. "They can be 'blind' (i.e., not see you face-to-face or on a screen) and still feel the vibe you send off."

It may seem like such a simple thing, and yet nervous ticks — like nail biting or tapping your foot — can really throw people off. As psychic and spiritual counselor Davida Rappaport says, "People can perceive this as a bad habit, or they may think you are nervous or stressed." If you're in a job interview or on a date, that's the last vibe you want to send out.

6. Whether Or Not You're Wearing Sunglasses

OK, so this one may sound strange. But it makes sense, when you think about it. As Hugn says, swearing sunglasses can "actually give off the vibe there is something you are hiding." If you walk around with shades on all the time, it can truly make you seem, well, shady.

Again, body language plays a major roll when it comes to how people perceive you. "Poor posture carries an energy with it," postural specialist Vivian Eisenstadt, MAPT, CPT, MASP tells Bustle. "It can be read as lack of self-confidence, shyness, and closed communication. Standing straight exudes a sense of pride, confidence, and promotes happiness." So you probably want to go with the latter, instead.

8. Whether Or Not You're Dressed For The Occassion

When meeting someone new or attending an event, do your best to dress for occasion. "If you arrive at an event and you are not dressed appropriately, many people may be turned off by your appearance and ignore you," Rappaport says. Or, they might think you're kinda rude, or that you just don't care. And none of those are feelings you want to project.

9. Cutting People Off When They Speak

We all interrupt to some degree, but that doesn't mean it's a habit worth keeping — especially if you mix it in with your tendency to play the part of grammar police. "If you tend to correct someone’s grammar or cut them off in mid-sentence or thought, you may be perceived as rude," Rappaport says. Make an effort to slow down and truly hear someone when they speak. I promise they'll really appreciate.

I'm all for cursing like a sailor, if that's what you like to do. Here's your friendly reminder, though, that it's not always great to do in mixed company — or when trying to make a good impression. "It would be wise to save those words when you are really angry," Rappaport says. "Or when retelling a story in which those words are integral to the story." That way they'll pack more of a punch.

It's really no one's business what you do with your hair, or if you show up with makeup. Do you, and stick with whatever feels best. That said, there are some basic grooming habits we should all follow, lest we turn people off. As Rappaport tells me, this often includes wearing some kind of deodorant, shower (especially after exercising), and brushing your teeth.

Keep in mind, though, that none of this is meant to make you feel self-conscious. If you forget to put on deodorant, to truly hate making eye contact, all is not lost. You can still be perfectly charming and likable in multitudes of other ways.