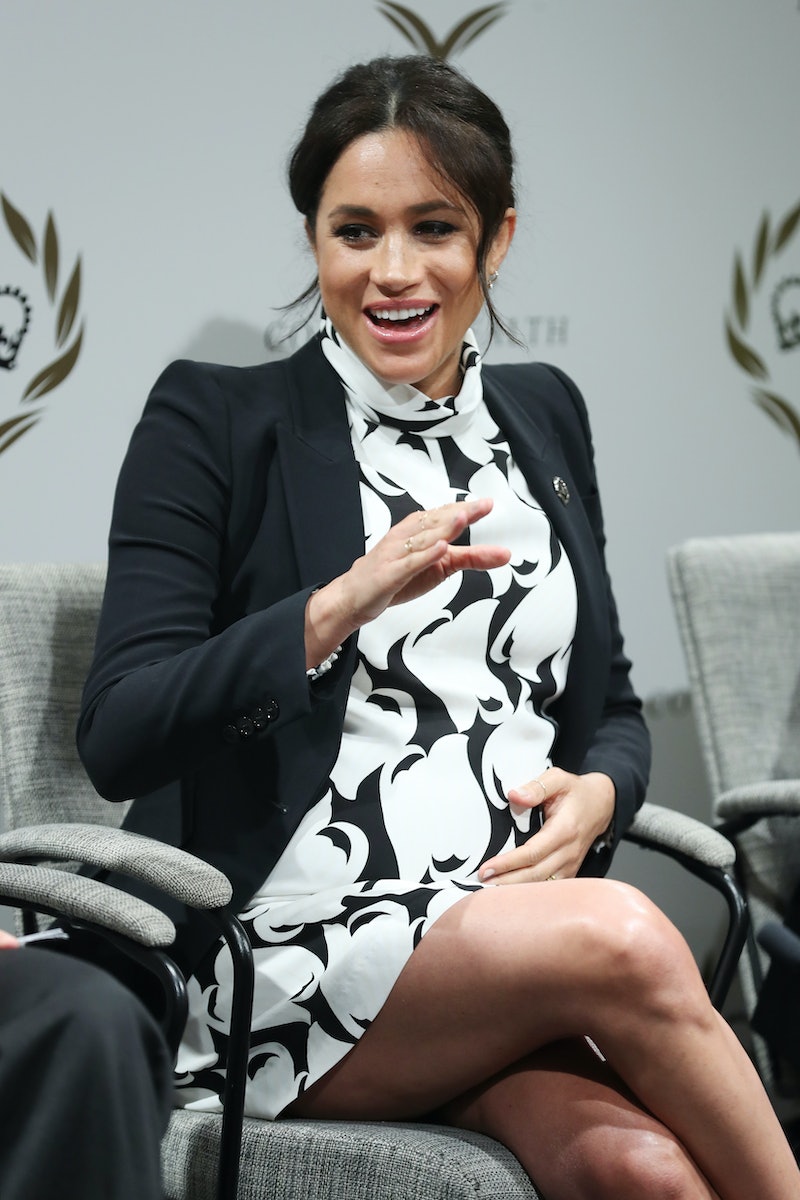 Meghan Markle's signature hair is probably her messy bun or her classic waves. As it turns out, she's got a sartorial equivalent to that famous bun. If you've been paying enough attention to the Duchess of Sussex's style, you may have noticed that she just might. Meghan Markle's blazers seem to pop up quite frequently, and it seems that her collection is certainly one to be envied. From oversized styles to patterned classics worn with pantsuits or jeans, the Duchess knows how to rock a classic blazer look.

On March 8, in honor of International Women's Day, Markle participated in a forum on gender equality. For the event, she chose a black and white abstract print frock, black pumps, and what else? A black blazer from Alexander McQueen (offers sizes 00-12). As it turns out, it's far from the first time that Markle has worn the piece. She's rocked the blazer with a full McQueen pantsuit, a bright green Self Portrait dress (offers sizes UK 4-14), and now on International Women's Day.

Markle may just have a favorite blazer in the McQueen piece, but the style is more than that. Markle seems to be a blazer queen — even though she's actually a duchess. Whether it's a piece from her BFF's clothing line, a fitted, crisp white blazer, or an oversized piece that works perfectly with jeans, Markle's got a penchant for the style, and here are the 14 ways she's styled a blazer.

Markle's first blazer spotting was after she and Prince Harry announced their engagement. She attended the 2018 Endeavour Awards where she wore the same Alexander McQueen blazer she just rewore.

Markle doesn't always wear a blazer in the traditional way. Here, she paired it was a dress but slung it over her shoulders.

While Markle's gorgeous spring dress is the star of this sartorial show, her blazer is the perfect neutral balance to the green frock.

Markle doesn't just switch up the way she wears a blazer. She always switches up their styles. This Givenchy blazer (offers sizes 0-12) is much more cropped than more traditional pieces that fall to the hip.

A shorter hem and a daring style? This may just be one of the best ways Markle has ever styled a blazer.

7. With A Turtle Neck

Markle's pinstriped white blazer and turtleneck combination is so classic.

Markle's crisp, clean white blazer looks so chic on her, but can you imagine trying not to spill something on it?

Markle's monochromatic blazer and dress look is totally her style.

Somehow, Markle totally makes this blazer work with the asymmetrical hem line of her dress.

Markle's blue blazer and black shirt and jeans totally break the old fashion rule of not wearing black and blue together. This isn't the first time Markle has broken the rule, though.

Markle has definitely come full circle with her blazers. Her latest choice is her International Women's Day look which features the same piece she wore to the Endeavour Awards in 2018.

Clearly, Meghan Markle's blazer collection is next level, and with all the ways Markle styles the piece, she may be proving that it's the most versatile wardrobe staple out there.