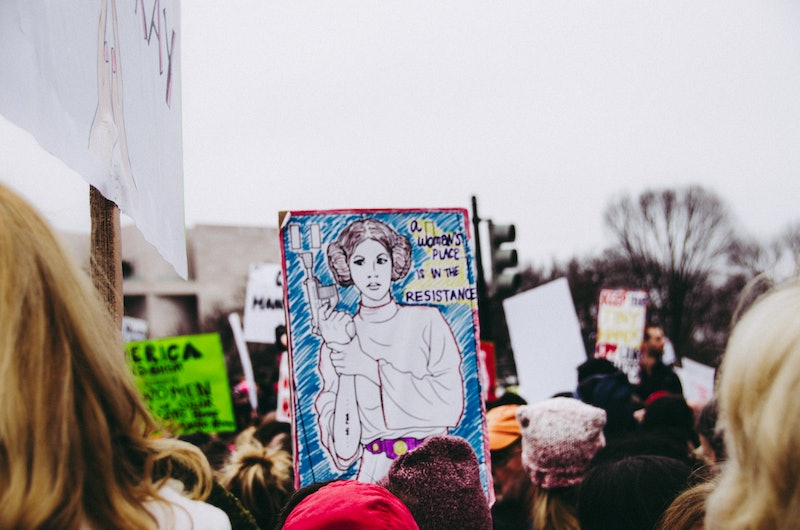 Fun fact: August 26 is Women’s Equality Day. Not a fun fact: We’re observing this particular Women’s Equality Day at a time when women’s rights are in danger in some subtle, insidious ways. Nor is it just women; every marginalized group in this countfry is under threat. And on a day that we’re meant to be celebrating a great achievement and finding a path forward to achieve even more, we’re instead finding ourselves fighting to maintain ground we’ve already won.

The U.S. Congress designated Aug. 26 as Women’s Equality Day in 1971 to commemorate the day in 1920 on which the 19th Amendment, which secured women the vote, was officially adopted. (It had previously been passed by Congress on June 4, 1919 and ratified on Aug. 18, 1920.) Like the 15th Amendment, which was passed in 1870 and granted black men the vote, it’s a Big Effing Deal; after all, voting is what makes democracy run, and if everyone who lives in a democratic country does not have a voice in the process, then it’s not really a democracy. Indeed, even the passing of the 19th Amendment didn't guarantee everyone the vote; as the National Women's History Museum points out, black women were still often denied the vote due to state laws and vigilante practices until the Civil Rights Movement of the 1960s.

The joint resolution from both branches of Congress declaring Women’s Equality Day acknowledged that women in the United States have routinely been treated as second-class citizens, that women have fought for equal rights, that women have achieved equal rights, and that women are to be “commended and supported in their organizations and activities.” An additional call to action from the Women’s Equality Day website, however, not only “recognizes the commemoration of that day in 1920, on which the women of America won their right to vote,” but also considers the day “an opportunity to continue to work for equal rights for all citizens.” Because there’s still work to be done for all marginalized groups and people.

What’s somewhat upsetting, though, is that we’re not just having to fight for rights that, absurdly, haven’t yet been achieved; we’re observing this Women’s Equality Day knowing that we’re deeply embroiled in a battle to defend the rights we already have. It seems absolutely unthinkable that we should have to fight to keep from losing rights we’ve already gained — and yet, here we are.

Here are five ways women’s rights are currently in danger — but also, here are some ways to fight back. And we'll keep fighting, for as long as we have to, until there is no longer any need.

Why it matters: All of this has major implications for women’s health (and, really, everyone’s health). For many people, Planned Parenthood is the only affordable health care option anywhere near them. And without access to the services Planned Parenthood provides, some of the country’s most vulnerable populations — low-income women and women of color — suffer greatly. We’ve seen it happen in states like Wisconsin and Texas: STDs and rates of unplanned pregnancies rise; cancer screenings become difficult or impossible to access; and on, and on, and on. Many are concerned that individual states defunding Planned Parenthood will result in a snowball effect, with other states following in short order — which also continues to fuel the effort at the federal level.

Until recently, the idea that a quote like this could be accurately attributed to the President of the United States was outrageous. Yes, other presidents have done or said questionable things. No, not all prior presidents have been paragons of virtue (and, indeed, many were far from it). But the idea that we as a country could elect someone to the highest position of power in the country knowing that this is who they are was bananas… until now. And all of the work that we have done so far to dismantle rape culture — both on an ideological level and a legislative one — is in danger of being undone because of it.

Why it matters: When rape culture is sitting in the White House, it excuses sexual assault. It reinforces the idea that “boys will be boys,” and that we all just need to allow that to be the case. It makes it OK for legislation under serious consideration to target sexual assault survivors. It denies us the right to bodily autonomy — to decide who touches us, and when, and how, and who does not put a finger anywhere near us. It teaches people that they are entitled to other people’s bodies — to do whatever they want with other people’s bodies.

None of this is OK.

The White House Pay Gap Is Growing Under The Current Administration

In Trump’s White House, the gender pay gap between staffers has tripled in the months since he took office, according to the Washington Post; women now tend to earn around 63.2 cents to each dollar men make. It’s a gap of 37 percent — which is also more than double the national rate (about 17 percent).

Why it matters: It’s true that the White House isn’t the entire country — but the implications of what it means for the Commander-in-Chief’s staffers not only to have such a terrible gender-based wage gap, but for that gap to be growing (and at such a shocking rate, at that) are huge. It’s hard to envision an administration where this is the norm making efforts to shrink, let alone eliminate, the gender wage gap nationally — and although Pew Research Center data from 2015 indicated that the gap was narrowing at the time, we might be looking at a very different story once 2017’s numbers are available. Indeed, we’ve already seen things starting to take a turn for the worse: Just prior to Equal Pay Day, Trump rolled back the Fair Pay and Safe Workplaces Executive Order, which, as Bustle’s Joseph D. Lyons noted in April, contained essential protections for working women.

All this, by the way, is even without considering the many other issues affecting the wage gap, including sexual orientation, gender identity, and race — also not issues the administration has shown much interest in fighting.

14 states issued measures ostensibly meant to combat voter fraud prior to the 2016 election. Earlier this year, Trump's Presidential Advisory Commission on Election Integrity requested all states to send in their voter registration data, also ostensibly to help combat voter fraud. Trouble is, most of these measures aren't actually fighting voter fraud; indeed, in many cases, they're actually resulting in voter suppression. In May, for example, North Carolina was found by the Supreme Court to have gerrymandered districts to suppress black votes.

Why it matters: Most of the voter suppression that’s occurring due to things like gerrymandering (as is the case with North Carolina) is affecting low-income communities and people of color. Indeed, study published this year found that voter ID laws do “have a differentially negative impact on the turnout of Hispanics, Blacks, and mixed-race Americans in primaries and general elections.” The irony of this being the case as we observe Women’s Equality Day — which, as a reminder, commemorates the passage of an amendment that made the vote a constitutional right for people who hadn't previously had it — is terrible. And it has been terrible for a long time.

There is arguably no more sacred right in a democracy than the right to vote — to have your voice count when it comes to selecting the people who will represent you in the government. To threaten that right is probably the most un-American thing there is.

On Jan. 23, 2017, Trump reinstated the Global Gag Rule, which prohibits the U.S. government from giving foreign assistance to nongovernmental organizations which “perform or actively promote abortion as a method of family planning in other nations.” It’s a policy that affects pretty much everyone with a uterus, many of whom are women.

I see a lot of men. White, wealthy, privileged cisgender men who do not have uteruses, who cannot get pregnant.

Why it matters: These are the folks who are calling the shots when it comes to women’s bodies. Women are being denied the right to determine what they do with their own bodies, despite the fact that abortion is both safe and legal. But with abortion rights being chipped away at by rooms full of men like these, there's a concern that our access to the procedure will be eliminated without our say so. Just look at what happened in Texas recently. The fear is not unfounded.

So: We fight. We call our representatives. We donate time, money, or skills where we can. We show up for each other. We operate on both the large and the small scale. And together, we make a difference.