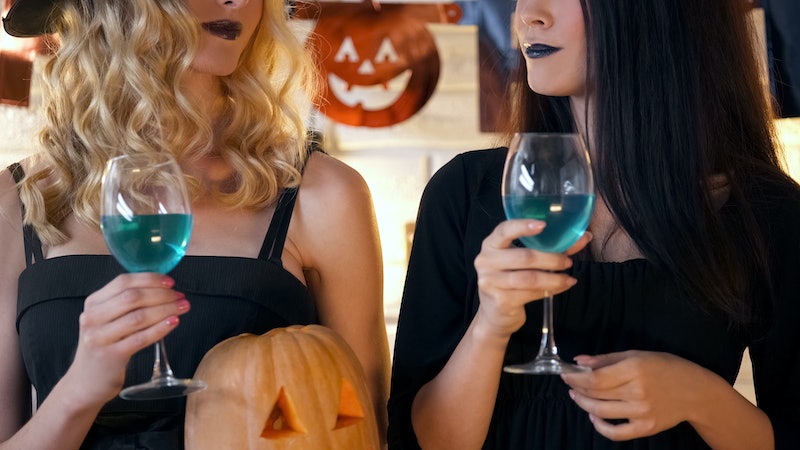 Halloween is always spooky, what with our cultural obsession with scare-inducing Halloween costume ideas, creepy-cute Halloween home decor, and of course, every teen slasher film of the '90s. But this year has the potential to be even spookier than normal, if the astrology of Halloween 2019 is to be believed: According to the stars, we may be feeling extra spooky vibes once All Hallow's Eve rolls around. Everyone's gonna feel this energy, but a there are a few zodiac signs who will have the spookiest Halloween of all, according to professional astrologers. Bustle chatted with a few of them to get the inside scoop.

But firstly, let's talk planets. Everyone's favorite (read: least favorite) transit, better known as Mercury retrograde, is literally beginning its always-horrifying reign of terror on — you guessed it — Halloween day, Oct. 31. Wooooo. ICYMI, Mercury retrograde is known for its ability to cause all sorts of communication mishaps, technology breakdowns, scheduling conflicts, and other not-so-fun daily dramas, so it's certainly an astrological transit to plan ahead for (like, you may or may not want to leave your house on Halloween). (Just kidding.) (Kind of.)

This particular retrograde, which will be the planet's final backspin of the year, takes place in the hella intense sign of Scorpio (and right smack in the middle of Scorpio season 2019), meaning we'll be dealing with issues pertaining to our deepest, most emotional secrets, shames, and desires. This transit isn't here to mess with us — in fact, it's here to help us grow and slow down before we make rash decisions — but I suggest we brace ourselves nonetheless, cause Mercury retrogrades are always a little scary.

Meanwhile, the lovely but moody Miss Moon will be traveling through the fiery and philosophical sign of Sagittarius come Halloween. Sagittarius is open-minded and deeply interested in exploring every inch of every realm, meaning that emotionally, we might find ourselves more open to and drawn to the paranormal. Dreamy, illusive planet Neptune will also be squaring the Sag moon, which can up our psychic energy and make us almost eerily perceptive. All in all, it's a recipe for for a mystical Halloween — and possible spook-fest.

Since we're already dealing in the realm of the mystical and magical, it's relevant to note that in many Pagan-based faiths such as Wicca, Halloween is more than just Halloween — it also coincides with one of witches' most important holidays, known as Samhain. "Samhain is a festival of the Dead," explained Circle Sanctuary. "Meaning 'Summer's End' ... Samhain is a celebration of the end of the harvest and the start of the coldest half of the year." During this time (which is also known as the "Witches' New Year"), it's believed that we have more access to the spirits in the great beyond, as the worlds of the living and the dead collide with more ease. As they say, "the veil is thinned."

Halloween also comes just days after a powerful, transformative, and deeply spiritual new moon in Scorpio, which peaks on Oct. 27, so we'll still be buzzing with its hyper-intense energy on the 31st. When a new moon falls in the mysterious sign of Scorpio, as it does once a year, it's sometimes referred to as the "Lunar Samhain," so the energy of crossing between world's as well as the themes of death/rebirth are strong. Spooky vibes truly are abound.

That said, some sun signs might find themselves feeling even more in touch with the spookier sides of Halloween, and Bustle spoke with a bunch of professional astrologers to get their take on the zodiac signs who will have the spookiest Halloween 2019 of all.

"Aries will have the most spooky Halloween!" astrologer Lisa Stardust shares, speaking with Bustle about Halloween's spooky vibes. Come Halloween, planet Mercury will begin its retrograde through Scorpio, which will take place in Aries' mystical eighth house — aka the house which rules mysteries and transformations of all sorts, covering everything from sex to birth to death. Heavy stuff. That said, they'll be diving deep into examining life's existential quandaries.

"Aries will be enjoying a spooky time, with her eighth house naturally activated by planets in Scorpio," adds astrologer Kimberly Peta Dewhirst, creator of Star Sign Style, who also spoke with Bustle. "What’s more, the retrograde motion of Mercury will allow her to deep dive towards all things beneath the surface — and the thinning veil — around Halloween, particularly since Mercury will trine Neptune (which is the planet of collective consciousness, of transcendence and of its own kind of endings)."

With this transit, Aries may be more open to the world of the invisible and in touch with their extra sensory perception on Halloween. "[Aries] will have an arsenal of power and intuition at their disposal," Stardust continues. "They’ll be able to ignite and lean into the spiritual world freely. Their psychic strength will be on fire."

"Gemini and Gemini Risings will have the spookiest Halloween due to Saturn being in their eighth house — the area of transformation, death, and intense bonds," explains Dewhirst of Star Sign Style to Bustle. "It's the eighth house in astrology that’s responsible for our sense of mortality, and Saturn is the planet of karma, consequences, and death. With Pluto, Saturn, and the South Node all in this zone (plus the Moon joining them in Capricorn by the weekend), Gemini could be wrestling with their limits and finite selves." With such intense planets in arguably the most intense house, you can bet things will feel spooky.

But don't forget about Mercury retrograde. Gemini is ruled by messenger planet Mercury, which as you know, is about to start its slightly-terrifying backspin on Halloween day. With its ruling planet taking a backspin and leaving all of us in the dust communication- and timing-wise, Gemini should expect the unexpected in all the spookiest ways. "Gemini will see spooky surprises around every corner, and persistent offers to make mischief," explains astrologer Lexi Ferguson, who also shared her take on the signs feeling the spookiest Halloween vibes with Bustle. "Big adventures await with their apocalypse team."

"Scorpio season activates Gemini's sixth house of well-being, lifestyle and help, and with a Mercury Retrograde starting on Halloween, they could already be feeling the pull inwards, to reflect on who is able to work with them in a loyal and trusted capacity," continues Dewhirst. "Mercury Retrograde in Scorpio is bound to present some spooky conversations for us all though!"

Earthy, grounded Virgos aren't typically the easily-spooked type (unless, of course, it involves a messy, unkempt bedroom closet or a sloppily-organized Google calendar) — but did you know that the sign of Virgo is also ruled by planet Mercury? Yep. For that reason, some astrologers believe that they'll be feeling the spooky energy in equal measure to Geminis, and for similar reasons. With their ruler Mercury backspinning itself into a brand-new retrograde period starting Halloween, you can bet Virgos will be feeling the energy on an even more intense level, and having Scorpio rule the retrograde will put them in touch with a more mystical side of themselves.

"This Halloween is going to be totally spooky for ... Virgo! Why you ask? Because their home planet Mercury is going into retrograde right in time for the Tricks and the Treats," shares astrologer Kristy Belich, who spoke with Bustle and notes that both Virgo and Gemini will be sensin' the spooks this Halloween. "Psychic moments, telepathic connections, and deja vu are totally possible for these mutable friends! You’ll definitely be feeling your 'spidey senses' this year," she explains.

Scorpio has a lot going on this Halloween. Firstly, the spookiest holiday of the year always takes place during their sun season, so spooky is kind of their thing. But secondly, they've got a lot of different planets' energy (including freshly-retrograding Mercury) vying for attention in their sign, and their penchant for the occult is going to take a front seat. "If you've got lots of Scorpio energy in your chart, Halloween week will be ripe with unexpected and potentially spooky happenings, as the sun in Scorpio will form an opposition to Uranus, our favorite weirdo of the zodiac and planet of fun and freaky surprises," explains astrologer Emmalea Russo, who spoke with Bustle. "All hallows Eve will be extra electric for all of us, but Scorpios will feel that ghostly buzz most dramatically."

"Scorpios are gonna take the cake this Halloween and make their favorite holiday extra weird," adds astrologer Caitlin McGarry, who also spoke with Bustle and agreed that Scorpios are stealing the spook spotlight. "Most Scorpios relish in these cryptic celebrations — but on the same night, Mercury turns retrograde in their sign, making it a night of possible mayhem. Sex drugs & rock'n'roll is definitely on the menu for these wild cats."

As other astrologers pointed out, there will also be a stellium taking place in Scorpio come Halloween, meaning that multiple planets will be clustered in the same sign, so the energy will be extra intense — and will force Scorpios to do some deep, transformational, and potentially scary self-work. Six the Sexstrologer chatted with Bustle to weigh in. "Scorpio is the only of the 12 zodiac to have a stellium in their sign. With Venus, Mercury Retrograde, and the Sun all transiting Scorpio’s house of self — and the transit Uranus in their house of close relationships making an opposition to the Scorpio sun — Scorpios are going to find that Halloween could highlight qualities about themselves that they might of overlooked," explains Six. "Scorpios Halloween will be one of the spookiest because many might find themselves having to look under their mask."

The moon is emotional and mystical, and it can often bring out the more vulnerable, fearful shadow sides of our personalities. Come Halloween, our nighttime luminary will be in Sagittarius, meaning Sag sun and rising signs will feel the dark and emotional lunar energy in their house of self. According to astrologers, this could cause dreams and visions of a mystical (and possibly spectral) variety. "Sagittarius’s may have some spooky moments, as their dreams may prompt them to have visions or nightmares," explains Stardust to Bustle. "They’ll definitely need time to meditate and unwind, as they may feel haunted by spirits."

Haunted? It just might be so. We'll be fresh off the intense energy of October's new moon in Scorpio, so it'll be advisable for Sagittarius to do some protection rituals or work with crystals to build up their energetic shield.

Two of the zodiac's spookiest, most nerve-wracking planets — Pluto and Saturn — will be meeting in the Saturn-ruled sign of Capricorn this Halloween, which will give Caps an intense and even mystical ride through the dark side. "With Pluto, Saturn and the South Node still conjunct, Capricorn is having a karma and dharma party, helping us purge all the soul goodies," shares astrologer Nura Rachelle, who spoke with Bustle about her Halloween spook predictions. "Some may be sweet, some sour, but all bringing us closer to alignment with our soul desires."

Pluto, ruled by the god of the underworld, is the slow-moving planet that governs our subconscious, karmic debts, and matters of extremes. Saturn, on the other, rules over our boundaries, restrictions, challenges, and struggles. Combine the two and you've got a hell of a karmic ride. While Capricorn will definitely be in the spook-tastic Halloween spirit this year, Rachelle advises we all look to see how this transit might be creepily affecting us come Halloween: "Look in your birth chart for where you have Capricorn between 11-20 degrees to see where you can integrate what might be haunting you!" she shares.