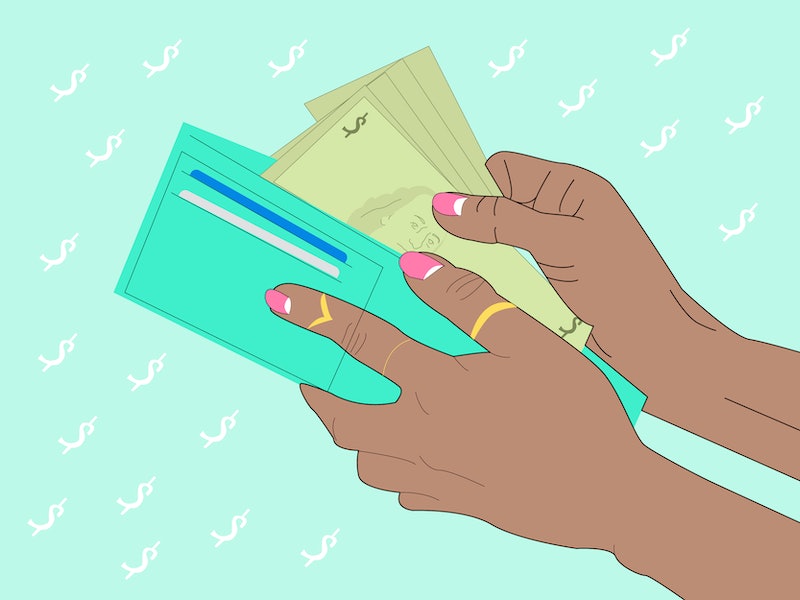 According to a recent survey on Americans spending habits, the average person in the United States spends $18,000 on “nonessential” items every year. The analysis of the survey results recommends that Americans cut spending in one or more of these “nonessential” categories in order to be able to afford more “important” things — but although this advice might seem sound at first, it’s actually less useful than you might think. For one thing, it makes a lot of assumptions about what makes an expense “essential” or “nonessential”; for another, those assumptions assign a moral value to people’s spending habits and shames them if they’re not spending their money on the “correct” things; and ultimately, it fails to take into consideration nearly all of the societal factors that contribute to wealth inequality that are often outside of people’s control.

It’s no wonder the general response to the survey has been observations (via Twitter) like, “There's a lot of Boomer nonsense going on here, but the idea that personal grooming is nonessential is wild. Like, yeah, you can live without it, but you can also be fired for not properly performing it, so wtf is the truth?” and “You gonna do a list on all the ‘nonessential items’ Corporate CEOs buy while not paying taxes and denying their workers healthcare and a living wage?”

The survey, which was commissioned by life insurance company Ladder for National Life Insurance Day, carried out by research firm OnePoll, and recently summed up by The Motley Fool (via USA Today), asked 2,000 adults in the United States about what they spent on “essential” items versus “nonessential” ones, in addition to checking in about how they felt about their spending habits. According the results, 70% of respondents said they probably could be making “smarter decisions” about their spending; what’s more, 58% of respondents said they weren’t able to afford some things they thought were important, like contributing to a retirement account. Based both on factors like these ones and the fact that the average American spends $18,000 a year on things deemed “nonessential,” like streaming service subscriptions and eating out, the analysis of the survey results concluded that “Americans may be able to afford essentials more easily than they think, just by tweaking their spending habits.”

For the curious, here’s the breakdown of which “nonessentials” Americans their money on each month and the average amount they spend on them:

Is it generally a good idea not to spend money you don’t have? Yes. Of course, it’s not usually that simple — poverty is expensive, student loan debt is real, costs of living are skyrocketing, and wages are stagnant, among many, many other issues. But if you’re privileged enough to be in a position where you can afford not to have to spend money you don’t have, then it’s usually advisable to, y’know, do that. Is it also usually a good idea to take care of paying things like your rent and utility bills before spending money on things like dinner out? Also yes. Prioritizing your spending can help you out in both the short term and the long run.

But the thing is, “nonessential” is a BS term. It’s true that many of the items on the survey's list aren’t things we absolutely require in order to survive — but that doesn’t make them nonessential. And the advice to simply cut out some or all of these “nonessential” items in order to save big bucks is flawed, regardless.

Take personal grooming expenses: They may not be “essential” in the technical sense, but being well-groomed can affect how you’re treated by other people, both in the world in general and in the workplace in particular — especially for women and femme-presenting people. Our culture is still such that women and femme-presenting people are expected to perform a certain amount of grooming on a regular basis — we’re told that if we don’t wear the right kind of makeup, or style our hair in a specific way, or keep our fingernails manicured, we’re being “unprofessional.”

These absurd biases have a measurable impact on us: Research has found that women who wear makeup at work are perceived to be more competent, as well as more likable and trustworthy, than women wearing either less makeup or no makeup; at the same time, though, women who wear “too much” makeup at work are perceived as lacking leadership qualities. Black women still deal with heavy bias against natural hair in the workplace and are often penalized as a result. Everything from your hair color to how you smile can affect whether hiring managers will actually hire you — if you’re femme-presenting. Men aren’t judged anywhere near as harshly based on their appearance. For many of us, personal grooming isn’t “nonessential” — it’s absolutely essential if we want to advance at all in our careers.

Or take buying a cup of coffee from your favorite coffee shop: Sometimes, it’s not just about the coffee. For what it’s worth, I am the kind of person who tends not to buy coffee out that frequently; I’m perfectly happy to make it at home. But the times that I do buy a cup of coffee instead of making one myself, it’s as much about being out while having the coffee as it is about the coffee itself. It’s about curling up in an armchair in a cozy café, reading a book and drinking my drink while it snows just a little bit outside. It’s about sitting in the park with something cool and refreshing on the first day of sunny, warm, spring-like weather after a long winter. It’s about kicking my way through falling leaves with something to sip keeping me warm while I do it. The price of a cup of coffee is cheap compared to what I get out of these experiences. And I’d be extremely surprised if I was alone here.

Or take rideshares. They might be more expensive than some alternatives; however, they can also be a matter of safety. Not everyone lives in areas with good public transit systems, or with public transit that runs 24 hours a day. If you live in such an area, go hit the bars with some of your friends, and your only other option is to try to drive yourself home at the end of the night, rideshares are a godsend. (Remember that whole thing where drinking and driving is dangerous, both to you and to everyone else on the road, as well as illegal?)

And concerning bottled water? Well, here’s your reminder that Flint, Michigan, has not had clean, drinkable water flowing from its taps for five years. If you live in Flint — or in any other place that lacks potable water — bottled water actually is necessary for your survival.

That’s just scratching the surface, too — there are loads of arguments to be made for each of these “nonessential” items actually being essential in some way, shape, or form. The point is that the monetary value of a thing is not the only value it has.

What’s more, as Sallie Krawcheck of Ellevest put it recently at FastCompany, telling people to stop getting coffee or cut their Netflix subscription doesn’t do anything to combat the bigger problem: the systemic issues that contribute to wealth inequality. Instead, it places the burden of relieving that inequality on the people suffering at the hands of those systemic issues.

Wage gaps exist, from gender-based ones to racial ones. There are also debt gaps and investing gaps. The pink tax is a thing. All of these factors affect how much, if anything, pretty much anyone who isn’t a white, straight, cis man is able to save — and they all twist together into one giant knot of terribleness. You can see the problem, for example, in shaming women and femme-presenting people for spending money on personal grooming when their success at work depends so much on their appearance — and also knowing that they’re paid less than their male counterparts for the same work (and even less if they’re women of color) — and also knowing that grooming products aimed at women are priced higher than grooming products aimed at men… right?

Advice that tells you what not to spend your money on in order to save more isn’t helpful. You know what is helpful? Advice on how to create a budget based on your own needs, not what someone else thinks your needs should be. Legislation that curbs things like the pink tax and helps with things like student loan debt relief. Dismantling the biases that contribute both directly and indirectly to financial gaps. Things like that.

Will depriving yourself of a coffee help with that? Probably not.

More like this
Gemma Collins' Net Worth Is Only Going Up
By Catharina Cheung
What Is Brad Pitt’s Net Worth? The Bullet Train Star Now Makes 8 Figures Per Film
By Hugh McIntyre
What Is Beyoncé's Net Worth? The 'Renaissance' Hitmaker Makes 9 Figures On Tours
By Radhika Menon
15 Genius Storage Solutions For Your Next Bathroom Refresh
By Emma Garza
Get Even More From Bustle — Sign Up For The Newsletter