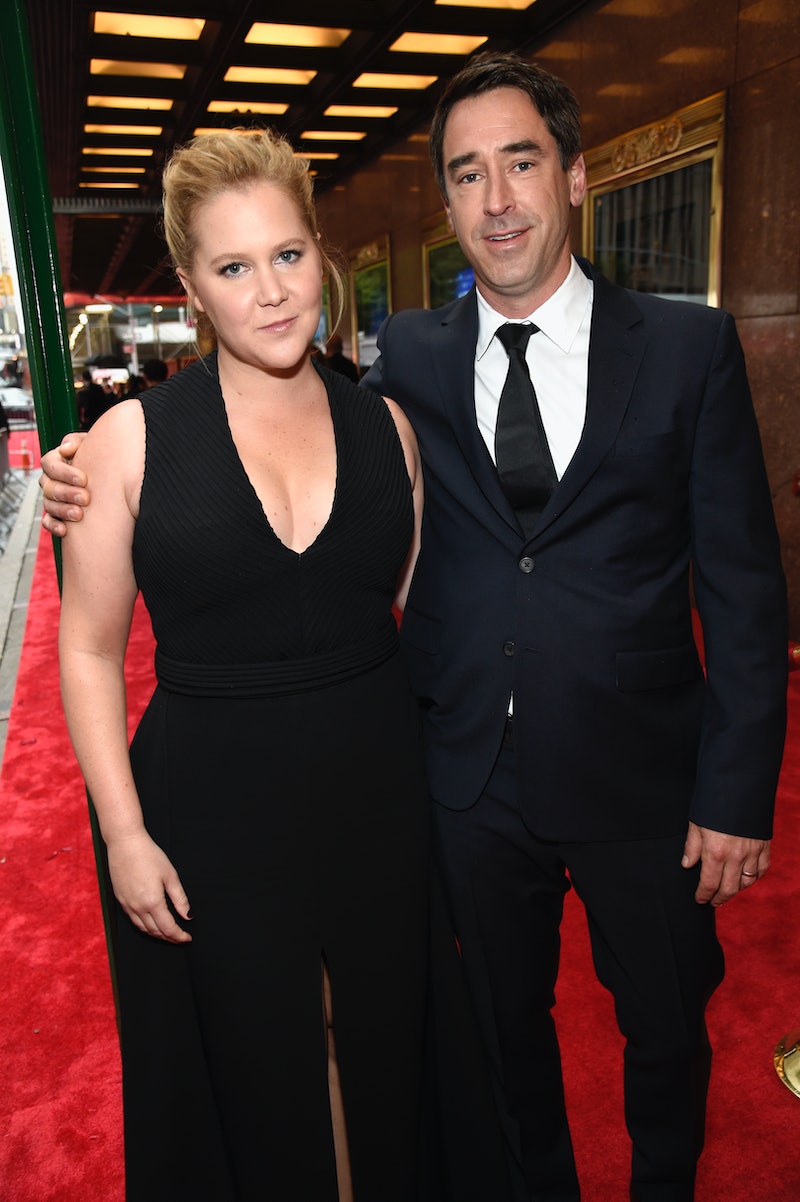 Sometimes it might seem like romances in Hollywood move fast, but that doesn't mean they aren't meaningful. Take this celebrity couple. Amy Schumer and Chris Fischer's relationship timeline shows that every love story moves at its own pace.

Schumer and Fischer, a chef, got married in February of 2018, after reportedly only dating for a few months. But, speaking to The View of her seemingly fast wedding in April of that year, Schumer said that, while her wedding may have been fast by some standards, it wasn't done without forethought. "We have known each other for about a year now and we’ve been living together already for six months,” Schumer explained at the time. “So you know it’s not a long courtship but it’s not like we had a great weekend in Vegas and threw in the towel."

In fact, Schumer and Fischer actually met long before they even started dating. While chatting with Howard Stern in April 2018, the Trainwreck star revealed that she originally met Fischer through her personal assistant, Molly, who also happened to be the chef's sister. But it wasn't until they planned a birthday party for her friend, comedian Rachel Feinstein, that she and Fischer really hit it off.

Over two years since their wedding, Fischer and Schumer are now parents to 1-year-old Gene, and they're about to embark on a brand new adventure: a cooking show. On the Food Network's Amy Schumer Learns To Cook, the comedian will be taking lessons from her husband to learn the art of cooking in quarantine. And before we dive into cooking with the Schumer-Fisher household, here's a look back on how they got here.

In the fall of 2017, Entertainment Tonight reported that Schumer and Fischer were spotted for the first time together. They were photographed having a candlelit dinner in New York City.

Three months after romance rumors first surfaced, the couple confirmed they were in a relationship. On Instagram, Schumer posted a photo kissing Fischer from when they attended Ellen DeGeneres' 60th birthday party, which a slew of celebrities attended.

Not long after confirming their romance (four days to be exact), Schumer also announced the two had gotten married. The wedding was secret, small, and fast. They said "I do" in Malibu, California in front of many fellow famous faces, including Jennifer Lawrence. Schumer also told Stern in April 2018 that she only planned their special day in three to four days. She even admitted she sent a text to family and friends saying, "I’m getting married on Tuesday. I hope you can come."

In October 2018, Schumer announced she was pregnant with her first child. In typical Schumer fashion, she teased the exciting news next to a photo of her and Fischer's faces photoshopped onto Meghan Markle and Prince Harry's bodies, who also announced around the same time that they were expecting their first child.

In May 2019, Schumer announced she gave birth to her son with Fischer. Seeing as she and Markle were on similar pregnancy timelines (and announced their births on the same day, May 6, 2019), Schumer captioned an Instagram in the hospital with Fischer and her son, "10:55 pm last night. Our royal baby was born." A couple days after giving birth, Schumer announced her son's name, Gene Attell Fischer, alongside an Instagram of herself, Fischer, and their new baby boy.

Less than one year after Gene's birth, Schumer and Fischer changed his name, well, his middle name. After the internet pointed out that Gene's first name and his original middle name, Attell, sound like "genital," they changed it. Schumer noted in an April 2020 Howard Stern Show interview that it "never dawned on me." She also pointed out that when you combine those two with Fischer's last name their son's full name sounds like "genital fissure." Gene's new middle name is "David" in honor of Schumer's father, Gordon David Schumer, and Dave Attell, Schumer's friend and fellow comedian, where Gene's first middle name came from.