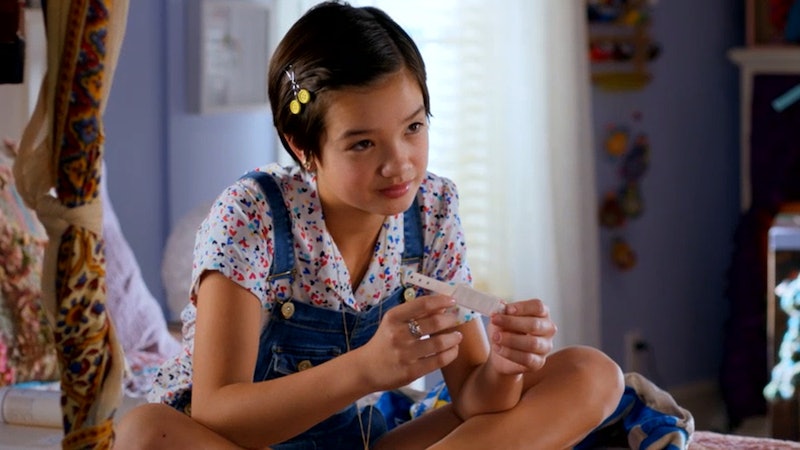 Shows aimed at kids are left out of the peak TV conversation far too often. In an era when series are reaching new heights across the board, it should come as no surprise that children's television is riding the very same wave. At the top of the pack is Andi Mack, the single most underrated show on TV, period. Is that bold statement? Sure, but this show is deftly handling modern issues while doling out quality family drama like nothing else.

Andi Mack is from the creator of Lizzie McGuire, Terri Minsky, and it follows Andi, an Asian-American teen whose entire world is turned upside down in the first episode. The Disney Channel show quickly reveals Andi's cool, older sister Bex is actually her biological mother, and the people she has believed are her parents for the past 13 years are actually her grandparents. It's a shocking twist that puts the focus of the story on three generations of women all grappling with the choices they made that led to this point. At its core, Andi Mack is a story about mothers and daughters. However, it also finds plenty of time to explore the ache of first loves, standing up for what you believe in, and embracing who you are.

While Andi is the show's focal point, Bex and her mother Celia's complicated relationship is perhaps the show's secret weapon. Celia and Bex's mother-daughter story is the most complex one I've seen since Emily and Lorelai Gilmore's journey ended in Gilmore Girls: A Year in the Life. Celia raised Andi as her own, and she wants her granddaughter to have a different life than the one her daughter had. It's clear through every interaction that Celia has with Bex that while she deeply loves her daughter, she doesn't entirely accept the choices she's made. As for Bex, she wants to be the mother she always dreamed of having for Andi, but she still yearns for her own mother's approval.

Seeing a show aimed at kids add so many layers to its adult relationships is impressive. Right from the start, Andi Mack established that it's not interested in talking down to its audience. It seems to realize the kids watching the show are as exceptional as Andi herself. And Andi is exceptional — so are her best friends, Buffy and Cyrus.

As a trio, these three are artistic, athletic, and neurotic. They grapple with wanting to grow up too fast and middle school crushes, but the show shines in its specificity. In one episode, Buffy is told by a teacher that her natural hair is distracting for the other students, and with her mom deployed overseas, she tries to straighten her hair herself. She ultimately turns to Bex to return her hair to its full, curly volume. In the process, she both refuses to allow a teacher to shame her, and reminds Andi that as weird as her life has gotten, other people's lives are complicated too.

Buffy's hair plight is all too real, and it's not the only time Andi Mack has explored issues facing today's teens. The show recently aired an episode devoted to Andi's fight against the school's outdated dress code. In another, Cyrus tries to act "more masculine" after mistakenly believing his close male friend believes he's too "girly." Much like Buffy and Andi, Cyrus ultimately learns to trust in his own awesomeness, but the lesson is hard won.

While you are likely much older than the show's 13-year-old lead, Andi Mack is filling a void on television for viewers of all ages. It's one of the few shows to focus on an Asian-American family, and it's truly multi-generational — something lots of shows aspire to be, but few truly are. Andi, Bex, Celia, Buffy, and the rest of the characters are richly drawn and grounded. They feel real, and they'll make you cry as often as they'll make you laugh.

In this age of endless TV options, great shows are going to fall through the cracks, but Andi Mack shouldn't be one of them. A show that so beautifully illustrates that growing up is an ongoing process, even for adults, should be essential viewing for everyone.