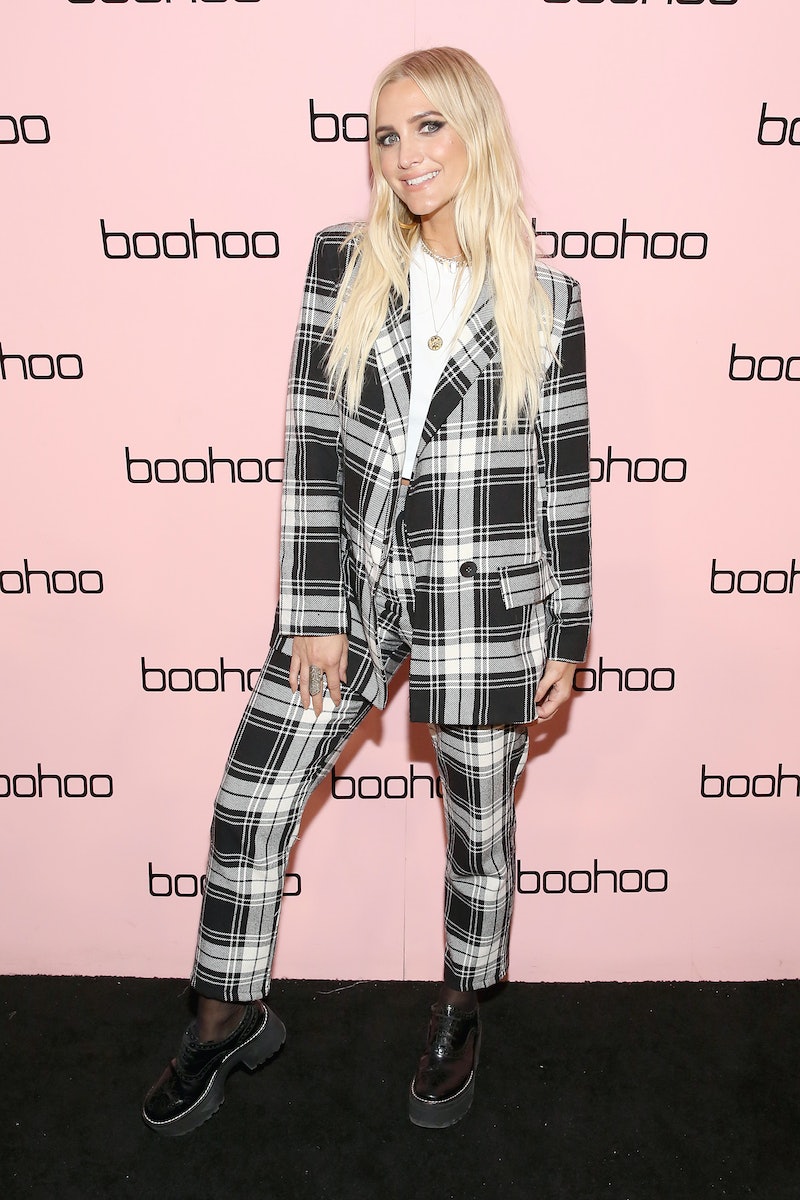 There's a lot happening with celebrities and their hair. From those choosing to chop it all off into bobs to others who are making dramatic color changes, it seems like there a new 'do every day. Today is no different because Ashlee Simpson now has "pumpkin pink" hair.

Hairstylist Riawna Capri, who counts celebrities like Nina Dobrev and Julianne Hough among her clientele, took Simpson from blonde to pumpkin pink according to an Instagram post, and the pair may have just created the new hue of the season.

According to the photo posted to Capri's account, the shade is a mix of smokier hues that you wouldn't usually see in your traditional bubblegum colored hair. To achieve the look, she utilized a mix of blush, bronze, and rose gold colors, and to ensure that Simpson's hair remained healthy, she utilized In Common's Crystal Cashmere System. Plus, according to the stylist, the transformation took only 20 minutes (but keep in mind that Simpson was already blonde, making the transition much easier).

As for why pumpkin pink? Capri didn't explain, but given its alliterative nature and the fall season, why not call it pumpkin pink? Of the decision to take Simpson to this unique fall color, Capri says, "Ashlee looks amazing in all shades of reds and coppers. It's no surprise that she looks absolutely incredible with this smokey shade of rose!"

Simpson's hair change marks something quite different in the world of celebrity switch-ups. While bobs have become the "it" hair-cut of the moment and moves from brunette to blonde or blonde to brunette seem to be everywhere, a pink for fall is pretty refreshing. But Simpson is not alone.

In early October, Lady Gaga took the plunge into pink as well. While celebrating the one year anniversary of the A Star Is Born soundtrack, the singer and actor posted a photo of herself holding a plaque filled with the accolades for the album. Sure, the massive double platinum records were eye-catching, but you couldn't miss Gaga's hair.

Alongside Simpson and Mother Monster, others have also dabbled in a pink 'do. Both Demi Lovato and Taylor Swift tried the color via a dip-dyed look this year, and Kristen Stewart gave it a punk rock edge.

Who knows? Maybe pumpkin pink could be the next big thing.

More like this
Blake Lively Debuts Red Hair For The 'It Ends With Us' Film Adaptation
By Olivia Rose Rushing
The Best Beauty Looks Spotted At Paris Couture Week 2023
By Audrey Noble
Hailey Bieber's New Bob Is Short Haircut Goals
By Olivia Rose Rushing
This Week’s New Makeup Releases & More Beauty Headlines
By Audrey Noble and Erin Stovall
Get Even More From Bustle — Sign Up For The Newsletter
From hair trends to relationship advice, our daily newsletter has everything you need to sound like a person who’s on TikTok, even if you aren’t.