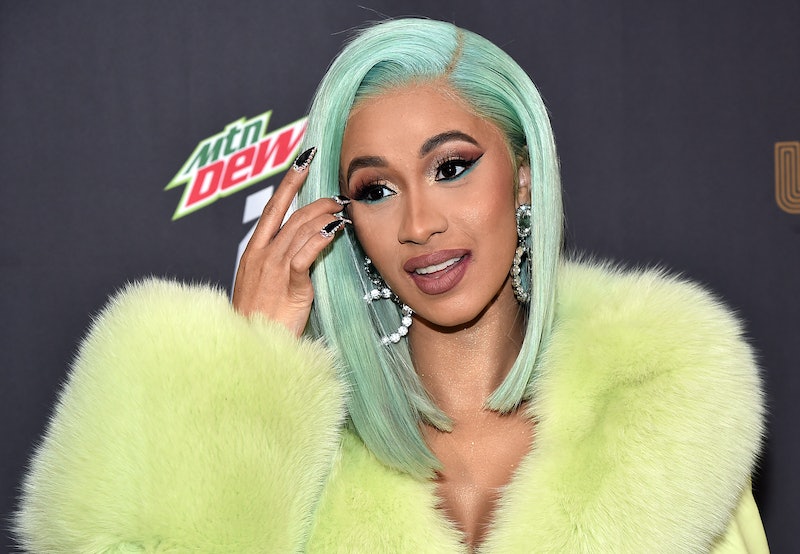 Are you ready for your heart to melt? Because that's about to happen. It also doubles as an example of how some stars are able to manage having a successful career and a happy family life at the same time. Cardi B recently napped with Kulture on a jet, as Us Weekly reported, and the photo she shared of the intimate moment proves how committed she is to being a working mom.

It's been a wild year for the Bronx-born rapper. She shot to stardom in the blink of an eye, and continues to top charts with nearly every track she puts out. In the midst of her meteoric rise to icon-status, Cardi B secretly married Offset of Migos and gave birth to their daughter, Kulture — both within a matter of months.

When Cardi first revealed that she was expecting during a performance on Saturday Night Live in April of last year, tons of fans voiced their support and excitement. On the other hand, though, there were some fans that questioned the rapper's choice to have a child while at the height of her career. It's as if they expected her to just suddenly fall off — but oh, how wrong they were.

On April 23, Cardi posted a new photo to Instagram that shows her snuggled up with Kulture on a jet. "Boutta blast but we missing poppa bear," she captioned the shot. "What a great weekend/holiday we had. Theres nothing more valuable then family time."

First of all, that bed they're in looks real cozy. Like, more cozy than most beds that *aren't* situated in a small space that flies thousands of feet above the ground. It's also a pretty solid size. Bigger than a twin, but smaller than a queen, and perfect for Cardi and Kulture.

Second of all, her picture serves as proof for how the rapper is managing to keep her daughter close while performing all over. She's not leaving her at home with a nanny for months at a time or anything like that. Now, is it safe to assume that she has another caretaker around to help her out? Of course. Plenty of working moms — no matter their profession — need an extra hand every now and then.

In the past, both Cardi and Offset have voiced concern about sharing photos of their daughter on social media. Back in November, the new mom admitted to Entertainment Tonight why she's been hesitant to show fans pics of their bundle of joy.

"I’m scared of sharing her to the world," she told the outlet. "There are too many mean people out there. Sometimes I do want to show people how beautiful and how precious she is," she continued to explain. "She’s so precious. There’s a lot of people that have crazy minds, you know. I want to protect her! She’s my little buggy."

Fans should pretty lucky that Cardi and Offset have decided to give them occasional glimpses into their ultra-famous family life. And for any haters out there who may have doubted Cardi's ability to juggle both her career and her daughter? Well, the proof is in the picture.